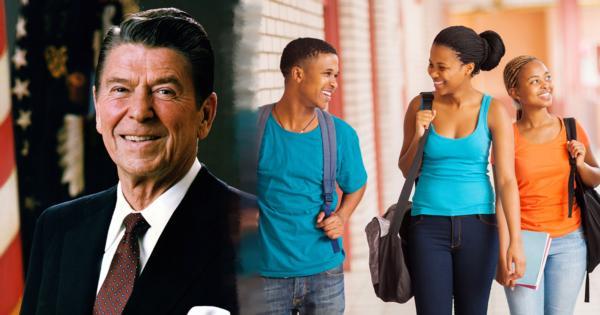 In Anderson’s book, White Rage: The Unspoken Truth of Our Racial Divide, she claims that many of the advancements made by the African American community during the civil rights movement were diminished during the Reagan Presidency, even arguing that Reagan’s policies demonstrated disdain for the black community despite the fact that he “positively oozed racial innocence” on the surface.

“[The war on drugs] replaced the explicit use of race as the mechanism to deny black Americans their rights.”

Anderson also blames Reagan’s cuts to federal programs and workforces for the rise of black unemployment in the early 1980’s, writing, “Thus, just at the moment when the post-industrial economy made an undergraduate degree more important than ever, 15,000 fewer African Americans were in college during the early 1980s than had been the case in the mid 1970s.”

One of the most outrageous accusations is Anderson’s claim that Reagan deliberately created a drug crisis and engulfed African American communities with drugs, specifically crack.

Anderson points out that between 1984 and 1994, life expectancy among African Americans declined and the homicide rate of African American males between ages 14 and 17 increased twice as much, “something that not even slavery or Jim Crow had been able to accomplish.”

Blacks were the intended victims of the drug crisis, she contends, claiming the war on drugs “replaced the explicit use of race as the mechanism to deny black Americans their rights as citizens.”

Anderson did not respond when Campus Reform reached out for a comment regarding her recent book.

In an interview prior to her book release on May 31, Anderson told Emory News that the way Reagan’s presidency is perceived by many as “one of the greatest” is a myth.

“When you look at what he actually did, we’re still living with the devastation,” Anderson concluded. “We’re living with the myth of blacks as lacking initiative, drive and intelligence.”

Anderson added that when student aid cuts were made in the Reagan Administration in the early 1980’s, undergraduate enrollment in the African American community fell by 12 percent.

“You begin to understand what those policies really did,” she told Emory News. “And while the target was African Americans, it took out so many other people: whites, Hispanics, Asians. It just was devastating when you look at Reagan’s policies.”

Not only does Anderson attack Reagan and his policies, she also claims that the struggles the African American community has faced are the result of “white rage.”

“Every time African Americans have made advances towards full participation in our democracy, white reaction has fueled a deliberate and relentless rollback of their gains,” she writes in her book description.

Anderson cites statistics involving high percentages of black incarceration, the lower percentage of blacks with government IDs, and the lower average income of African Americans, which together she believes prove that politicians and white elites are purposely hindering the advancement of the black community.

Her most recent book is inspired by an op-ed she wrote for The Washington Post regarding issues that arose in Ferguson, entitled “Ferguson isn’t about black rage against cops. It’s white rage against progress.”

“White rage recurs in American history. It exploded after the Civil War, erupted again to undermine the Supreme Court’s Brown v. Board of Education decision and took on its latest incarnation with Barack Obama’s ascent to the White House,” her column asserts. “For every action of African American advancement, there’s a reaction, a backlash.”