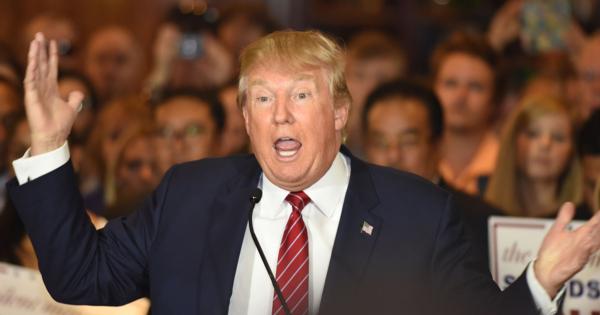 Students and alumni from Donald Trump’s alma mater are denouncing the presidential candidate, saying his campaign “is being used to legitimize prejudice and intolerance.”

More than 2,000 supporters, many affiliated in various capacities with the University of Pennsylvania’s Wharton School of Business, have signed “You Do Not Represent Us: An Open Letter to Donald Trump,” an open letter that began circulating online this weekend.

“Your insistence on exclusion and scapegoating would be bad for business and bad for the American economy.”

Donald Trump transferred to Wharton after two years at Fordham University, graduating in 1968 with a degree in economics. He often cites his prestigious degree as a sign of his intellect and business prowess, though he didn’t make a big impression during college, The Huffington Post reports.

The signers seek to distance themselves from Trump’s campaign, not wanting his reputation to be associated with the school’s.

“We, proud students, alumni, and faculty of Wharton, are outraged that an affiliation with our school is being used to legitimize prejudice and intolerance,” the letter reads. “Although we do not aim to make any political endorsements with this letter, we do express our unequivocal stance against the xenophobia, sexism, racism, and other forms of bigotry that you have actively and implicitly endorsed in your campaign.”

The letter claims that Trump’s campaign statements and views do not fit Wharton’s character of humility and diversity, though no specific examples are given. The signers reject Trump’s use of his Wharton education as “a platform for promoting prejudice and intolerance.”

“Your discriminatory statements are incompatible with the values that we are taught and teach at Wharton, and we express our unwavering commitment to an open and inclusive society,” the letter says.

The signers add that unlike Trump, they pride themselves in diversity and tolerance, which they contend offers a superior business model to what they hear from Trump.

“We are dedicated to promoting inclusion not only because diversity and tolerance have been repeatedly proven to be valuable assets to any organization’s performance, but also because we believe in mutual respect and human dignity as deeply held values,” the letter says. “Your insistence on exclusion and scapegoating would be bad for business and bad for the American economy. An intolerant America is a less productive, less innovative, and less competitive America.”

Trump reportedly has little support at his alma mater. No current faculty at the Wharton School have donated to his campaign, and the president of the University of Pennsylvania College Republicans says very few club members support the presumed Republican nominee.

The open letter features a form for members of the Wharton community to sign the letter, though outsiders can theoretically boost the numbers of signatories by identifying as a “Supporter”—a category encompassing family or friends of Wharton students, alumni, and staff.

The Wharton school has 5,000 undergraduate and graduate students, as well as over 90,000 alumni, according to its website, while the larger University of Pennsylvania has a 20,000+ student body.