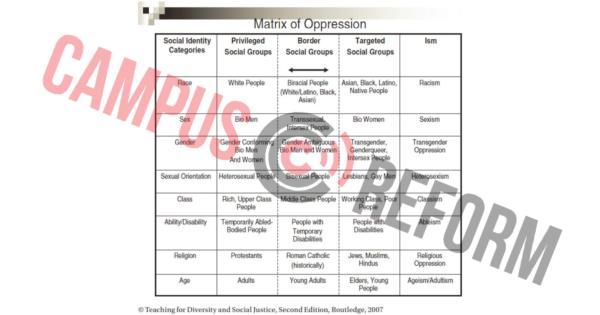 Incoming freshmen at Scripps College are apparently being taught that calling someone’s secondhand clothes “tacky” and news coverage of “highsociety” weddings are part of the “Cycle and Matrix of Oppression.”

The presentation, entitled “Power, Privilege, & Oppression,” was developed by Antoinette Myers, Interim Assistant Dean of Students and Director of the Multicultural Resource Center at Scripps, and Yuka Ogino, the Assistant Director of Scripps Communities of Resources and Empowerment (SCORE), a department that is “dedicated to enhancing and supporting inclusion...through programming and advising within a social justice framework.”

A slideshow outline of the presentation, which appears to be a pilot program targeting incoming first-year students, introduces participants to examples of “individual classism,” “institutional classism,” and “cultural classism” as a means of explicating the privileges and disadvantages encountered by individuals from different backgrounds.

“Institutional classism,” meanwhile, consists of actions like a hospital allowing a privately-insured patient to stay longer than a Medicaid recipient, their ailments being equivalent, because the former patient pays more.

“A newspaper runs pictures and a prominent article on a ‘highsociety’ [sic] wedding while not listing or highlighting a working-class couple’s wedding,” the Scripps presentation says, describing an instance of “cultural classism.”

Myers and Ogino instructed the participants to create a name tag with their pronouns. “Jordan Genderbread (she/her/hers, they/them/theirs)” was the given example.

Attendees of the presentation “will learn specific vocabulary,” become familiar with microaggressions, and “engage in meaningful conversations...in a brave space,” the outline states.

The lecture instructs participants to “share the air,” “be okay with silence,” “reserve the right to change your mind,” and “leave space for processing and after-processing, both inside and outside of the space (aka take care of yourself).”

Myers and Ogino next outline a matching game for attendees in which they have to match social justice terminology to respective definitions before instructing students about what gender is and is not. According to the presentation, gender is “a spectrum,” “a range of expression,” and “how you relate to yourself,” as opposed to a traditional male/female dichotomy or a distinction based on anatomy, sexual orientation, or chromosomes.

Another slide, entitled “Balancing Power,” employs sports imagery to make the case that "equality" is not the same as "equity" because equality does not account for existing privileges. 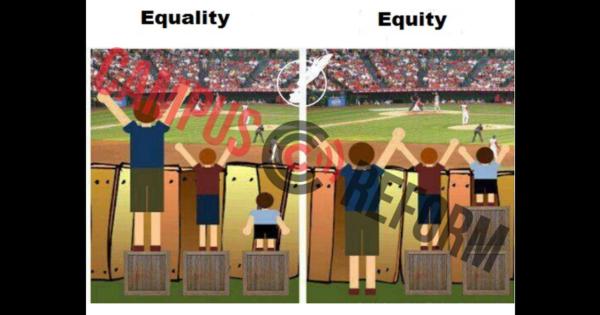 People get what they need

A “Matrix of Oppression” arranges groups inside social identity categories by their degree of oppression.

For sex, “bio men” (biological men) are considered “privileged,” intersex and transsexual individuals are considered to be “border,” or between privileged and oppressed, and biological women are “targeted.” The fifth column, in this case containing “sexism,” designates the term participants can use to identify instances of discrimination related to each particular social identity.

Another row, this one for age and the corresponding discrimination of “ageism/adultism,” labels adults as “privileged,” young adults as “border,” and elders and young people as “targeted.” “Intersex people” appears in the “border” category for sex, but the “targeted” category for gender.

The reasoning behind the classifications is not made clear in the slideshow, and neither of the facilitators responded to Campus Reform’s requests for clarification.

For example, white people fall under the “privileged” category but Asians are inserted in the “targeted” cell, despite the fact that Asian households outearn white ones in America.

The latter two terms are defined to show whites exclusively occupying the role of oppressors, with “internalized racism” being defined as feeling one’s “race or culture is bad or at least not as good as the White culture and race” and “institutional racism” consisting of “the laws and practices that institutions create in order to benefit White people at the expense of people of color.”

Another graph labeled “Cycle of Oppression” illustrates how stereotypes lead to prejudice, which causes discrimination, followed by institutionalization, and finally internalization.

Scripps gives an example of this cycle in action by suggesting that the stereotype that women do not excel at math and science leads employers to avoid hiring women for related jobs, leading to a disparity in which women only comprise 18 percent of college engineering students despite two-thirds of 4th grade girls reporting that they like math and science.

The presentation then distinguishes between three kinds of microaggressions—“microinsults,” “microassaults,” and “microinvalidations”—a system that is frequently used by microaggressions researchers to classify degrees of offense.

[RELATED: Law prof: microaggressions can be evidence of discrimination]

Campus Reform reached out to both Myers and Ogino, but neither had responded in time for publication.