Diversity dean gets a little too excited about diversity 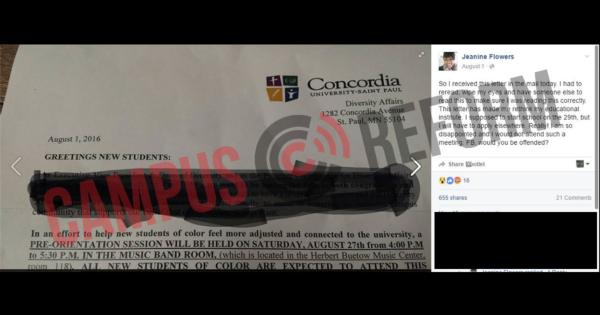 In a likely effort to promote the highest ideals of diversity and inclusion, one college administrator landed herself in hot water over what some are calling legitimate racial segregation.

Cheryl Chatman, Executive Vice President and Dean of Diversity Affairs at Concordia University, recently sent out a letter to the incoming freshmen class containing a special summons for “students of color” to attend a special meeting in advance of the normal freshman orientation.

“This letter has made me rethink my educational institute...I think I will have to apply elsewhere.”

“In an effort to help new students of color feel more adjusted and connected to the university, a pre-orientation session will be held on Saturday, August 27th from 4:00 P.M. to 5:30 P.M. in the music band room,” she writes. “All new students of color are expected to attend this meeting” (emphasis in original).

Chatman then goes on to elaborate that the purpose of the meeting is to introduce incoming students of color to the various resources and student organizations that are available “to ensure your involvement, satisfaction, and success during your years at [Concordia].”

The letter angered one incoming student, Jeanine Flowers, who posted it to Facebook saying the missive “has made me rethink my educational institute. I’m supposed to start on the 29th, but I think I will have to apply elsewhere.”

Since then, the post has amassed hundreds of shares, with many commenters expressing similar outrage.

In a subsequent post, made after a meeting with Chatman to discuss the issue, Flowers relates Chatman’s explanation that it was not her “intent” to “segregate or isolate ‘people of color,’” but rejects the excuse, saying, “that’s exactly what that letter did.”

To defend herself, Chatman issued a second letter Thursday explaining that the university simply sends the letter every year “in the hopes of getting students to attend something that may change their entire college experience.

“Clearly our excitement to ensure that our students realized the importance of this meeting may have been interpreted as required or mandatory instead of warm and welcoming,” she admitted, but promised that “We can adjust this for the future.”