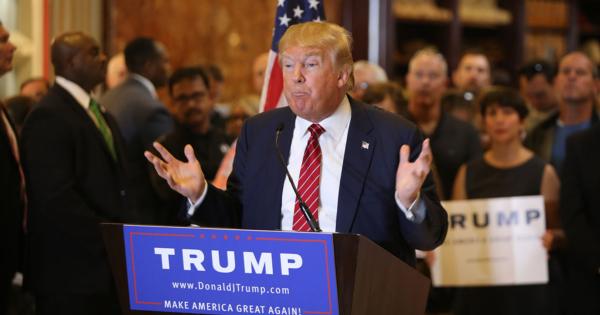 A law professor at Drexel University called Donald Trump’s reference to “Second Amendment people” a form of terrorism, comparing it to violence against abortion providers by “Christianist Republicans.”

David S. Cohen, who teaches a mandatory Constitutional Law class for students acquiring a J.D. at Drexel’s Thomas R. Kline School of Law, writes in an op-ed for Rolling Stone Tuesday that Trump’s comment implying that Second Amendment supporters could do more than vote to prevent Hillary Clinton from picking Supreme Court justices was a form of terrorism.

“What Trump has done is clear: He has incited violence against Hillary Clinton and/or her judges.”

Trump, speaking in Wilmington, North Carolina on Tuesday, was discussing the potential for a court hand-picked by Clinton to undermine Second Amendment rights.

“If she gets to pick her judges, nothing you can do folks,” Trump said to the packed baseball stadium. “Although the Second Amendment people—maybe there is, I don’t know.”

Immediately following this statement, many media outlets capitalized on the outrage, expressing fears that Trump’s statement could incite violence.

Evidently, Cohen agrees with that assessment, asserting that Trump’s brief statement is “his most outrageous—and dangerous—ad-lib yet.”

Cohen dubbed it “stochastic terrorism,” which is described by a website dedicated to the topic as an obscure and non-legal term that means using language and other forms of communications to incite random actors to carry out violent terrorist acts that are statistically predictable but individually unpredictable.

Based on this theory, Cohen says it is possible to predict that a possible unknown lone wolf might hear Trump’s call and take action in the future, placing Clinton or her judicial appointees’ lives at risk.

“Though most of the people hearing that call may claim he was joking, given what we know about people taking up arms in this country, there will undoubtedly be some people who think he was serious and consider the possibility,” Cohen writes.

Cohen, who currently serves on the board of directors for the Women’s Law Project and the national Abortion Care Network, quickly moves on to the subject of abortion, saying that this form of terrorism is comparable to the Planned Parenthood shootings in Colorado Springs last November, referencing a blog post blaming “Christianist Republicans” for the shooting that left three dead and nine wounded.

“Was the shooting exactly what conservative Christian presidential candidates and members of congress wanted? Maybe, maybe not,” Valerie Tarico writes in the post. “But is it what they asked for. Republican members of the Religious Right incited violence as predictable as if they had issued a call for Christian abortion foes to take up arms.”

According to Cohen, that explanation for the Planned Parenthood shooting also helps to explain Trump’s campaign against Clinton. By calling Clinton “Crooked Hillary,” repeating that Clinton is a criminal who needs to be locked up, and now using “violence metaphors”—such as his statement in Wilmington—against her, Cohen argues, Trump is essentially making an explicit call to arms.

Cohen has reacted with similar outrage toward conservatives in many occasions, including the Orlando nightclub shooting in which Omar Mateen, who swore allegiance to ISIS, killed 49 people and wounded 53 others in what was later officially called a terrorist attack.

Cohen’s solution was to call for the immediate repeal the Second Amendment, which he deemed “outdated” as well as a “threat to liberty, and a suicide pact.”

Cohen is the co-author of a book titled “Living in the Crosshairs: The Untold Stories of Anti-Abortion Terrorism,” and once claimed that “extremists want the complete abolition of abortion” during a 2015 interview with MSNBC.

“In the world I’m most familiar with, the world of anti-abortion violence, we see this again and again from leaders of the anti-abortion movement,” Cohen alleges in reference to Trump’s statement.

National Right to Life estimates that, since Roe v. Wade and Doe. v Bolton were adjudicated 43 years ago, more than 58 million unborn children have lost their lives to abortion.

“What Trump has done is clear: He has incited violence against Hillary Clinton and/or her judges, even if he doesn’t know exactly who will carry that violence out,” Cohen concludes.