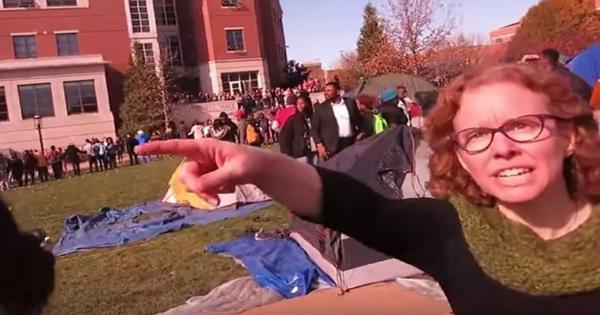 Gonzaga University has brought embattled ex-Mizzou professor Melissa Click on board to serve on its faculty despite her assault against a student journalist last fall.

Gonzaga announced its decision late Friday, saying that after a national search Click “emerged as the top candidate based on her record of teaching.”

“We are confident she has learned much from her experiences at the University of Missouri.”

“The committee was unanimous in deciding that she would be one of the two people to whom we offered the job,” said Gonzaga’s Communications Studies Department chair, Jonathan Rossing, under whom Click will serve as a lecturer in a one-year, non-tenure-track position.

Click was suspended in January and subsequently fired for her involvement in a string of protests on Mizzou’s campus last fall, which sent the school into the national spotlight and resulted in a year of racial unrest.

During one protest, Click was caught on camera assaulting a student journalist sent to campus to film the protests, even calling for “some muscle” to forcibly remove him from the grounds.

After Click had already fallen under strict scrutiny from the school for that incident, a video of her berating a police officer at an earlier protest surfaced online and ultimately sent her packing.

Click, though, continued to fight for her job by appealing her termination (an appeal that was rejected) and conducting several interviews with the media, during some of which she blamed her firing on white men who are mad at “women who speak up.”

Due to the protests Click was involved in, Mizzou is now struggling to dig itself out a financial hole and is facing an enrollment drop worse than administrators had feared.

But now, Gonzaga has deemed Click one of the “most qualified and experienced” candidates for a job in the communications department, where she will train student journalists like the one she assaulted in the fall.

“Dr. Click has excellent recommendations for both her teaching and scholarship, which includes an extensive record of publication,” Dean of the College of Arts and Sciences Elisabeth Mermann-Jozwiak said in a statement. “We are confident she has learned much from her experiences at the University of Missouri and believe she will uphold the rigorous standards of academic excellence demanded of Gonzaga faculty and students.”

Click declined to comment on whether or not she will pursue legal action against Mizzou, referring reporters to a statement she made Friday afternoon in which she says she’s “interested in looking forward, not back.”