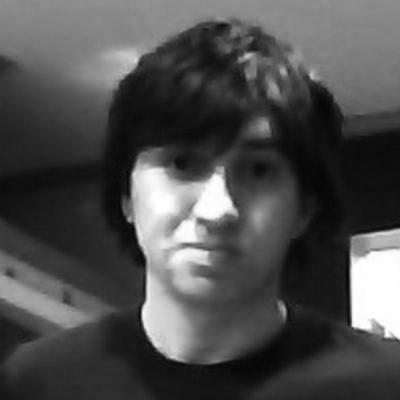 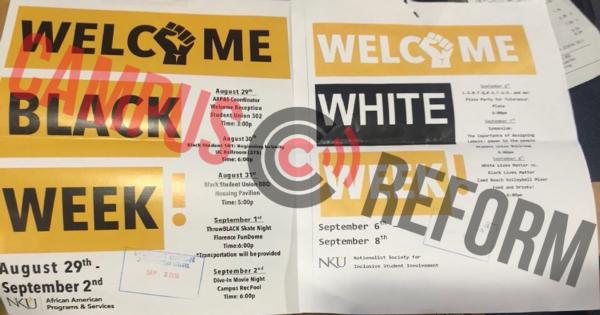 Students and administrators at Northern Kentucky University recently participated in a hand-holding demonstration to protest "Welcome White Week" fliers that were posted around campus.

According to The Northerner, the controversial and unauthorized fliers were posted in response to “Welcome Black Week,” a series of events that took place from August 29–September 2 with the purpose of introducing freshmen to groups and programs that center on the Black Lives Matter movement on campus.

“The ignorance that stands on NKU’s campus is no longer acceptable. It’s starting to become deliberate.”

The mock flier mentioned several events, such as "White Lives Matter vs. Black Lives Matter," a "Pizza Party for Tolerance" and "L.G.B.T.Q.R.S.T.U.V. and You," all of which are apparent attempts to satirize the “Welcome Black Week” events.

Students, faculty members, and even university president Geoffrey Mearns all gathered Tuesday to protest the flier, which they described as a direct affront to black students on campus.

“The ignorance that stands on NKU’s campus is no longer acceptable. It’s starting to become deliberate. Just like this person who deliberately copied our flyer,” complained James Johnson, a student organizer for the demonstration.

“We worked hard for Welcome Black Week in response to the lack of representation in the universal programs within Welcome Week,” he added. “It’s like a cause and effect. So the reason they did this was because we had Welcome Black Week.”

Several African American students who were in attendance also shared their own experiences of alienation at NKU, such as being the only black student in a classroom, having trouble finding study partners for chemistry, and having a general feeling of being left out.

“You know what the answer is to this right? You know how you defeat ignorance is through knowledge,” Mearns told the assembly reassuringly. “You defeat despair and cynicism with faith and hope. You defeat darkness with light and overall you defeat hate with love. I’m thankful for the spirit of the conversation, and the way you’ve responded because you exemplify those traits and that’s why we know we’ll win… I’m glad to be with you.”

As documented by Northerner editor-in-chief Abby Anstead on Twitter, the protesters also formed a circle at one point and held hands, chanting “We will not be guided by fear or defeat...We will avoid the pitfalls...And we will beat the odds that are against us.” 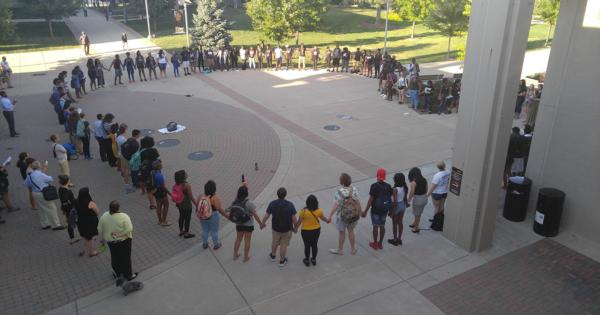 Mearns told the student activists that NKU is currently investigating the source of the fliers, but did not specify whether any disciplinary actions are being considered.

Christian Montoya is a Texas Campus Correspondent, and reports liberal bias and abuse on campus for Campus Reform. He received an associate degree in journalism and currently attends Austin Community College, studying Economics.