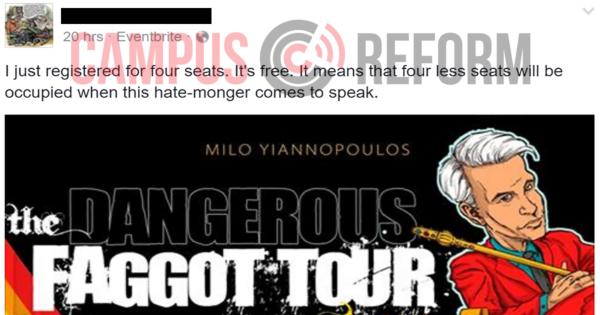 Students at Louisiana State University snatched up tickets to an upcoming Milo Yiannopoulos event in hopes of disrupting the conservative provocateur, but failed to realize that the event page was a sham.

LSU students had already planned a response to Milo’s upcoming visit on September 21, creating Facebook groups to “Organize, Reflect, Act,” including an organizational meeting on Sept. 19 and a rally on the day of the event.

“These protestors are not going to affect the event at all.”

“We can’t sit back and let Yiannopoulos chart a vision for our campus that doesn’t value and protect everyone,” states the event description for the rally, which also boasts a trigger warning. “It is our responsibility to come together and fix the problems of the place we call home.”

Some students went a step further, however, and boasted that they had each reserved four tickets, the maximum number allowed per person, in order to boycott the event, presumably leaving those seats empty.

“I just registered for four seats. It’s free,” one post read. “It means that four less [sic] seats will be occupied when this hate-monger comes to speak.”

“Tickets are free, and you can register for up to 4,” a more elaborate post declared. “I suggest you do so, and then either don’t show or—better yet—show up and then walk out as the show is starting.” 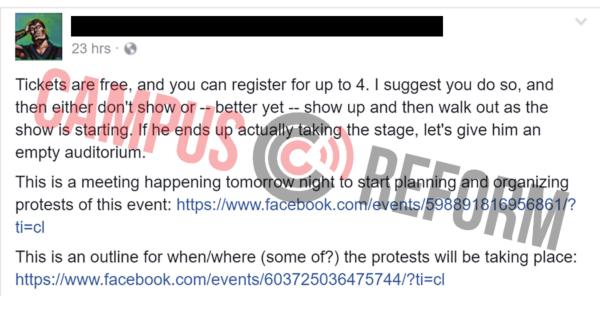 University of North Carolina students planned a similar walkout against a Ben Shapiro lecture in March, although the plan backfired when students eager to hear the lecture filed in to fill the vacated seats.

One LSU student even said she had “used several different email addresses,” which would allow her to claim more than the maximum four tickets.

“You can register up to four tickets for free.” the student declared on Facebook. “I used several different email addresses to do so. Let’s leave this guy with an empty auditorium.” 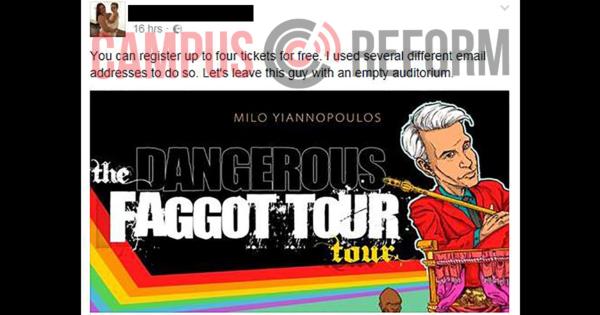 What the students haven’t realized however, is that the Eventbrite page for “Milo Yiannopolous at Louisiana State University” is a dummy registration page meant to dupe the protesters into receiving fake tickets.

Rather, LSU Students for Trump, which is hosting the event, told Campus Reform that all registration will be officially handled through the university.

“We have people coming from across the state for this event,” said Students for Trump campus ambassador David Walters. “These protestors are not going to affect the event at all.”

According to the protest page, Milo, a gay man, is using his “Dangerous Faggot” tour as an “attack on LGBTQ people.”

“Yiannopoulos envisions a society which oppresses anyone who isn't a straight, white man,” the description contends. “We prefer a society that values and protects the lives and contributions of all Louisianians. We find strength in our diversity, traditions, and spiritual beliefs.”

The eventbrite page shows that the faux event tickets are sold-out.