Cornell students to decide whether to '#FreetheTampon' 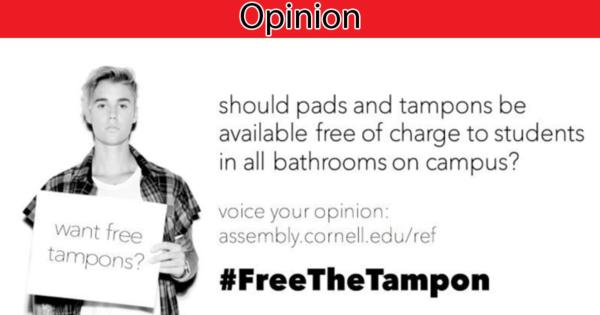 Free tampons may be on the way to all bathrooms on Cornell University’s campus—men’s included.

Over 2,300 people signed a petition sponsored by Student Assembly President Jordan Berger to provide pads and tampons free of charge in all Cornell bathrooms. Having received more than 10 percent of the undergraduate student body’s signatures, the entire student body has the opportunity to vote on the measure on the campus-wide Student Assembly ballot.

“Should pads and tampons be available free of charge to students in all bathrooms on campus?”

The referendum reads: “Should pads and tampons be available free of charge to students in all bathrooms on campus?”

The movement, also known as “Free the Tampon,” has garnered significant support beyond Cornell. Brown University, for instance, now stocks feminine hygiene products in bathrooms for both genders.

At both Brown and Cornell, students in support of “freeing the tampon” are adamant that these products should be freely available because they are “as necessary as toilet paper,” and because “not all people who menstruate are women.”

The cost of feminine products per person per month is roughly $7. At Cornell, there are over 14,000 undergraduates, 5,000 graduate students, and 2,300 professional staff according to the university website. Keeping every bathroom on campus stocked with enough tampons and pads for only half of this population could cost hundreds of thousands of dollars annually.

There is also the issue of students, even those with more than enough means to self-provide, taking extra tampons and pads if they are freely, indefinitely available. Tampons and pads are much more easily taken and stuffed away in a bag than, say, toilet paper or hand soap.

Tampons and pads are not “necessary.” While they are the menstrual product of choice for most women, there are other reusable options that are far less expensive. A menstrual cup, for example, costs around $35 and can last ten years.

It’s worth noting that this money would only benefit half of the population. Since when does responsibility for providing women’s toiletry items fall unto men as well? This goes directly against the idea of women being self-sufficient in the modern age—something women have fought to achieve for decades.

And, because it clearly needs to be said: biology is unfair, and there are some things that women need that men don’t and vice versa.

There are alternatives that can provide easy access to menstrual products without superfluously spending thousands of dollars. Many public restrooms nationwide offer dispensers with tampons and pads for 25 cents, machines that Cornell already has in some bathrooms on campus. Installing these in more Cornell bathrooms would be a much more affordable option that would provide students with a solution to an emergency need.

For those students struggling to afford feminine hygiene products, perhaps the Student Assembly could work with Gannett to sponsor a more monitored system where students in need could go for tampons, pads, or the more cost-effective menstrual cup.

At Cornell, there never seems to be a lack of complaining about tuition hikes or other campus costs each year while at the same time a consistent demand for more free stuff. It’s time to realize we just can’t have it both ways.