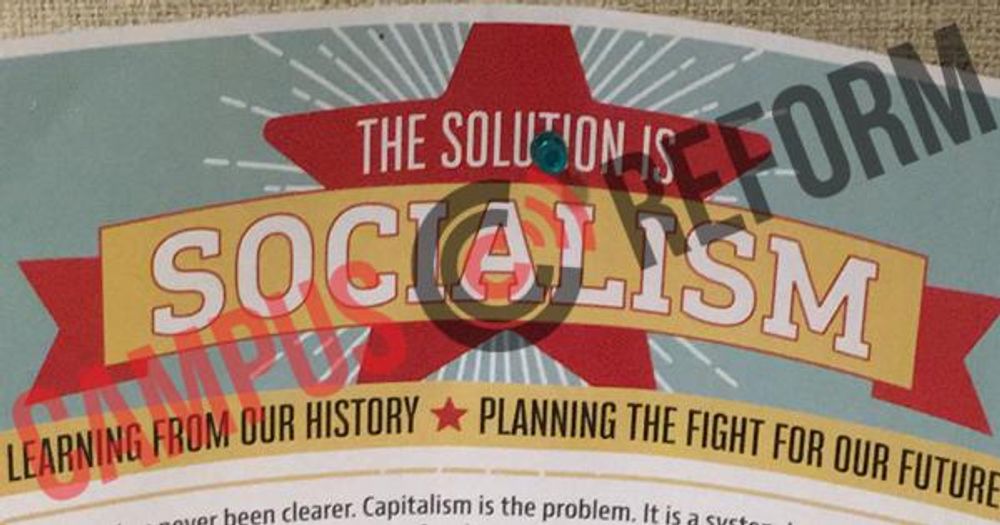 Central Connecticut State University will be hosting an all-day event on the evils of capitalism and the benefits of a socialist alternative, explicitly claiming that “capitalism is the problem” with society.

The event, called “The Solution is Socialism,” describes itself as an “educational conference organized around the conviction that we can build an eco-socialist future managed and enriched by working class democracy, creativity, and solidarity.”

“It has never been clearer. Capitalism is the problem,” asserts a flyer advertising the event that was obtained by Campus Reform. “It is a system built on inequality and exploitation, poverty for the vast majority of the world’s people, racism, sexism, homophobia, and the destruction of the planet’s life-sustaining natural system.”

The nine-hour event will feature several guest speakers addressing a range of topics, including “Revolutionary Socialist Strategy,” the criminal justice system as a “profit-making agent,” and “The Movement for Black Lives Today.”

Notably, Jeff Mackler, who is the Socialist Action presidential candidate, will be making a special appearance alongside a member of the Socialist Workers Party in Argentina.

The conference is sponsored by Central Connecticut’s “Youth for Socialist Action” club, a self-proclaimed “group of revolutionary minded students and young workers” who share a common goal of “the creation of a society that puts human needs before the profits of the ultra-wealthy.”

Janice Palmer, Central Connecticut’s media relations officer, explained to Campus Reform that all student clubs at the public institution are “funded by the university through our Student Government Association,” noting that the Youth for Socialist Action club will likely “spend its fund for speakers’ appearance fees.”

Although the event will be held at Central Connecticut, a student told Campus Reform that several posters for the conference were also found on Eastern Connecticut State University’s campus, which is just a short drive away.

ECSU declined to comment on the matter, denying any knowledge of the flyers or involvement in the event.