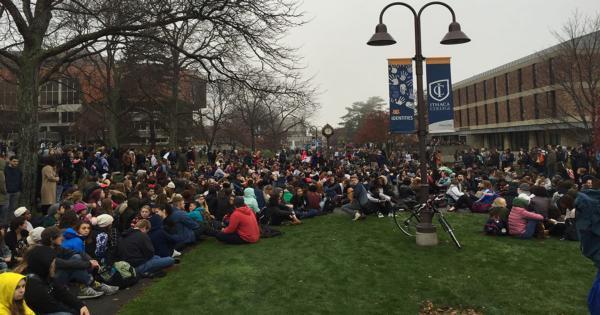 The Ithaca College student newspaper wants students to avoid “racial insensitivity” this Halloween, lest their “cultural appropriation” force another round of raucous protests.

In an editorial Wednesday, The Ithacan cajoles students to steer clear of “the insensitive adoption or use of elements of one culture by another culture,” saying such costumes “are yet another symptom of the environment of racism and oppression that continues to permeate society.”

“Boiling down an entire culture into a costume is racially insensitive.”

Hence, while conceding that “it seems perfectly innocuous” at first, “sporting tribal makeup and a headdress, wearing a sombrero and a fake mustache, dressing up in baggy clothes, and painting your face black” are all examples of “racist and insensitive appropriations of another person’s culture.”

Costumes based on cultural stereotypes are particularly problematic, the editors add.

“Boiling down an entire culture into a costume is racially insensitive and only further contributes to the marginalization of these groups,” the editorial argues. “It says that these people are these stereotypes, as if every person of a certain race dresses a certain way and acts a certain way.”

The reason for the editorial board’s insistence on the matter traces back to a controversial “preps and crooks”-themed party that was advertised (but never actually held) by an unaffiliated fraternity last October, prompting a wave of student protests and a student government no-confidence vote in then-President Tom Rochon, who eventually resigned under pressure.

[RELATED: Ithaca College president gets ‘no confidence’ vote over response to frat party]

Following the censure of Rochon, about 1,000 students participated in a walkout, gathering on campus to agitate for Rochon’s dismissal based on a belief that his administration had not responded to their grievances with sufficient sympathy.

Although he initially defended himself, after several months of escalating tension Rochon eventually agreed in January to step down from his position at the end of the current school year, though student activists indicated at the time that they would continue protesting until they had also taken down the Board of Trustees.

This year, in an apparent bid to head off such reactions, The Ithacan suggests that students avoid anything remotely likely to provoke the more volatile elements of the student body.

“Objects like Native American headdresses and jewelry are sacred to indigenous cultures, imbued with depth and meaning that are often lost on those who decide to mimic these styles,” the paper states, contending that “in the fight to combat systemic racism, having people become cognizant of the destructive nature of culturally appropriative costumes would be a small step in the right direction.”