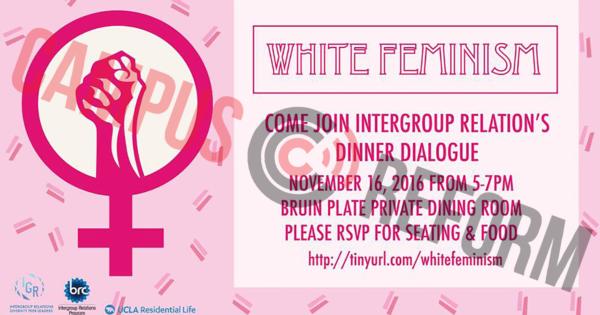 University of California, Los Angeles students were treated to a dinner dialogue this month on the topic of “white feminism” and its relation to white supremacy.

The "White Feminism" dinner dialogue was hosted by the campus Intergroup Relations Program, an administrative center that seeks to educate the UCLA community on issues of “social identity, interpersonal, and intergroup relations/conflict, prejudice reduction, and social justice.”

“As a woman of color I was curious to know what ‘white feminism’ really was.”

Celia Cody-Carrese, an Intergroup Relations Center intern who helped put on the event, told The Daily Bruin that organizers chose white feminism as their topic because they think feminism has traditional ties with white supremacy, noting that the term “feminism” is most frequently applied to white women, while the concerns of black women are generally treated as a separate, racial issue.

Mitali Gupta, a UCLA Senior who attended the event, told Campus Reform that feminism’s link to white supremacy was indeed discussed during the meeting, adding that she agrees that such a connection exists.

“As a woman of color I was curious to know what ‘white feminism’ really was,” Gupta explained.

Other topics discussed during the dinner dialogue included European patriarchy, subjugation during the colonial era, and intersectional feminism.

Anna Yeakly, the director of the Intergroup Relations Center, said in a statement to Campus Reform that the dinner dialogue program is in its 5th year, and that the program is a partnership between various administrative offices on campus.

“White feminism was a topic suggested by the students, based on their interest in discussing the issue of intersectionality that is often left out of conversations about feminism” Yeakly said.

According to the Center’s website, recent dinner dialogues have focused on issues such as the “Intersections of Social Media, Culture, and Social Justice Issues” and “Race and Police Enforcement.”