Campus Reform | VIDEO: The most outrageous liberal student interviews of 2016

VIDEO: The most outrageous liberal student interviews of 2016

Throughout 2016, Campus Reform sent reporters to various college campuses to gauge millennial sentiment on Hillary Clinton’s scandals, banning Christmas decorations, and everything in between. 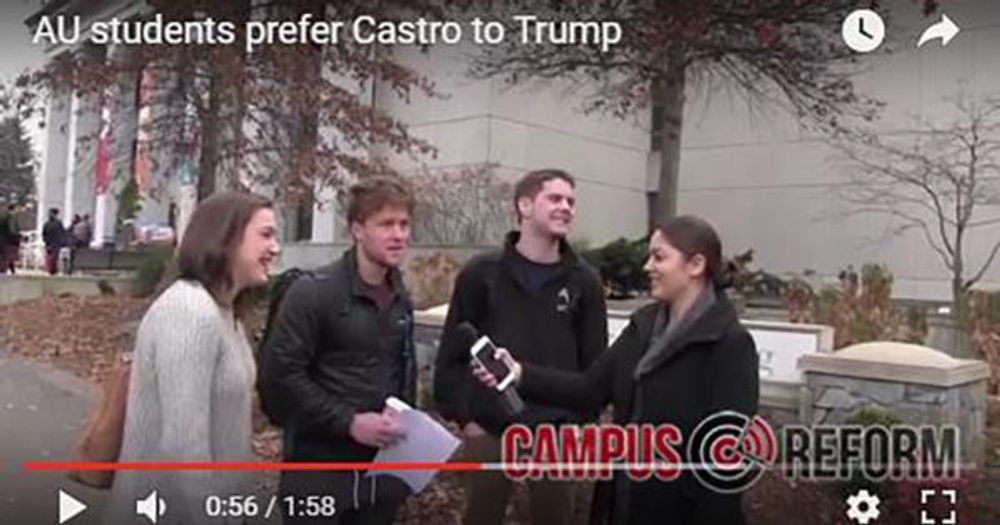 Throughout 2016, Campus Reform sent reporters to various college campuses to gauge millennial sentiment on Hillary Clinton’s scandals, banning Christmas decorations, and everything in between.

The results were hilarious, but also indicative of a number of campus trends, like hyper-PC culture and liberal indoctrination. For example, students interviewed at American University overwhelmingly said that they viewed Fidel Castro, a murderous dictator, more favorably than President-Elect Donald Trump.

To celebrate the end of 2016, Campus Reform compiled a list of the best interviews conducted on campus.

One of the biggest problems facing Hillary Clinton during the election was her apparent inability to gain the trust of voters, an issue exploited by the Trump campaign.

Campus Reform hit the streets to see if young voters were aware of some of Clinton’s scandals and insensitive quotes, and if awareness of those issues made them less likely to vote for her.

Students overwhelmingly attributed the scandals and racist jokes to Donald Trump, and were shocked when they found out Clinton was actually the one responsible for those incidents, such as claiming a 12-year-old rape survivor “fantasized about older men.

After the death of Cuban communist revolutionary Fidel Castro, statements from political leaders varied in their assessment of his legacy. President-Elect Trump referred to Castro as a “brutal dictator,” while Canadian Prime Minister Justin Trudeau painted a more positive image of the deceased leader, calling him a “friend.”

To gauge millennial sentiment on Castro, Campus Reform visited American University and asked whom students had a more favorable opinion of—Castro, who was responsible for close to 100,000 Cuban deaths, or President-Elect Trump.

Shockingly, nearly every student we talked to preferred the murderous Castro to the non-PC Trump.

3. Hillary supporters can’t name an accomplishment of hers

In light of a poll that found young people overwhelmingly viewed Hillary Clinton as a better role model than Donald Trump, Campus Reform talked to Hillary supporters on campus about what makes her a good role model.

The students returned the questions with awkward pauses and directions to turn off the camera as supporters struggled to name just a single accomplishment that qualified Hillary to be a role model.

4. Sanctuary campus supporters want to ignore other laws too

Colleges across the country have embraced the “sanctuary campus” movement, providing refuge for illegal immigrants from federal immigration officials. Campus Reform interviewed fans of the sanctuary campus movement to see if they were also willing to ignore other federal laws or school rules.

Not surprisingly, the sanctuary supporters were also on board for campus bans on parking tickets, underage drinking laws, student loan laws, and final exams.

5. Towson students react to the election

Nonetheless, walkout participants claimed their movement was inclusive and not meant to shame anyone.

Perhaps the most humorous results of the interviews were students reacting to the results of the election—they claimed they cried themselves to sleep, had panic attacks, and “bought mace for the first time.”

Christmas on campus has been curbed by a number of universities banning Christmas decorations, the colors red and green, and even the word “holiday.”

Would students be willing to ban Christmas? Campus Reform traveled to the University of Virginia and created a fake student group, “Students for an Inclusive Holiday Season,” to see if students would sign a petition banning Christmas from campus.

In less than two hours, Campus Reform gathered 20 signatures and got students to agree that Christmas is “triggering” and “oppressive” for non-Christian students.

7. Obama supporters unsure why they love him

To celebrate the Thanksgiving holiday, Campus Reform, carrying a “Thanks, Obama” card, talked to Obama supporters at the University of Maryland to find out why they were thankful for his presidency.

Obama fans were unable to name or defend any policy achievements, such as the Affordable Care Act, which one student said she didn’t fully understand because “my mom pays my insurance.”

Another student applauded Obama’s efforts to unify the country, but said he wasn’t sure if he would consider the U.S. to be more unified than it was eight years ago.

Campus Reform interviewed millennials at a Hillary Clinton rally and found they had a near-unanimous distaste for gun rights in America, with some even willing to repeal the Second Amendment.

Clinton supporters justified this position by claiming that the Constitution is outdated and that gun rights are incompatible with human rights.

“Yeah, totally; I mean it’s kind of ridiculous to me that, yeah, the Constitution is great and everything, but you have to remember that people made these, humans make mistakes and it was written hundreds of years ago,” one millennial said.

Another said succinctly, “I hate the NRA.”