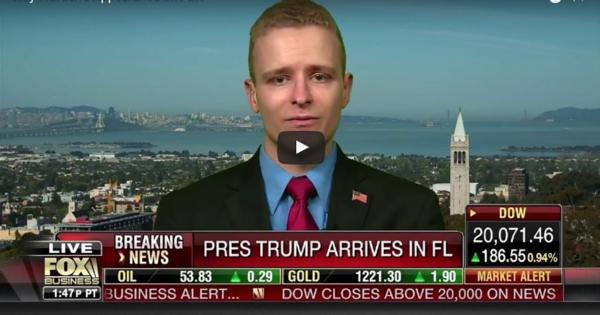 Campus Correspondent Troy Worden made the rounds late last week, explaining what it’s like to be a young conservative on a campus as progressive as UC-Berkeley.

“It’s extremely contentious to be a Republican on campus…people spit at us, people call us names. We have multiple members who’ve been punched in the face,” Worden told Fox Business anchor Melissa Francis.

“I want to commend you for...having the guts to take this on, on campus. It’s not easy to do what you’re doing”

He explained that though the Berkeley College Republicans have over 1,000 people on their email list, only about 50 can be expected to show up to any given event.

Worden didn’t mince words when it came to his leftist fellow UC Berkeley students, either, arguing that they supported the tactics of the anarchist rioters.

“The students at UC Berkeley, a good majority, actually support their tactics,” Worden said, noting shortly thereafter that students were dancing “as the campus burned.”

“I didn’t see students rallying together and saying, ‘this doesn’t represent us.’ They were encouraging the outside groups who were causing all this mayhem and destruction,” he said.

Worden also put in an appearance on Hannity, where he blasted the leftist tendency to refer to provocateurs Milo Yiannopoulos, who he’d invited to speak at Berkeley, and comedian Gavin McInnes, who saw protests over his appearance at New York University.

“I can say for certain [McInnes] is not a white supremacist or a Nazi. And the same goes for [Yiannopoulos]. These people are expressing their views in a controversial manner and with humor,” Worden said.

“I want my peers to protest, sure, but I also want them to address the facts and statistics Mr. Yiannopoulos and Mr. McInness bring to the table. I want them to engage in a rational debate, not to shout us down and use violence to silence us. I don’t think Berkeley is the home of the Free Speech Movement anymore.”

Troy even made a radio appearance with Laura Ingraham, where the famed host complimented him for his backbone.

“I want to commend you for standing up and having the guts to take this on on campus. It’s not easy to do what you’re doing,” Ingraham said. “And I would say there are a lot more students than you know who support you.”

Ingraham theorized that many students wanted to keep their heads down and graduate.

“I think you’re really acting as a good example for other students across the country,” she said.