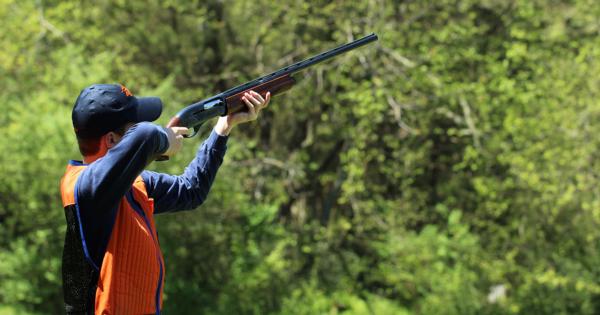 A member of the University of Central Florida “Knights for Socialism” found it ironic that the College Republicans would criticize a “Leftist Fight Club” while hosting a trap-shooting event.

“Lol you guys talk trash about the socialist self defense class for advocating violence but you set up an event for GUNS,” posted Kevin Kordupel, a member of the socialist student group. “Yeah, nice logic there, hypocrites.”

“Conservatives, [R]epublicans, and righties are snowflakes just like liberals are.”

UCF College Republican chair Karis Lockhart quickly replied, pointing out that the CR event does not limit participation on the basis of political affiliation.

“Hey Kevin! Hosting an open to the public, trap shoot fundraiser to support our members trip to a political conference is far different from the Knights for Socialism hosting ‘Leftist Fight Club: The Rumble at Lake Claire’ which specifically notes that Republicans are not welcomed to attend. Have a great evening.” 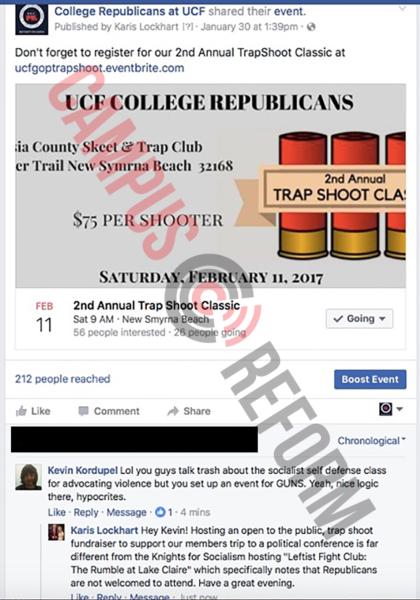 Seemingly irked by Lockhart’s cordiality, Kordupel proceeds to contend that “shooting guns at walls” is little different from learning hand-to-hand combat techniques for use against political opponents, even asserting that the CR criticism of the “Leftist Fight Club” proves that conservatives are as much “snowflakes” as their liberal peers.

“Our event is for the community in order for many of them to learn self-defense. Your event is for just shooting guns at walls to inflate your hollowed egos with a political conference,” Kordupel begins, remarking that the socialist event was “a joke” and that the CRs “might as well [have] talked trash about an onion article,” which “only proves that conservatives, [R]epublicans, and righties are snowflakes just like liberals are.”

The Knights for Socialism expressed a similar sentiment in a post on its Facebook page, facetiously thanking the CRs for “all of the generous advertising and free publicity that they’ve provided us,” crowing that “you even put us in the national spotlight.” 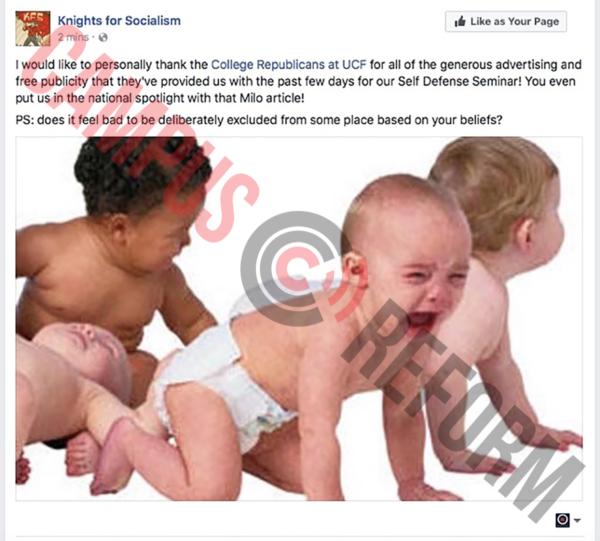 Kordupel concludes by chastising Lockhart for wishing him a “great evening” in his original reply, saying, “Please don’t try to be the better person by saying ‘Have a great meaning [sic]’ because we all know your [sic] actually saying ‘go to hell you annoying commie!”

Lockhart responds patiently, clarifying Kordupel’s evident misunderstanding of the sport of trapshooting and highlighting the difference between shooting a clay disk and training to fight one’s classmates.

“Bless your heart, let me educate you real quick,” she begins. “Trap shooting is an outdoor sport where shooters shoot a clay bird with a shotgun as it is launched out of a machine into the air. So don't worry, no walls will be harmed in the making of this fundraiser.” 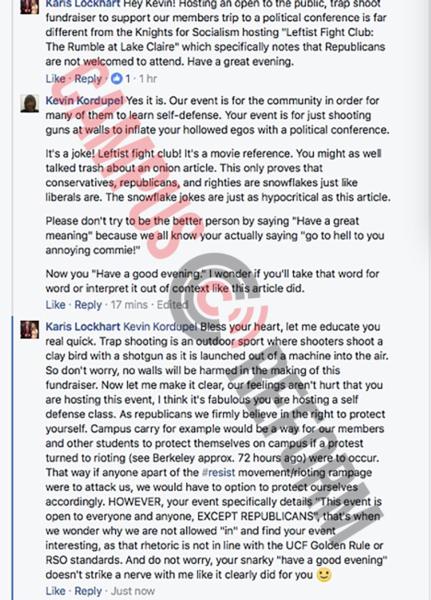 Lockhart then observes that, as a matter of fact, she has absolutely no objection to the socialists’ self-defense class.

“Now let me make it clear, our feelings aren't hurt that you are hosting this event; I think it's fabulous you are hosting a self defense class,” she says. “As [R]epublicans we firmly believe in the right to protect yourself. Campus carry for example would be a way for our members and other students to protect themselves on campus if a protest turned to rioting (see Berkeley approx. 72 hours ago) were to occur. That way if anyone apart of the #resist movement/rioting rampage were to attack us, we would have the option to protect ourselves accordingly.”

“HOWEVER, your event specifically details ‘This event is open to everyone and anyone, EXCEPT REPUBLICANS,’ that's when we wonder why we are not allowed ‘in’ and find your event interesting, as that rhetoric is not in line with the UCF Golden Rule or RSO standards,” Lockhart concludes. “And do not worry, your snarky ‘have a good evening’ doesn't strike a nerve with me like it clearly did for you.”

Lockhart told Campus Reform that she felt compelled to respond to Kordupel on behalf of all conservatives at UCF.

“As Chairman of the organization, I felt the need to stand up for our fundraiser and fellow Republicans on campus,” she explained. “Once Kevin K. commented on the post about us ‘shooting at walls’ I knew I had found another left wing so-called activist who prefers to run his mouth about nonsense instead of understanding the facts at hand. This was just another day in the life of being an active conservative on a college campus.”

Neither the Knights for Socialism nor Kevin Kordupel responded to repeated requests for comment.