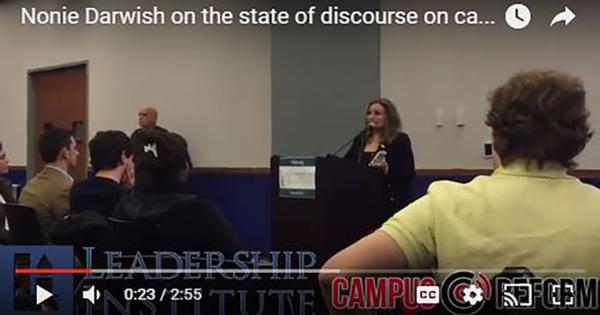 Georgetown University students are outraged that a Muslim woman was allowed to deliver a speech criticizing Sharia law Tuesday, calling it “Islamophobic” and “hate speech.”

Nonie Darwish, who grew up in Egypt as a Muslim and later fled for the U.S. and Christianity, was invited to speak to the Georgetown University College Republicans (GUCR) group about her latest book, Wholly Different: Why I Chose Biblical Values Over Islamic Values, at an event co-sponsored by the Clare Booth Luce Policy Institute.

Some students, however, denounced the invitation of the “Islamophobic” Darwish, expressing displeasure through an op-ed in the school newspaper, alternative events being organized to coincide with the lecture, and even the resignation of one member of the CR executive board.

Several days before the event, The Georgetown Voice published a piece by undergraduate student Aly Panjwani claiming that by inviting Darwish, the GUCR board gave a platform to “hateful and violent views.”

The op-ed also criticized The Georgetown Review’s invitation of Asra Nomani, a Muslim woman and former Georgetown professor who has been repeatedly harassed by a former colleague for voting for Donald Trump.

“My critique of these speakers is not an effort to silence free speech,” Panjwani paradoxically claimed, explaining that “these speakers are not exercising free speech, they are exercising hate speech, a speech of the kind that no organization, especially at Georgetown, should endorse or give a platform to.”

Shortly thereafter, the GUCR board allegedly received dozens of email complaints from the Muslim Student Association and other Georgetown community members, ultimately driving the group’s Freshman Representative to resign from the board.

Javon Price wrote in a Facebook post that he was resigning from the board because he feels there is a “clear distinction between free speech and hate speech” that is being ignored by the invitation of Darwish.

“I for one, reject and condemn any organization that hides behind the righteous principles of free speech,” Price declared. “I implore the College Republicans to cancel this event. If not, we not only choose to ignore the voices of our fellow Hoyas, but to maliciously offend them and their beliefs.” 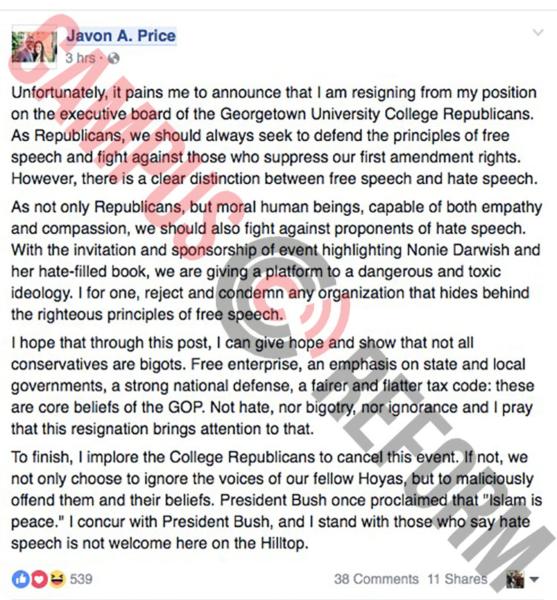 The Georgetown University College Democrats applauded Price’s resignation in a separate Facebook post, writing that “hate...is unworthy of the noble privilege of free speech,” and declaring that “Islamophobia and bigotry will not be tolerated in any form on Georgetown’s campus, especially not under the guise of conservatism.” 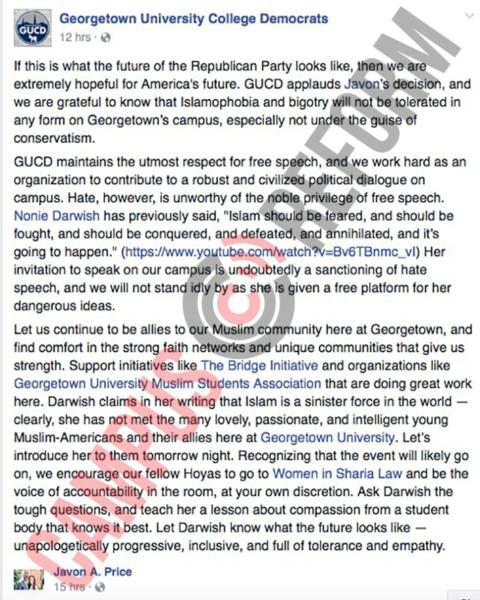 Riding the wave of disapproval for the Darwish and Nomani events, alternative events taking place at the same time were organized by The Bridge Initiative, a Georgetown research project on Islamophobia.

Attendees of the Darwish event Tuesday night were approached by students with flyers promoting The Bridge Initiative’s “Muslim Responses to Islamophobia” event, along with a full-page handout calling attention to Darwish’s “Islamophobic” views. 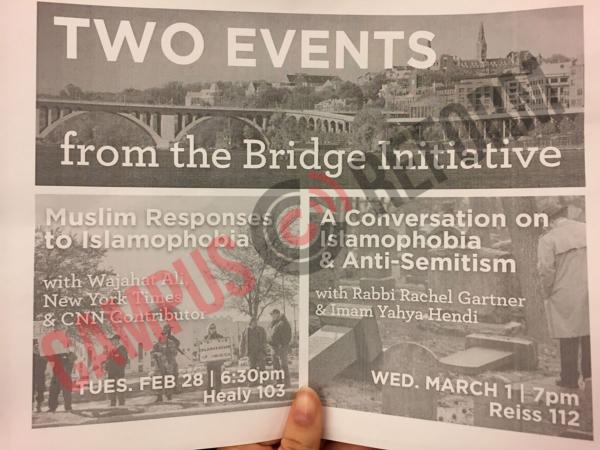 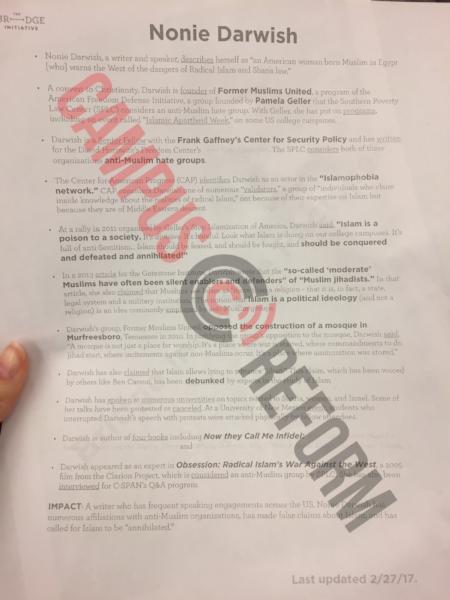 Darwish addressed the backlash against her invitation during the Q&A portion of the event, explaining that although she recognizes the right of people to be offended and not attend, she wished that at least some of them would have come to “ask questions.”

In response to a question from Campus Reform, she elaborated that she feels there is a double standard in the way people on college campuses “tippy-toe” around Islam but speak freely about other religions.

“This is scary to me,” Darwish stated. “I want to kiss [the floor of America] because it gave me dignity as a woman, and I am speaking because I want to save you from making any ideology, not just Islam, above criticism. I beg you consider that.”