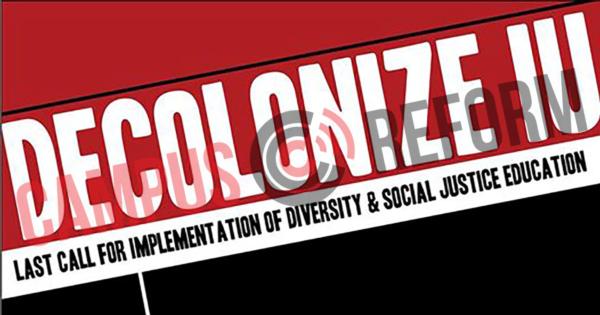 A rally Wednesday afternoon resulted in a disrupted workplace and gridlocked traffic as student protesters marched to demand more diversity at the Indiana University-Bloomington campus.

The rally and march was organized by the student group Students Against State Violence (SASV) in support of a Resolution on Diversity that was passed last April by the Faculty Council, because according to the SASV, the university “has been delaying and opposing its implementation.”

“Whose streets? Our streets!”

The resolution required the university to “figure out how to hire and retain more underrepresented faculty and staff of color,” “change the General Education requirements to include a requirement for social justice education,” and “enroll more students receiving Pell Grants.”

SASV describes itself as “an anti-capitalist student group...building a movement against poverty and the systems that cause it: white supremacy, gender violence, deportation, militarism, policing, and the prison system.”

The protesters began their rally in the main lobby of Ballantine Hall, where student speakers gave short speeches through a megaphone while classes were in session inches away.

The speakers made it clear that they are not open for dialogue with the university until their demands are met, expressing a number of grievances with IU, such as how they believe the university’s Department of Gender Studies is racist. One speaker even stated that in order to be anti-racist, one must also be anti-capitalist, ending his speech with, “Decolonize IU, or face the consequences!” 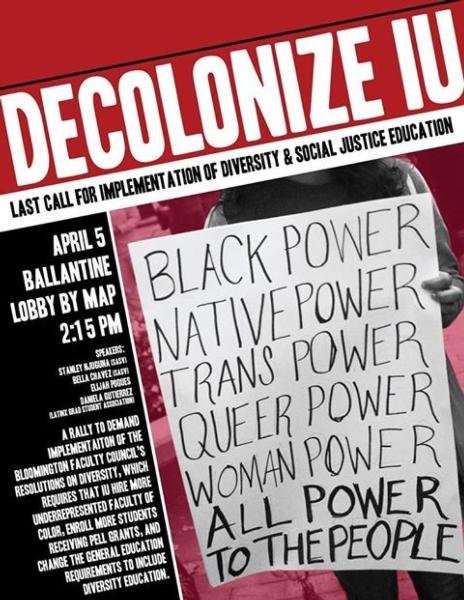 Following the rally, the students led their march down Indiana Avenue with banners, signs, and a speaker playing music.

Upon approaching a street, the protesters waited for a green traffic light to make their way across, blocking incoming traffic and university busses. They were met with the horns and shouts of angry travelers and retorted with chants of “Whose streets? Our streets!” and “No justice, no peace!”

The crowd was followed closely by IUPD and instructed to not disrupt the workplace, but after arriving at the provost’s office, they entered and began reading from their demand letter. According to The Indiana Daily Student, a staff member at IU handed out a copy of the university’s official response to the protest:

“The term or designation of ‘sanctuary campus’ is legally vague and offers no actual protection, legal or otherwise. It’s important to know that Indiana University remains unwavering and steadfast in its’ support of all it’s students, faculty and staff regardless of personal characteristics, background, country of origin, or documentation.”

Marissa Gentry is an Indiana Campus Correspondent, and reports liberal bias and abuse for Campus Reform. She studies Environmental Science and Policy at Northeastern University and is involved in Young Americans for Liberty and Students for Sensible Drug Policy.