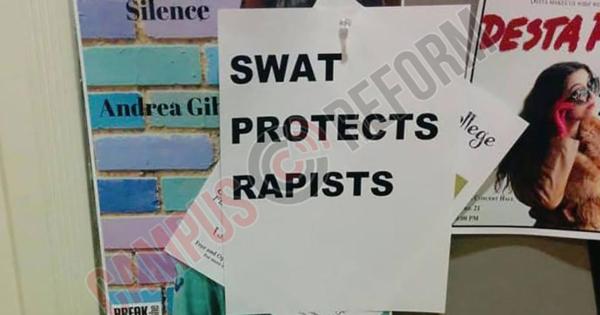 An anonymous group of students at Swarthmore College has taken to etching “SWAT PROTECTS RAPISTS” and distributing corresponding posters across campus.

On an associated website, the group accuses Swarthmore of mishandling sexual violence by “[protecting] perpetrators while antagonizing, neglecting, and traumatizing survivors,” claiming that the school’s policies offer implicit advantages to the accused, particularly fraternity members, and that administrators do not adequately enforce disciplinary sanctions.

“Your ownership of fraternity houses is inherently dangerous.”

Specifically, the group accuses the school’s Public Safety officers of “prioritizing the safety, well-being, comfort, and joy of perpetrators of sexual and physical violence,” claiming that those officials “are routinely condescending and inappropriate towards survivors and concerned students,” and neglect to enforce both no-contact orders and social probation.

The students also take aim at two Swarthmore fraternities, Phi Psi and Delta Upsilon, devoting an entire page of the site to complaints about their “exclusionary” and “dangerous” nature.

“Your ownership of fraternity houses is inherently dangerous,” the list begins, asserting that this gives fraternity members control over “who can drink and how much..who can play, who can dance on stage or on the balcony, [and] who gains access to your most private spaces.”

Claiming to know from personal experience that fraternity members “use slurs, grope women, ignore and marginalize students of color, berate queer couples, and intimidate partygoers,” the group declares that “fraternities will never be equitable, fair, good, even safe, for women or people of color or queer people” because they “were designed to be exclusionary pockets of prestige and power” from their inception.

In support of its allegations, the group cites an alleged instance from 2014 in which “a queer man was told that there were ‘no fags allowed’ at Phi Psi,” but current Phi Psi President John Calia told Campus Reform that there are doubts regarding that claim.

Although he “was not yet a Swarthmore student” when the alleged incident occurred, Calia noted that he had “reached out to some alumni who were, and they said unanimously that it did not happen.” He went on to say that Phi Psi seeks to create an “inclusive party space that the community at large can enjoy.”

Another member of Phi Psi, who wished to remain anonymous due to fears of being ostracized by students on campus, disagreed even more vehemently with the assessment of fraternities on the Swat Protects Rapists website, saying the students who created the site made “sweeping generalizations about issues that [Phi Psi] takes so seriously.”

He speculated that the creators of the website know very little about the fraternities and about their “participation in workshops on bystander intervention, alcohol and drugs, and others,” saying he absolutely “abhors rape and nonconsensual behavior,” and that all of the fraternity’s members work “to the best of our ability to make sure that type of behavior is not tolerated.”

When asked what he would say to the creators of the website, the Phi Psi member told Campus Reform that he would ask them to talk to fraternity members about this topic so they can have a “constructive dialogue” because the fraternities honestly want to “make the campus a safer environment.”

The Phi Psi member also lamented the treatment of all fraternity members as a single entity, explaining that for “every other social group on campus, everyone recognizes the person-to-person differences in viewpoints, but for fraternities each member is treated as having the same opinions as the perceived group beliefs.”

Stressing that he has no desire to discount any legitimate accusations, he contended that the website does not make any legitimate claims about campus culture, calling it a compilation of “baseless slanders” that is “counterproductive and antithetical to the mission of Swarthmore College.”

Campus Reform reached out to members of the Delta Upsilon fraternity, but they declined to comment. Campus Reform also reached out to the Swarthmore administration and the creators of the Swat Protects Rapists website for comment, but did not receive a response from either in time for publication.