University of Maryland campus police launched an investigation into a discarded piece of plastic wrap Tuesday after receiving a report about a “possible hate-bias” incident.

The plastic was found "under a tree at frat row," which some students found suspicious because a noose was found in a fraternity house in April. 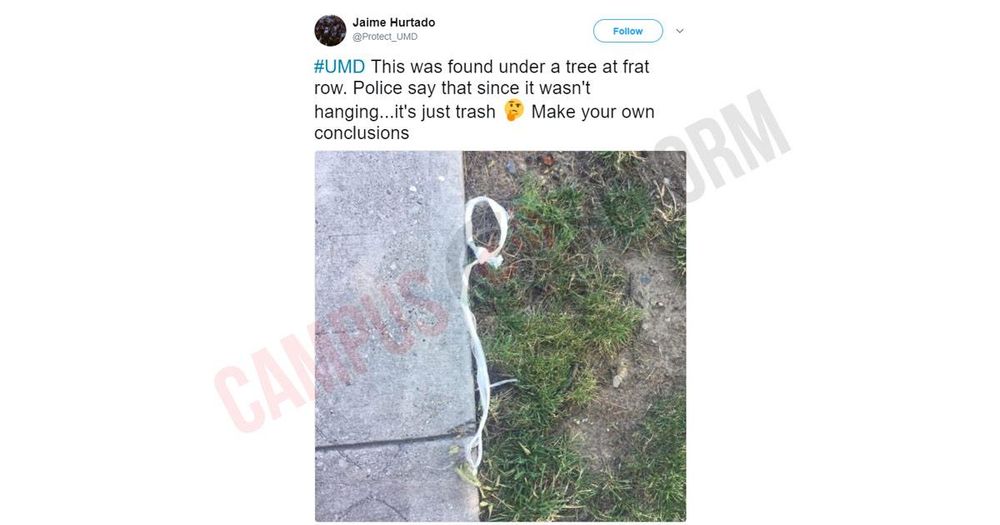 University of Maryland campus police launched an investigation into a discarded piece of plastic wrap Tuesday after receiving a report about a “possible hate-bias” incident.

“Out of an abundance of concern, we are looking into this matter and conducting a review of our cameras in the area,” the department informed students via email, though The Diamondback reports that some students were upset when officers initially dismissed the object as garbage.

A UMD student tweeted a picture of the plastic wrap suggesting he was convinced that the detritus was intended to resemble a noose because it had been “under a tree at frat row,” alluding to an actual noose that was reportedly found in a fraternity house in April.

“Police say that since it wasn't hanging...it's just trash,” the student remarks, inserting a skeptical emoji before asking viewers to “Make your own conclusions.”

In response, another student remarked that "I'm sick and tired of all these fucking nooses."

“Earlier today, we were notified of a knotted piece of plastic wrap laying on the ground in the 7500 block of Baltimore Ave. Police were notified out of concern for possible hate-bias,” the campus police department stated in its report on the incident.

“Preliminary investigation reveals that this type of material is used to contain loose items during transport,” the report added, but said the matter would be reviewed further “out of an abundance of caution.”

The alleged noose sighting comes in the wake of UMD President Wallace Loh’s pledge to spend an additional $100,000 to support diversity in response to the killing of a black Bowie State University student by a white UMD student with ties to white supremacist groups.

Some students have derided the university’s response as insufficient, and the Black Student Union began circulating a petition recently declaring that the administration “must expand the consequences for hate speech and make the Code of Student conduct in regard to hate speech less vague.”