But in a recent meeting with the university’s College Republicans chapter, the ticket’s candidates tried to court votes and support from the chapter’s members, assuring that they would support their efforts to host Ben Shapiro on campus.

The resolution calls Shapiro a “white supremacist,” and requests that “whatever measures are necessary be taken to prevent this event from taking place.”

Editor's note: The author of this article is involved with the Syracuse University College Republicans chapter, the group that sought to bring Ben Shapiro to campus.

The Syracuse University Student Association presidential ticket proposed a resolution “to condemn the appearance of a white supremacist” on campus in response to a budget request approved by the Student Finance Board to host conservative political commentator Ben Shapiro this fall.

The resolution requests “that whatever measures are necessary be taken to prevent this event from taking place.” The ticket doubled down on calling Shapiro a “white supremacist” in a follow-up statement, claiming that they “did not overreact or exaggerate when [they] referred to Ben Shapiro as a white supremacist.”

“...being Jewish and believing that people of color are inferior to white people is not mutually exclusive,” the candidates stated. “Shapiro’s generalistic and harmful comments about Arabs and Palestinians promote white supremacy.”

The resolution goes on to cite that Shapiro has “refused to address people with respect by using their proper pronouns,” and that he has “stated on multiple occasions that trans women are not real women,” as evidence of Shapiro’s dangerous nature. The resolution also accuses Shapiro of having “attempted to downplay the role of slavery in the founding of the United States.”

“Ben Shapiro is overtly xenophobic and biased against those of marginalized communities,” the resolution continues. “Whereas, inviting such a divisive and hateful speaker does not support the students of Syracuse University and serves no legitimate purpose other than to antagonize students of marginalized identities and divide our campus even further.”

But the College Republicans chapter says that in a recent meeting, the very same candidates tried to court votes and support from the chapter’s members, assuring that they would support their efforts to host Shapiro on campus.

“I served on the finance board when you guys tried to get Ben Shapiro two years ago and I voted in favor of it,” SA Vice Presidential Candidate Ryan Golden responded.

The Student Association’s Finance Board initially denied a budget request from the SU College Republicans when they tried to host Shapiro on campus back in 2017. The chapter’s co-chairs at the time alleged that the Finance Board made their decision out of bias against conservatives.

“I don’t have to agree with it to believe that people on this campus do agree with him and that they maybe would want to hear him speak,” Golden continued during his meeting with the chapter.  “Personally, as someone who disagrees with Ben Shapiro, I would go to hear him speak, because I don’t feel that living in a vacuum of being in a bubble helps me grow.”

SA Presidential Candidate Justine Hastings added that “Colleges are supposed to be places where people think critically and just because you don’t agree with a speaker, doesn’t mean you can’t just listen to what they have to say.”

When the SA ticket later announced its condemnation of Shapiro on Instagram, members of the SU College Republicans chapter took to the comments section and accused them of lying.

“You looked me in the eye as you dared to tout the importance of free thought, only to turn around and betray your own word just for the simple gain of some votes in an SA election,” Leroux wrote.

“Have a shred of honor and either admit to changing your position or lying altogether,” he wrote in a separate comment. 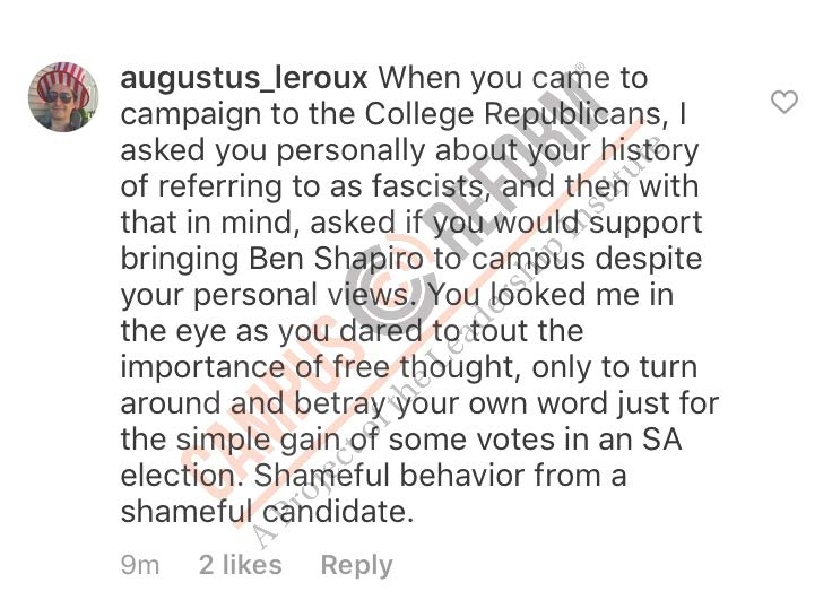 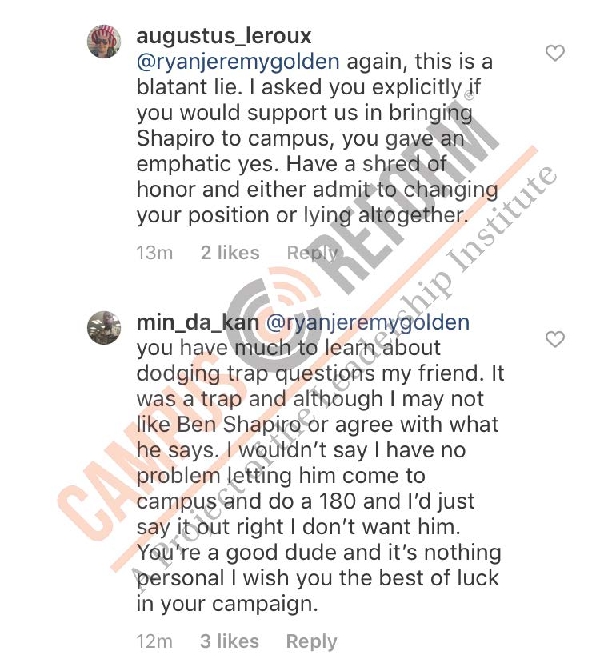 Another chapter member, Grant Tessitore, called Golden’s actions “a slimy political move,” in an interview with Campus Reform. He claimed this was an attempt to “gain votes and support from a group he knew would never give him support otherwise.” In Golden and Hasting’s follow up statement, the candidates acknowledge the meeting but deny accusations that they lied to members of the College Republicans chapter.

“We, given our limited knowledge of Shapiro, stated that we would support his appearance at SU if he meets certain criteria,” they wrote. “This criteria [sic] being that Shapiro, or any guest on SU’s campus, must not perpetuate discrimination against any group on this campus.”

[RELATED: Students demand ability to select roommate based on race during days-long sit-in]

“Upon further research of Shapiro, it is clear that he does not meet this criteria [sic] that we both emphasized during our meeting with the College Republicans,” the statement continued.

SU College Republicans Chair Rody Conway told Campus Reform that he has a “hard time believing” that Golden, “who apparently prides himself on his attention to detail would have absolutely no idea that Ben Shapiro has said things that he finds detestable.”

Hastings and Golden's follow up statement also suggested that the SU College Republicans chapter “could have picked a more respectful speaker as one can promote conservative values and still respect human rights and the safety of students on campus.”

“So what speaker can we bring and have support?” Hall asked in an interview with Campus Reform. He alleges that Golden has “been known to attack members of the SU College Republicans,” calling them “fascists.”

Other members of the chapter expressed concern that the Hastings/Golden campaign is attacking their First Amendment rights.

Hastings and Golden implied that hosting Shapiro on campus violates the university’s Code of Student Conduct.

“Although hate speech is legally protected as free speech under the First Amendment, according to Syracuse University’s Code of Student Conduct, all Syracuse University students are expected to conduct themselves in a manner that supports and promotes the educational mission of the University,” they stated. The candidates added that this also applies to student organizations.

The Student Association’s Finance Board sent an email to the student body, responding to the backlash against inviting Shapiro.

“We have seen your concerns via social media and other platforms and are here to listen to your concerns,” the email stated.

The Finance Board assured the objectors that when a budget proposal is approved for a speaker, “it is not a confirmation that this person is coming to campus.” The board explained that its job is simply to make sure there is a budget in place to support proposals for speakers or entertainers invited to campus by recognized student organizations and that it cannot judge the appropriateness of the invited guests or evaluate criticisms.

Candidates Hastings and Golden commended the actions of the Finance Board, stating that they do not believe it is their fault for approving the budget request to invite Shapiro on campus.

“The Finance Board did their job,” they stated. But they criticized the university’s Student Assembly for allowing this request to be approved.

“We believe that the Student Assembly should have inquired who the speaker was and then make an informed decision not to approve the budget request,” Hastings and Golden wrote.

“The Assembly has the discretion to include more criteria in their decision that the Finance Board is simply not allowed, and therefore should have used it to deny this request.”

During a virtual debate held this week among all of the presidential and vice-presidential candidates running for Student Association, each ticket condemned Ben Shapiro but disagreed on whether to prevent him from visiting campus.

Golden bragged that he was “proud” of being the first campaign to “call out this horrendous idea of a speaker.”

"Ben Shapiro does not represent 'conservative values.' He represents this hateful vision of America that we can’t tolerate. And we've made it clear, we're not going to support in any way, shape, or form, bringing someone to campus who has this vision."

Golden added that “we shouldn't be bringing someone to campus who will not address transgender students properly and will make sure that they do everything they can to antagonize marginalized students.”

But another ticket suggested that although they dislike Shapiro, preventing him from speaking on campus would shut down open discourse.

“We can't promote dictatorship, we can't promote something of, like, controlling who someone brings to campus,” argued SA Presidential candidate Sadia Ahmed.

She suggested that students should instead “mobilize” and protest in front of Ben Shapiro.

Campus Reform asked the  Hastings and Golden ticket for further comment. They declined.

Justine Brooke Murray is a booker and weekly contributor at One America News Network. She used to be a New York Campus Correspondent. Justine graduated the Maxwell School at Syracuse University, with a major in Political Science. She has previously served at the White House as an intern for former Vice President Mike Pence. Justine has appeared as a guest on numerous new shows, including FOX News Digital, OANN, the Joe Pags Show and the...