The Federalist Society President, Richard Angel, told Campus Reform that not only is his chapter non-partisan but that the majority of its members are people of color.

UC-Irvine Law Admissions apologized for spotlighting the campus’ chapter of the Federalist Society on its Instagram page after students commented on the post claiming that the organization “advocates against marginalized groups.”

A student group that seeks to “preserve freedom” and advocates for the “separation of governmental powers” found itself amid a slew of accusations of “racism” after a law school admissions department dared to highlight the group to potential students on social media.

An Instagram post from the University of California, Irvine Law Admissions page sparked outrage because it spotlighted the Federalist Society, a campus organization that is “a group for people of all ideological backgrounds,” as stated in the post description. Comments under the post include students saying that the timing of the spotlight was “extremely tone-deaf” and “ill-timed” due to claims that the Federalist Society “stands with the establishment and the oppression of the marginalized.”

Commenters referred to the Federalist Society as “racist, sexist, white lawyering,” and “anti-Black, anti-LGBTQ, and fascist.”

The Federalist Society national organization describes itself as “a group of conservatives and libertarians interested in the current state of the legal order,” that “is founded on the principles that the state exists to preserve freedom, that the separation of governmental powers is central to our Constitution, and that it is emphatically the province and duty of the judiciary to say what the law is, not what it should be.”

After receiving online backlash, UCI Law Admissions issued an apology the following day in another Instagram post for “the timing of the post” and addressed concerns that the comments had been disabled at some point after its posting.

“In our desire to continue to highlight different student organizations each week, we highlighted UCI’s Federalist Society,” read the post. “We do not edit a student group’s self-description. We apologize both for the timing of the post and for disabling comments. We appreciate the members of our community who reached out to us, and welcome conversations with any student or groups of students. You spoke, we will continue to listen, and we will take affirmative steps to evaluate how best to manage this account, keeping your concerns in mind.”

Chapter leaders of the Federalist Society later received a letter from the Student Bar Association, offering an explanation for public condemnation of the post. The SBA wanted to ensure members that they did not mean to make the group “feel divided from our student body” or “to indicate that the Federalist Society should not have been featured on the UCI Law Admissions page” but that they only wanted to “call attention to the fact that admissions handled the timing of the post, and subsequent feedback, poorly.”

The SBA shared that it had “received ample comments from students who support you as an organization and feel that their voices have been minimized.” 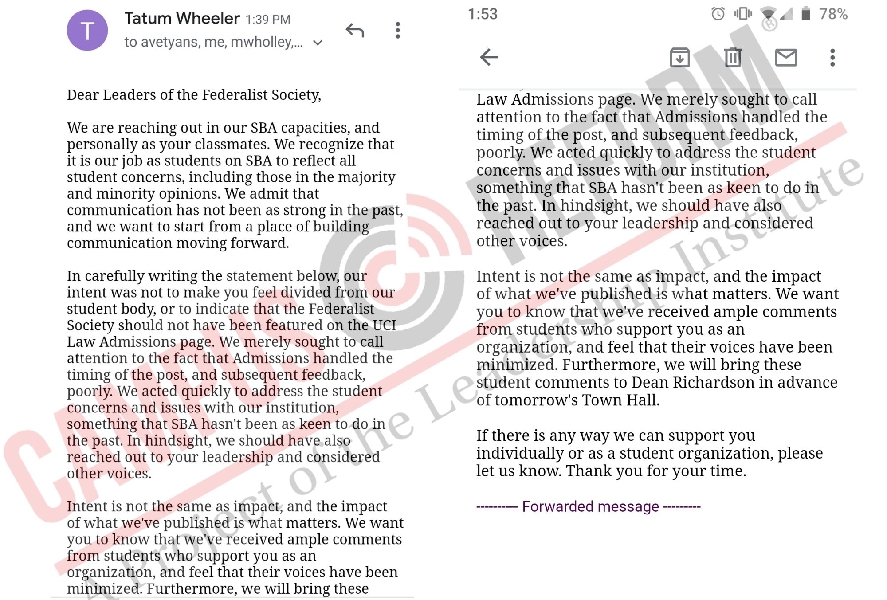 The author of the letter and the dean of the UCI School of Law, L. Song Richardson, have not responded for comment.

[RELATED: Student governments are still getting away with denying conservative groups based on ideology]

The organization’s president, Richard Angel told Campus Reform that suggestions of his group being a racist one are baseless and that the group is not a political one.

“Our group is dedicated to the law, not politics. We believe that judges should interpret laws as they were written,” said Angel. “Most of our members are actually people of color. It’s astounding to me how people at UCI will just condemn someone.”

Angel shared that after the original post went live, he received a message from a girl he’d never met stating that he should never talk to her if he happens to see her on campus because she saw that he’d liked the post about a “hateful” group.

In describing his club, Angel mentioned that he chose to organize his chapter of the Federalist Society as non-partisan due to the overwhelming majority of left-leaning students on the UCI campus. He says, “most of our members are actually moderate to left-leaning.”

A town hall meeting is set to take place via Zoom on Friday with Assistant Dean for Student Affairs and Inclusive Excellence Jennah Jones in which the issue will be addressed. Angel claimed that in an email he received from Jones, she shared that the last few days have been “difficult and emotional” because of the Instagram post. 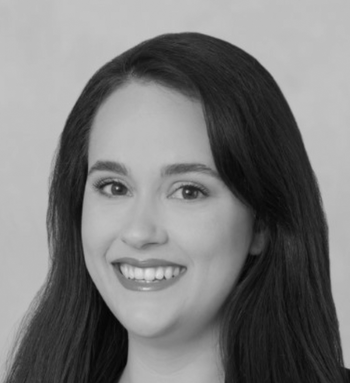 Michelle Weston is a senior at the University of California, Los Angeles majoring in Economics with a minor in History. She is currently a small business owner, operating a luxury automotive brokerage with her husband while she attends school. Upon graduating, Michelle plans to work in commercial real estate in brokerage.