Students allegedly discussed the incident in a private group chat, which the student subsequently left.

A New Jersey college student reportedly faces punishment after he used a photo of President Donald Trump as his Zoom background.

The student was later informed that he faces student conduct code violation charges including "disruptive behavior."

Trending
1
Incoming freshmen at over 1,800 colleges did not have to take the SAT or ACT, report cl…
By Amanda Mayer  '24
2
Theology professor claims that the Bible is neutral towards abortion
By Emily Fowler  '23
3
Being politically correct at work can lead to negative behavior, professors find
By Logan Dubil  '23
4
WATCH: Forgive Student Loans But Not Credit Card Debt
By Jaden Heard  '24
5
Summer break did not stop scholars from airing pro-abortion messages
By Amanda Mayer  '24
6
Stacey Abrams admits to being pro-life until she went to college
By Alexa Schwerha
Ben Zeisloft | Staff Reporter, Daily Wire
Friday, August 7, 2020 1:28 PM

The Foundation for Individual Rights in Education (FIRE) sent Stockton University a letter, expressing concern that the university may have disciplined a student after he used a photo of President Donald Trump as his Zoom background in one of his online courses.

According to FIRE’s letter, Stockton University doctoral student Robert Dailyda utilized the Trump background during a class held via Zoom on July 1. There was no evidence that the Zoom background affected classroom order, according to the letter.

Dailyda removed himself from the chat and expressed his disappointment on Facebook.

“I am done with the leftist agenda of BLM and the white self haters,” Dailyda said, according to FIRE. “I have seen it in action in my doctoral classes at Stockton and the general media. I’m not backing down. If we can't get past this, ok, I’m ready to fight to the death for our country and against those that want to take it down." 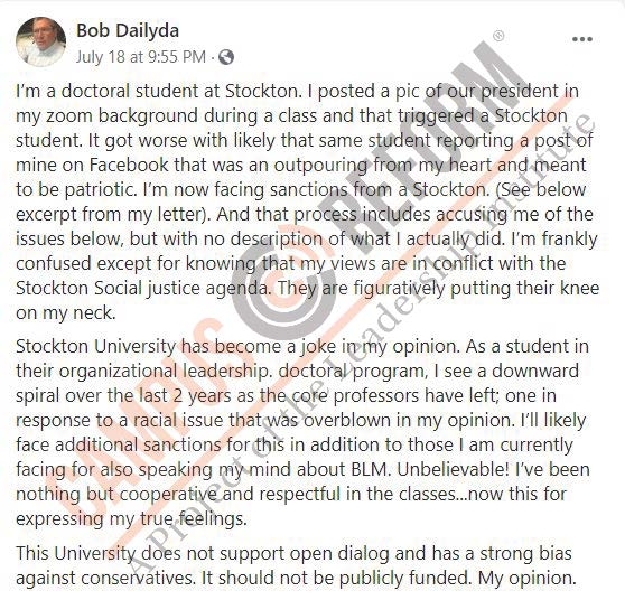 But on July 3, university police contacted Dailyda, informing him they had received a report claiming he made threatening statements, FIRE said.

Dailyda met with two members of Stockton’s Care and Community Standards Office on July 10. The letter alleged that they informed Dailyda that students were offended by his Zoom background and Facebook post, and that the two university employees asked him to explain his political views. The letter then said that  on July 16, Stockton charged Dailyda with violating the Disruptive Behavior, Discrimination, Harassment, Hostile Environment, and Harm provisions of its campus code.

"While a university has a critical interest in ensuring that classroom discussions are not substantially and materially interrupted, that interest does not justify punishing a student for non-disruptive expression, even when it occurs in the classroom context," FIRE said.

Referring to the Supreme Court’s 1969 ruling in Tinker v. Des Moines, which addressed the First Amendment rights of students, FIRE called on Stockton to rescind the charges against Dailyda by August 11.

According to FIRE, Dailyda had until Friday to contest the charges, which he is doing by sending the college FIRE's letter.

The letter states that a university employee informed Dailyda during a pre-trial hearing that he could face up to a “[s]uspension, $50 fine, community service project, social justice workshop, and decision making workshop" if he is found to be in violation of the student code.

Stockton University did not respond to Campus Reform's request for comment in time for publication.

"I’m frankly confused except for knowing that my views are in conflict with the Stockton Social justice agenda. They are figuratively putting their knee on my neck. Stockton University has become a joke in my opinion," Dailyda wrote on Facebook.

As a student in their organizational leadership. doctoral program, I see a downward spiral over the last 2 years as the core professors have left...I’ll likely face additional sanctions for this in addition to those I am currently facing for also speaking my mind about BLM. Unbelievable!" he added. "This University does not support open dialog and has a strong bias against conservatives. It should not be publicly funded."

FIRE spokesman Zachary Greenberg told Campus Reform Friday that "Mr. Dailyda's expression is protected under the First Amendment, which Stockton is bound to uphold" because Stockton is a public university.

"FIRE is hoping the university sees the light and rescinds the disciplinary charges against him. We're going to give Stockton a chance to make this right," Greenberg added.

Stockton University spokeswoman confirmed to Campus Reform after the initial publication of this article that Dailyda is "involved in an open Code of Conduct case" but declined to comment further because "the university does not comment on open cases."