Campus Reform | Columbia marching band, ‘founded on the basis of racism,' votes to ‘dissolve’ itself

Columbia marching band, ‘founded on the basis of racism,' votes to ‘dissolve’ itself

The move comes after anonymous social media uses made allegations of racism against unnamed band members.

The Columbia University Marching Band will dissolve after more than 100 years. 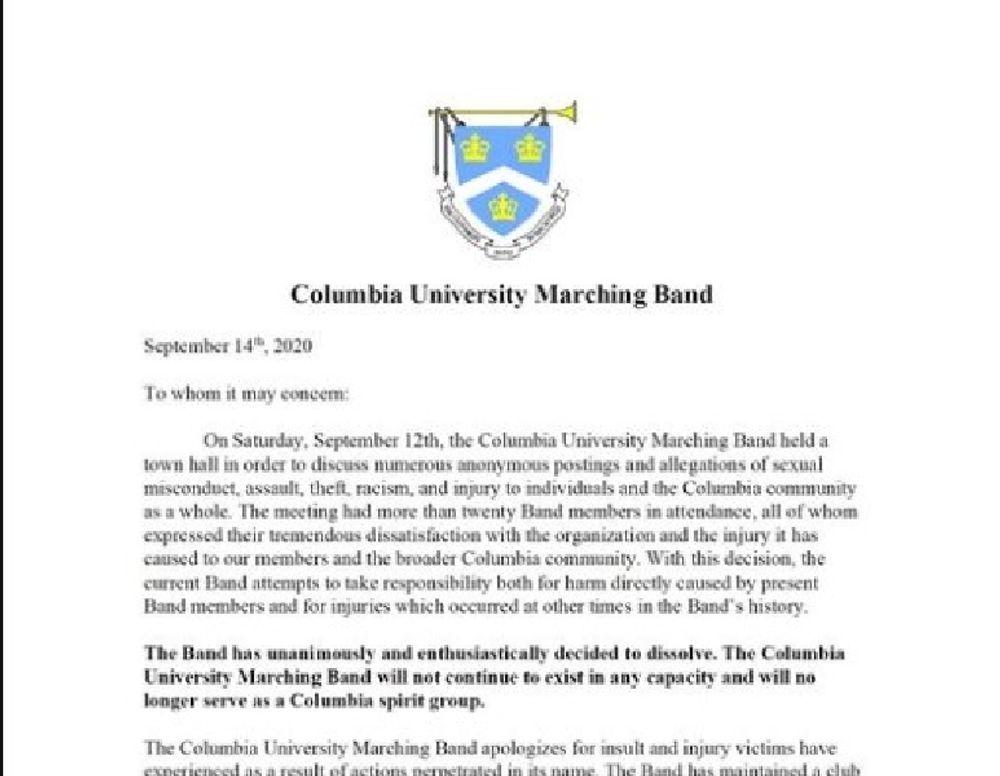 The Columbia University Marching Band will disband “unanimously and enthusiastically” due to “racism, cultural oppression, misogyny, and sexual harassment.”

An announcement posted to the group’s Facebook page, begins with a “TW,” or “trigger warning,” and explains that more than 20 band members met on Sept. 12 to discuss anonymous social media postings that accused individual marching band members of “sexual misconduct, assault, theft, racism, and injury to individuals and the Columbia community as a whole.”

The band then unanimously decided that it would “dissolve” itself and would “no longer serve as a Columbia spirit group.”

[RELATED: UGA marching band will no longer play 'Gone With the Wind' song]

“With this decision, the current Band attempts to take responsibility both for harm directly caused by present Band members and for injuries which occurred at other times in the Band's history,” the band stated.

The marching band (!!) at @Columbia was apparently “founded on the basis of racism, cultural oppression, misogyny, and sexual harassment.” This left the band no choice but to disband “unanimously and enthusiastically.” pic.twitter.com/P5FFFx5PtP

The marching band says that its club structure was “founded on the basis of racism, cultural oppression, misogyny, and sexual harassment.” They hope that the band’s dissolution “will provide relief to the present suffering of the Columbia community and time to heal from the decades of harm caused by this organization.”

On Sept. 3, the band detailed anonymous posts made on the Columbia Confessions Facebook page that accused unnamed students of wrongdoing.

In addition to its statement, the band publicized a form to collect feedback “on any and all issues and concerns ranging from incidents with specific bandies to group-wide problems.”

“We also do not tolerate any racist, sexist, transphobic, or otherwise harmful behavior, and we absolutely do not condone personal theft,” read the form. “We fully apologize for any pain or injury the band has caused, and we are working to atone for this pain.”

Campus Reform reached out to Columbia University and the marching band and will update this article accordingly.