His comments came amid news that Jacob Blake in Kenosha, Wisconsin had been chained to the hospital bed.

A professor in the Department of African American Studies at Princeton University said the shooting of Jacob Blake shows that slave codes still exist.

Princeton University Professor and Chair of the Department of African American Studies Eddie Glaude Jr. said that when it comes to policing in America "Black people still live under the slave codes."

Glaude's tweet came in response to news that Jacob Blake was handcuffed to his hospital bed after being shot by police in Kenosha, Wisconsin.

"Placing shackles around the feet of Jacob Blake amounted to a physical reminder that he was still, no matter the protests, a n*gger in the eyes of these policemen. Baldwin was right: when it comes to policing in this country black people still live under the slave codes."

[RELATED: UNC professor: ‘They have deputized all White people to murder us’] 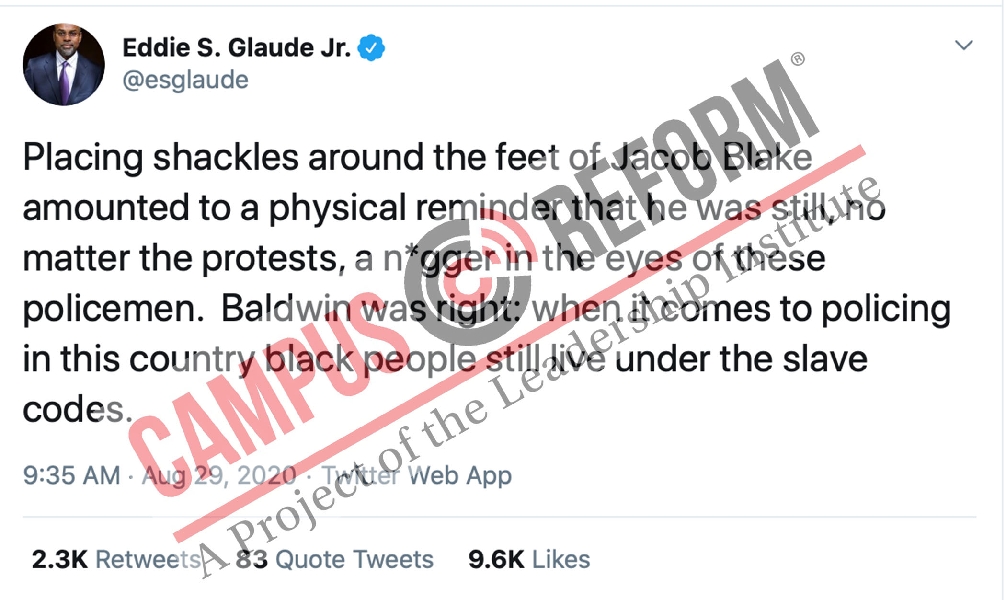 Jacob Blake Sr., Jacob Blake’s father, responded to the news that his son was handcuffed and restrained, and said he felt angry because his son is “chained up," despite being paralyzed from the waist down. Glaude Jr. wrote a book about James Baldwin, which is being given to students for free by the Princeton student government, as Campus Reform previously reported.

“Baldwin’s writing does not bear witness to the glory of America. It reveals the country’s sins, and the illusion of innocence that blinds us to the reality of others. Baldwin’s vision then requires a confrontation with history (with slavery, Jim Crow segregation, with whiteness) to overcome its hold on us. Not to posit the greatness of America, but to establish the ground upon which to imagine the country anew,” Glaude writes in the book, according to his faculty profile.

Campus Reform reached out to Princeton and Glaude for further comment but did not receive a response in time for publication.

Glaude has a history of making these types of comments, comparing modern-day life for Black Americans to that of slavery.

In August, Campus Reform reported that Glaude called President Donald Trump a "plantation owner. And, in 2019, Glaude said during an interview on NBC that using the term illegal immigrant "sets the stage" for mass shootings, and that "no human being is illegal."