The demands include making police funding contingent on metrics regarding the department’s racial interactions.

The Purdue University Black Student Union (BSU) has released a list of “constructive demands” for police reform following the release of a viral video showing a police encounter with a Black student.

The group also demands that the university police department record and present metrics on all interactions with student organizations and events to the Equity Task Force and Office of Diversity, Inclusion, and Belonging every month.

“These metrics shall be used as a factor in determining police department funding and officer compensation,” the group states in an Apr. 12 letter posted on Instagram.

After a video surfaced of a black student named Adonis Tuggle being restrained by a campus police officer after resisting arrest following a domestic incident, the Purdue BSU condemned the actions as “police brutality." 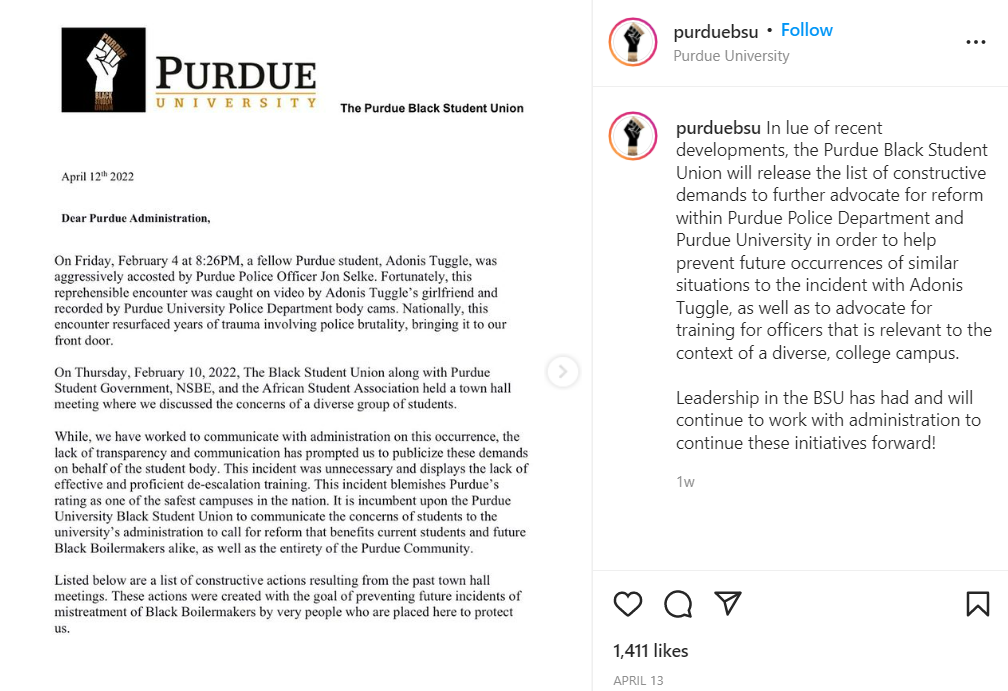 The officer "used reasonable force to overcome Mr. Tuggle's resistance and avoided a potentially dangerous situation. At no time did Officer Selke choke Mr. Tuggle,” according to a report from the Madison County Prosecutor.

Additionally, the report stated that Tuggle will not face charges for his domestic incident, however, "probable cause exists for multiple criminal charges."

Purdue’s BSU still called the police encounter “unnecessary,” claiming it “blemishes Purdue’s rating as one of the safest campuses in the nation.”

In its letter posted on Instagram, the club demands that all campus officers take “racial bias training that is peer-reviewed and approved by the Racial Equity Institute and other experts on racial bias training” following the principles detailed in Harvard Business Review’s “Unconscious Bias Training that Works.”

A number of scholars and studies have come out over the last several years appearing to show a lack of evidence that implicit bias training is effective or productive.

BSU further demands that a social worker wearing a body camera be present for all “non-violent or domestic violence calls,” “improved” training on conflict resolution and de-escalation, the doubling of required hours of training before an officer can serve, and that all body camera footage be made publicly available.

This is not the first time racial justice groups on campus have made demands of the administration, as last year a list of demands was distributed at The College of Wooster in Ohio, demanding bias training for faculty and staff as part of its seven-item list.

At the same school, the BIPOC Performing Arts Alliance issued a list of demands including the implementation of a casting quota for black actors and the resignation of one professor.