A University of Akron honor society posted flyers around campus that provided affirmations to students based on their identities.

A University of Akron (UA) honor society posted flyers around campus that provided affirmations to students based on their identities.

Campus Reform obtained a photo of the flyer at the Ohio university that included seven different statements dedicated to six different identities. Students were divided by race, gender, ethnicity, and sexual orientation.

The poster also ensures "female students" that they will have men's respect because "[UA] will demand it," and tells LGBTQQIA students that they "will find support" on campus.

The poster concludes by acknowledging "international students" that they are welcome at UA and reminds "all students" to "thrive" and "learn" from each other.

"You belong here," the poster reaffirmed. 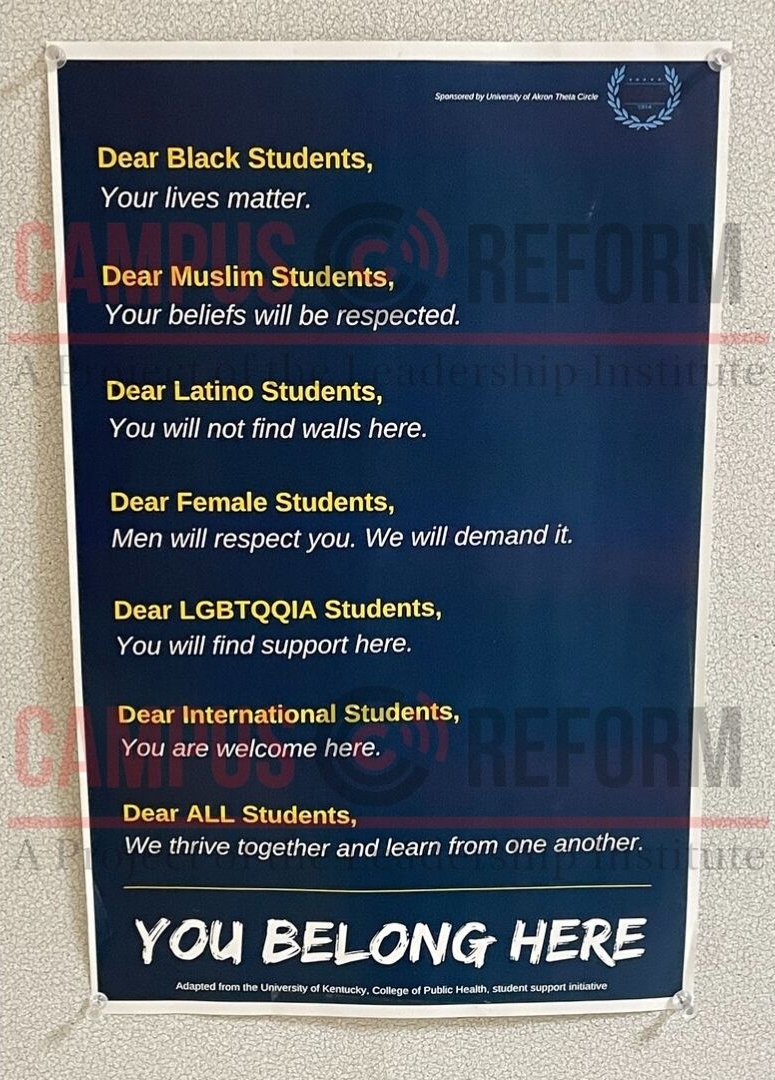 UA Theta Circle is a branch of Omnicron Delta Kappa and recognizes students who excel in leadership and academics.

The Akron poster states that it was adapted from the University of Kentucky (UK) College of Public Health.

However, UK Chief Communication Officer Jay Blanton told Campus Reform that the Ohio poster "has nothing to do with any student support initiative in our college of public health."

The posters are, though, part of a diversity and inclusion campaign adopted by the chapter as one of its advertised programs.

Omnicron Delta Kappa has taken steps to increase its commitment to diversity and inclusion. The society adopted a diversity statement that claims it "affirms and promotes openness and inclusiveness among all people."

"Membership selection shall be free of bias so that all qualified will be considered equitably for membership," the statement reads.

The society has also created a Diversity, Equity, and Inclusivity Committee to govern over the Board of Trustees and named a National Diversity Officer.

The University of Akron did not respond to Campus Reform’s request for comment in time for publication.