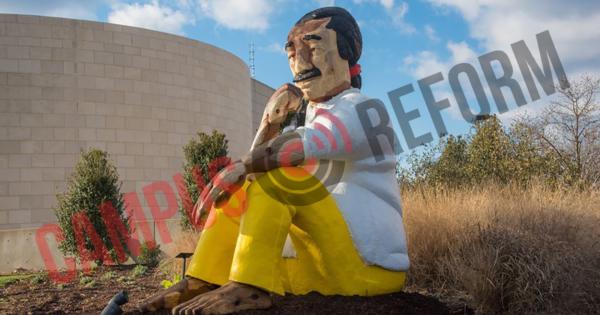 Facing backlash, American University has decided to remove a statue of a convicted cop killer that had been prominently displayed in front of its art museum.

As Campus Reform previously reported, the university installed the statue of Leonard Peltier as “part of a movement to raise awareness for Peltier’s pardon request.” Peltier was convicted of murdering two FBI agents in 1977, and received two life sentences.

“With the benefit of a fuller review, we have made a decision to remove the piece from this location.”

Supporters have been pushing for President Barack Obama to pardon Peltier in the last days of his presidency, and are promoting the clemency campaign with the 9-foot statue, which had been making its way across country before arriving at AU.

As the news of the statue spread, President of the FBI Agents Association Tom O’Connor sent a letter to American University’s president, asking for the school to remove the statue.

O’Connor expressed the FBIAA’s concerns about the statue, criticizing “the decision by American University (AU) to proudly display a statue of convicted murderer Leonard Peltier in an outdoor area, and to announce that decision by repeating slanted and misleading claims about Peltier’s murder convictions”.

O’Connor added that the university’s press release regarding the statue “includes misleading descriptions of Peltier’s case and a variety of hyperlinks to activist groups that have created a cottage industry dedicated to misleading the public about Peltier,” pointing out that the statement failed to “mention the names of the murdered FBI agents, the circumstances surrounding their execution, or the exhaustive judicial process already utilized by Peltier.”

While the statue was originally intended to remain on display until April, the university released a new statement Sunday announcing its decision to remove the Peltier statue from campus.

“The decision to host the Peltier statue required a more thorough assessment of the implications of placing the piece in a prominent, public space outside the museum,” the statement reads. “With the benefit of a fuller review, we have made a decision to remove the piece from this location.”

The statement adds that “the subject matter and placement of the piece improperly suggested that American University has assumed an advocacy position of clemency for Mr. Peltier, when no such institutional position has been taken.”

“The FBIAA is pleased that AU has decided to remove the statue of Leonard Peltier,” O’Connor told Campus Reform. “Two FBI Agents were executed in 1975, SA Jack Coler and SA Ronald Williams. Their deaths are still fresh in the minds of their families and with the membership of the FBIAA. We appreciate AU reviewing their stance on the statue and removing it from campus”.

The university has offered to work with the artist of the statue to actively find “an alternative organization that would be willing to exhibit the art”.