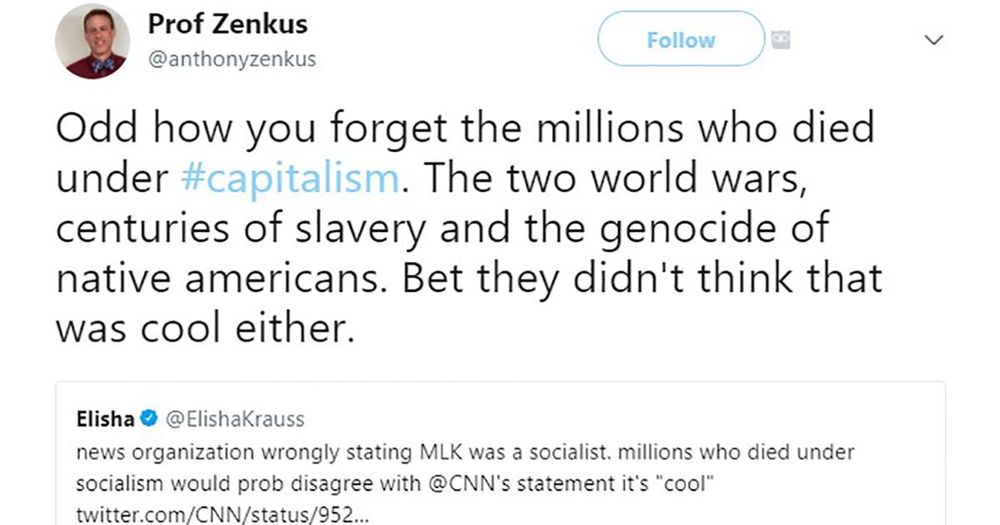 A Columbia University School of Social Work lecturer recently came to the defense of socialism by blaming capitalism for both world wars and “centuries of slavery.”

Professor Anthony Zenkus, who frequently lectures on income inequality and poverty, made his anti-capitalist remarks in response to a conservative journalist who had condemned CNN for tweeting that Martin Luther King “was a socialist before it was cool.”

“[N]ews organization [is] wrongly stating MLK was a socialist,” Elisha Krauss tweeted in response to the news network. “Millions who died under socialism would prob disagree with @CNN's statement [that socialism is] ‘cool.’”

Zenkus, however, appeared to disagree with Krauss, according to tweets compiled by Twitchy, accusing capitalism of everything from slavery to genocide of Native Americans.

“Odd how you forget the millions who died under #capitalism,” he tweeted. “The two world wars, centuries of slavery and the genocide of native americans. Bet they didn't think that was cool either.”

In reply to another Twitter user who called Nazism “a movement of the left,” Zenkus retorted that “Hitler was a capitalist,” and urged his interlocutor to use “the Google machine” to verify the assertion.

David Randall, a director of research at the National Association of Scholars, criticized the professor’s remarks about capitalism, arguing that while “you're not going to get good history from a tweet,” the lecturer’s claims “aren't the best you could do at that length.”

“Anthony Zenkus isn't a historian, so what he says about history only reflects the distorted, Marxizing history generally adopted by unthinking reflex among progressives,” Randall wrote in an email to Campus Reform. “His tweet is most important for revealing how important it is that history get taught right.”

“If you're taught to accept distorted, Marxizing history uncritically,” Randall continued, “you're liable to advocate uncritically for Marxizing policy in the present—and not even realize that other, more accurate history exists, which casts grave doubt on the desirability of Marxizing policy.”

Zenkus did not immediately respond to Campus Reform’s request for comment.