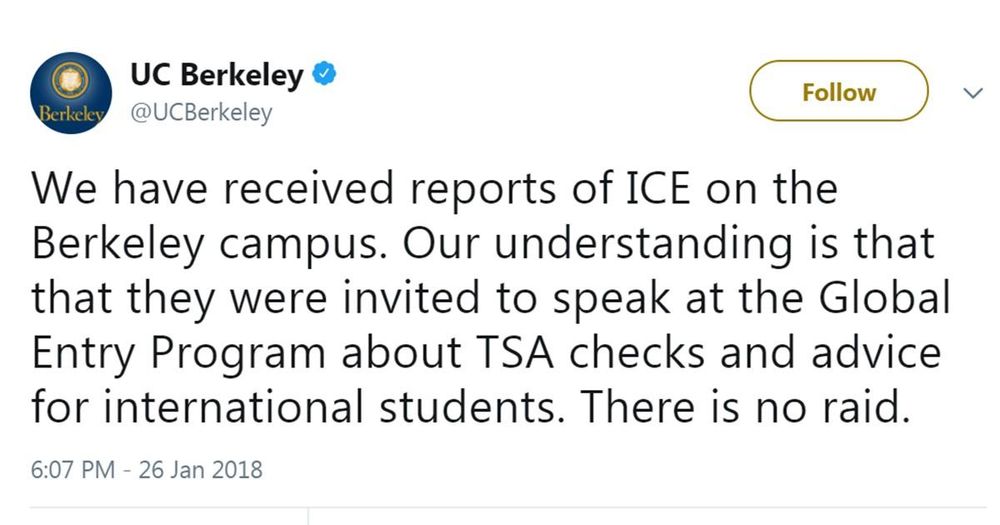 University of California, Berkeley students and community members went into a frenzy following reports of a U.S. Immigration and Customs Enforcement (ICE) presence on campus.

Kicking off the controversy, a U.S. Customs and Border Protection (CBP) vehicle was spotted on UC Berkeley’s campus on January 26, parked in a campus garage in close proximity to an academic building, according to The Daily Californian.

“We have received reports of ICE on the Berkeley campus. Our understanding is that that they were invited to speak at the Global Entry Program about TSA checks and advice for international students,” the tweet announced, assuring students that “There is no raid.”

UC Berkeley later deleted the tweet without explanation, but students and community members reacted to the news quickly.

“Berkeley, an email was sent out at 11:27 am regarding ICE on campus. Since, folks have confirmed presence and asked folks to be cautionary,” tweeted Gia, a self-described senior and Associated Students of the University of California (ASUC) senator.

In one instance, a Twitter user advised community members to avoid campus entirely, saying, “UCB folks, please take care of yourselves and avoid campus at all costs if uncomfortable. UCPD supposedly has confirmed that ICE is on campus.”

Zoe, a self-described PhD student at UC San Francisco, questioned why ICE was allowed on campus in the first place in another tweet, asking, “What’s the purpose of establishing the entire UC system as being a ‘sanctuary system’ if ICE is still allowed to traipse about campus?”

“Just what exactly is your definition of SAFETY for undocumented/documented immigrant students because raid or not, that’s still a trauma!” Zoe continued, adding in another tweet that “keeping ICE the hell away from all campuses” is necessary to “protect people,” and proclaiming “Defund, dismantle, destroy ICE” in a third tweet.

Regarding UC Berkeley’s tweet, alumnus Astrid Scholz tweeted that “I am equal parts proud and horrified that my alma mater was compelled to tweet this.”

Member Jason Prado of the Democratic Socialists of San Francisco even called ICE’s presence on campus “dangerous” in another tweet.

“The same organization is threatening to harm and deport your students and staff,” he declared. “Nothing that says CBP or ICE should be allowed on campus. Your actions are extremely tone deaf and border on dangerous.”

“Fuck the whole UC system but especially Berk*ley,” one user wrote, while another scoffed that it is “just a normal school system inviting the Racism Police to give a quick chat to billionaire's children about how to survive getting a pat down.”

One user even went so far as to compare ICE to WWII-era Nazis, tweeting, “why would you allow the gestapo at your campus[?] remove those scum.”