As part of a Valentine's Day celebration, UCLA will host a presentation by the UCLA Sex Squad, a theater troupe that faciliatates conversations around "taboo topics."

The group hopes to "shift the stigmatized culture around sexual health." 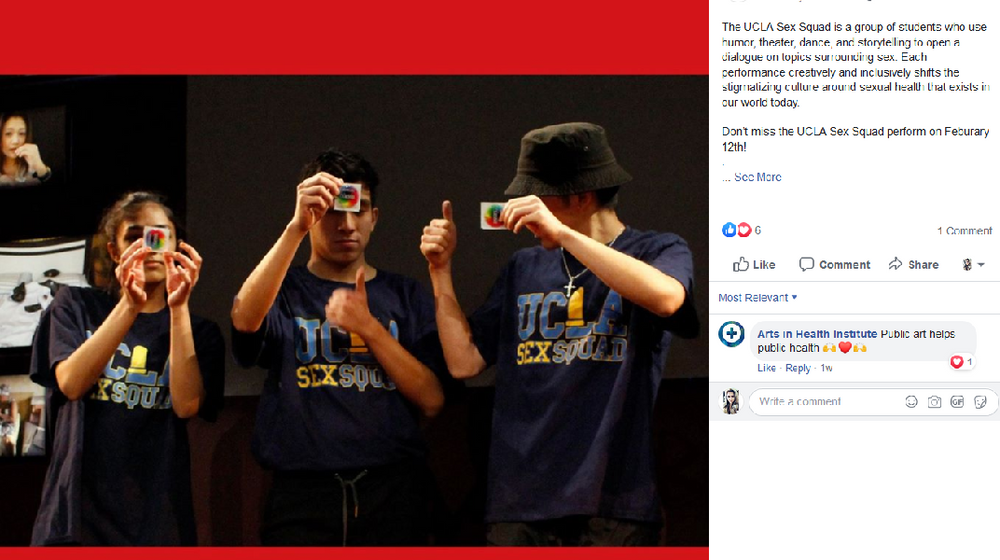 The Fowler Museum at UCLA hosted the Valentine’s Day-themed open-mic night featuring “Condom Couture” artist Adriana Bertini and the UCLA “Sex Squad.” The event will conclude a month-long presentation of Through Positive Eyes, a sprawling photography display created by more than 100 people living with HIV/AIDS.

Organized by UCLA’s World Arts and Cultures/Dance Department, the night promises food, drinks, and music while speakers share stories of art and "activism."

"I want my art to be visible everywhere, reminding people of the necessity of HIV prevention," Bertini told UNAids. “I prefer working more with the figurines because I noticed that they make people think about the meaning of ‘Wear against AIDS’.”

Also featured at the event will be the UCLA “Sex Squad,” which will be showing off one of its newest performances.

The squad describes itself as a group that "use[s] humor, theater, and storytelling to open up urgent conversations on taboo topics surrounding sex" and "aim[s] to creatively and inclusively shift the stigmatized culture around sexual health that exists in our world today.”

“As a group, they choose the most significant topics on which to focus their art-making,” their website explains. “The Squad spends the fall creating engaging and interactive skits, poems, songs, dances, and any form of performative art you can imagine!”

“We believe in inclusivity,” the group further explains, “and pushing back against heteronormative and patriarchal approaches that affect the LGBTQ+ and female-identified communities, as well as other marginalized populations. . . We embody a philosophy of collaboration over individual genius, channeling the power of the collective. We view human beings as innately artistic and aim in our creative process to express rather than impress.”