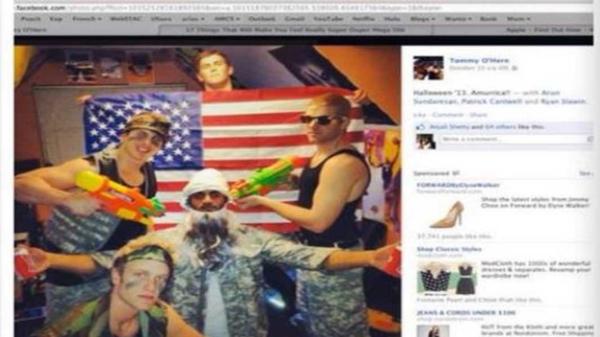 Washington University (WU) hosted an event called "Racism and Islamaphobia" in response to a student who dressed up as Osama bin Laden for Halloween.

Controversy ensued after photo surfaced last Wednesday of students dressed up in traditional military clothing pointing squirt guns at a student in a bin Laden costume with an American flag in the background, according to Student Life, the school's official student newspaper.

Some students defended the photo as a representation of the Navy SEAL Team 6 capture of the terrorist leader.

During Thursday's event, hosted by the Muslim Students Association (MSA), students shared their experiences with racism and ideas for how to prevent "inflammatory" events in the future.

"The silence on the part of the administration and majority of our student body speaks to the systemic nature of the challenges to our university's principles of inclusion and equality," said MSA president and senior Ishaq Winters.

Vice Chancellor for Students Sharon Stahl expressed her apologies for the delayed reaction to the event.

“I am the person, the only person, to whom this posting was sent on Halloween; I made a grave mistake in not responding sooner than I did. I deeply regret that,” Stahl said. “If I could go back and undo this, I would, but I can’t, so I have to accept the responsibility of my mistake. I apologize, and I hope that moving forward you will be able to find it in your hearts to give me that grace.”