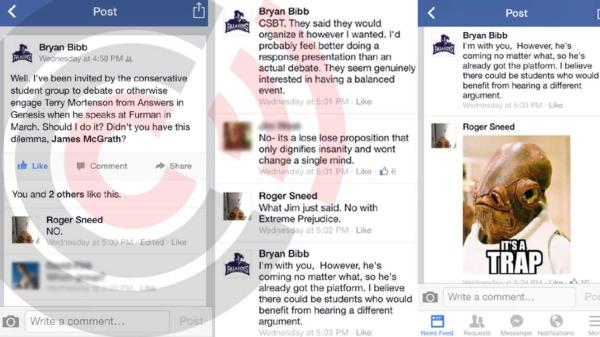 A group of professors at Furman University used Facebook late last month to openly mock a student group’s effort to bring a creation vs. evolution debate to campus.

The group, Conservative Students for a Better Tomorrow (CSBT), sought to replicate the viral Ken Ham vs. Bill Nye debate by bringing Answers in Genesis lecturer and researcher Dr. Terry Mortenson to campus.

The group then extended a debate invitation to Furman University Religion professor Dr. Bryan Bibb, who took to Facebook to gather his colleagues’ opinions.

“Well. I’ve been invited by the conservative student group to debate or otherwise engage Terry Mortenson from Answers in Genesis when he speaks at Furman in March. Should I do it?” Bibb asked.

“NO,” and “It’s a trap!” responded Roger Sneed, a fellow Religion Department professor.

“They’re seeking you to give legitimacy to a completely [expletive laden rant redacted] load of foolishness,” he said.

Professors from a variety of departments lampooned the conservative students’ offer and their views.

“No. Don’t dignify the stupidity by acknowledging it,” posted Margaret Oakes, Associate Professor of English.

“We are strongly disappointed that we could not find a single professor that would entertain the concept of creation science,” Elliot Stegall, Chief Executive Officer of CSBT, said in an interview with Campus Reform.

“When we respectfully asked for help, our professors turned to their personal social media pages to ridicule and discredit our student organization.”

Professor Bibb, in screenshots obtained by Campus Reform, did acknowledge that CSBT seemed “genuinely interested in having a balanced event.”

“I believe there could be students who would benefit from hearing a different argument,” Bibb posted.

Despite claims of intellectual diversity at Furman University, CSBT was unable to receive sponsorship from one professor for the creation science event, which will take place Wednesday evening. Lacking a professor sponsor means no academic credit will be offered to students in attendance.

Past events that have received both academic credit and faculty support are “The Lost Art of Pencil Sharpening” and “Exploring Gender Performance,” the latter of which was a lecture by a drag queen performer.

Full disclosure: the author is the former CEO of CSBT.