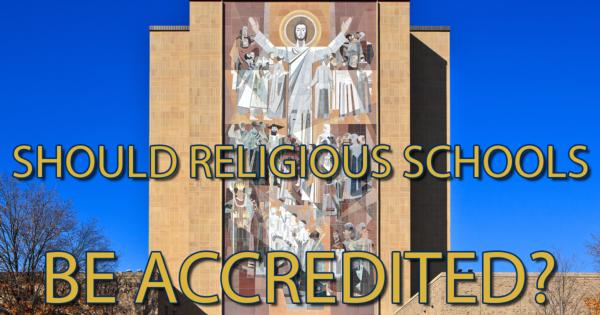 University of Pennsylvania professor Peter Conn argues that religious schools should lose their accreditation because they “systematically undermine the most fundamental purposes of higher education.”

Conn argues in his editorial, “The Great Accreditation Farce,” that the religious nature of these institutions contradicts the spirit of “skeptical and unfettered inquiry.”

"If accrediting agencies are playing by the rules in this continuing fiasco, then the rules have to be changed."

The English and education professor singles out faith statements that some religious schools require faculty to sign, such as Wheaton College in Illinois, and argues that many other religious institutions “draw lines around what is regarded as acceptable teaching and research.”

The Higher Learning Commission of the North Central Association of Colleges and Schools, which accredited Wheaton, told Conn that it is required to “respect a wide range of institutional missions and belief systems in its accrediting processes” through federal regulations and its own policies.

“This, in my view, can only be described as a scandal,” Conn wrote. “Providing accreditation to colleges like Wheaton makes a mockery of whatever academic and intellectual standards the process of accreditation is supposed to uphold.

“If accrediting agencies are playing by the rules in this continuing fiasco, then the rules have to be changed—or interpreted more aggressively, so that 'respect' for 'belief systems' does not entail approving the subversion of our core academic mission by this or that species of dogma.”

Conn contends that he has no “particular objection to like-minded adherents of one or another religion banding together, calling their association a college, and charging students for the privilege of having their religious beliefs affirmed.” However, he does object to “legitimizing” such institutions, “conceding that the integrity of scholarship and teaching is merely negotiable,” and “the expenditure of taxpayer dollars in support of religious ideology, [particularly one that] has set itself in opposition to the findings of modern science.”

Via The Daily Pennsylvanian