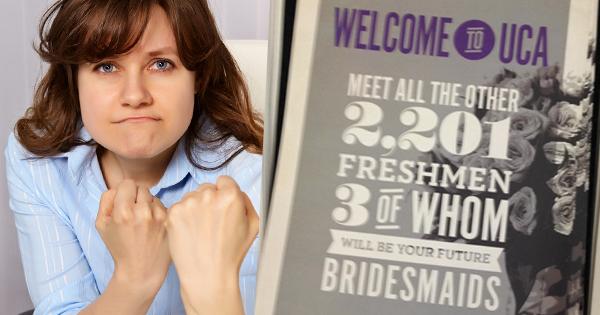 Feminist students at the University of Central Arkansas have received increased attention since school resumed in late August for their reactions to a poster intended to welcome UCA’s Class of 2018.

The posters—which were approved by administrators and students, according to the university—were hung throughout the halls of campus buildings and read: “Welcome to UCA. Meet all the other 2,201 freshman, 3 of whom will be your future bridesmaids.”

Administrators said the posters were meant to accentuate UCA’s tight-knit community and let freshman know that college is often a place where lifelong friendships are formed.

Christina Madsen, UCA’s Associate Vice President for Communications, told the local NBC affiliate KARK that the posters had sparked “nothing but positive feedback.”

“They [alumni] are coming and telling us that I met my husband on campus or yes, all of my bridesmaids came from UCA and it was 20 years ago or some people said 40 years ago,” said Madsen.

Some feminists, however, argued that the message was a comment on marriage and took to Twitter to express their anger.

“Because marriage is ALL.WE.THINK.ABOUT at college! @ucabears #womenlead Oh, where’s the one about groomsmen?” read one tweet, according to The College Fix. Another suggested the posters failed to “represent @UCAbear’s progressive spirit.”

One student expressed her disapproval by simply posting a note beneath a poster hung in UCA’s Lewis Science Center.

“The women of Lewis aren’t here for a Mrs. degree, try a different Department,” read the note.

Additionally, UCA’s campus newspaper, The Echo, published a staff editorial on the controversy, arguing that the posters are a comment on “women’s purpose.”

“While the intentions may be good, there are a lot of implications for our society at large here,” wrote one author for the Echo, adding that “as a woman I feel that being expected to get married and have three bridesmaids is isolating. I would be perfectly satisfied with never getting married, and I know many other people feel the same way.”

Zach Lachowsky, a senior at UCA and president of the campus Young Americans for Liberty chapter, said that for the most part students appeared to be unaware of, or unfazed by, the controversy surrounding the posters. 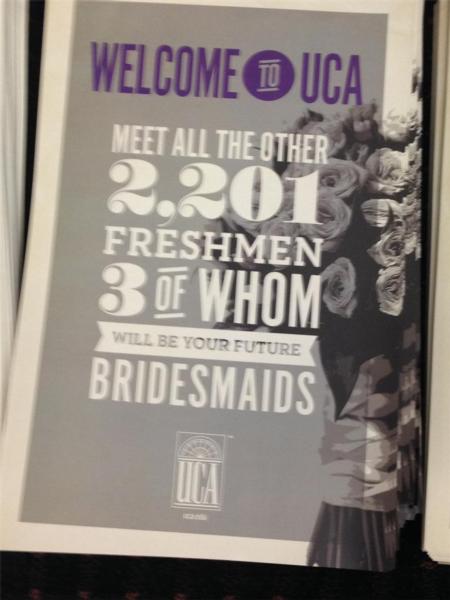 However, Lachowsky has also noticed how easily students are offended on campus and believes UCA’s strict speech code only compounds the problem.

“We have a free speech zone which is about a 50-foot radius around a chapel in the middle of campus and sometimes we get harassed while we’re in the free speech zone, Lachowsky told Campus Reform. “Censorship is kind of a big problem here.”

UCA has been given a “red light” rating from the Foundation for Individual Rights in Education which means the university has “at least one policy that clearly and substantially restricts freedom of speech.”