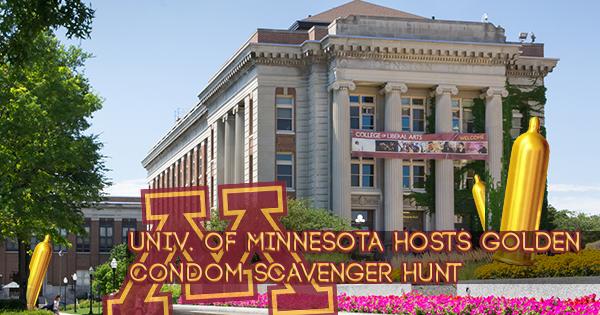 A golden condom is hidden somewhere on the University of Minnesota campus and students are on the prowl to find it.

Organizers of U of M’s “Golden Condom Scavenger Hunt” are using the program to promote Safer Sex Week at the university despite admitting “it doesn’t have to do too much with sexual health.”

“It does have a condom so at least people know we are associated with condoms."

“It does have a condom so at least people know we are associated with condoms,” Paige Anderson, a junior and a Sexual Health Awareness and Disease Education (SHADE) coordinator at U of M told Campus Reform.

Throughout the week, SHADE’s Facebook page and U of M’s newspaper, the Minnesota Daily, are providing students with daily clues on the condoms whereabouts.

SHADE’s Safer Sex Week is an annual event hosted the week before Valentines Day to promote services that the group provides. These resources include giving out safer sex supplies, including condoms and dental dams, peer HIV testing, and education about sexual health to Greek life and residence halls, Anderson said.

SHADE is a student group on campus that “spends the majority of its time addressing safer sex strategies for those who choose to be sexually active,” according to their website.

Galactic Bowling for Condoms, a sexual health trivia night, peer HIV testing and a sexual health movie featuring “The Sessions” about a 38-year-old man trying to lose his virginity are included in the other events taking place during Safer Sex Week.