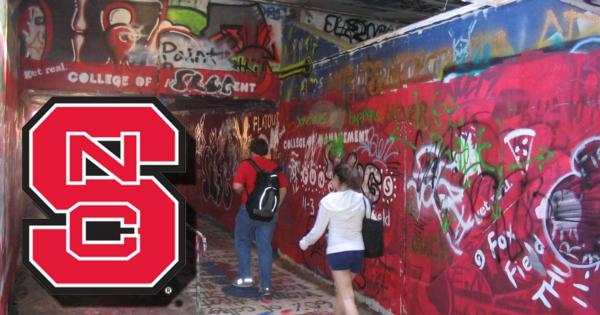 A North Carolina State University administrator is encouraging student leaders to censor speech they don’t like in a tunnel dedicated to free speech on campus.

In an email sent to all student group leaders Friday evening that was obtained by Campus Reform, Eileen M. Coombes, Director of Student Involvement, encouraged students to be creative while fighting against “social injustices and other forms of hate.”

"If you see hate speech or offensive language in the Free Expression Tunnel, cover that speech with the stencil, indicating that you, as a member of this community of scholars, will not stand for any form of hate at NC State."

“One way to do so is through the new ‘State not Hate’ stencils now available in Student Involvement,” Coombes said in her email. “If you see hate speech or offensive language in the Free Expression Tunnel, cover that speech with the stencil, indicating that you, as a member of this community of scholars, will not stand for any form of hate at NC State.”

According to NC State’s website, the Free Expression Tunnel was built to curb random acts of graffiti around campus.

“The Free Expression Tunnel gives students a venue for expressing their thoughts and feelings about anything—from ‘Happy Birthday’ to announcing club and organization meetings,” the website states. “The tunnel never looks the same twice, as it is painted daily by various student groups.”

Coombes’s email was sent to student leaders in light of recent incidents on other college campuses that have gained national media attention. The University of Oklahoma’s Sigma Alpha Epsilon fraternity chapter was recently disbanded and two students were expelled after a video surfaced online of a few fraternity members chanting a racist song.

“As we look for ways to advance our campus with a focus on inclusion and community, student organizations will be critical,” Coombes said. “Who will lead? Who will be champions for NC State’s core values of integrity, freedom, respect, responsibility, stewardship and excellence?”

“This is a blatant attack by [the Office of] Student Involvement instructing students to censors others’ speech on campus,” Ross Bradley, a senior at the university and the leader of NC State’s Young Americans for Liberty chapter, told Campus Reform. “In a spot where free speech is supposed to be respected, our school is suppressing our rights.”

Coombes did not respond to a request for comment from Campus Reform.

UPDATE: In an email to Campus Reform after publication, Coombes said the stencil was developed by both students and staff and "perfectly aligns with the current practices in the Tunnel." Coombes said that it's up to the students--not the university--to define offensive language.

"At the end of the day, we want our students to feel empowered to set the standard for our Wolfpack community and the stencil is just another method we've provided to combat speech with another form of expression," Coombes told Campus Reform in an email.