Mizzou football players strike, call for president to be fired 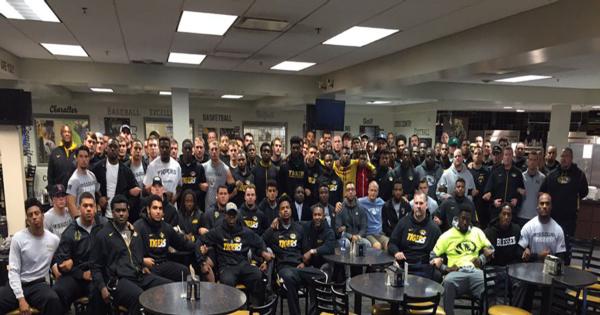 The Mizzou football team has become a hot topic in the mainstream media in recent days, but not for reasons like winning football games.

Football players at the University of Missouri are actively boycotting the season until the school complies with a list of demands, including increasing “the percentage of black faculty and staff members campus-wide by 10 percent” by the 2017-2018 academic year, as well as creating and enforcing “comprehensive racial awareness and inclusion curriculum throughout all campus departments and units, mandatory for all students, faculty, staff and administration.”

The boycott was sparked by an incident in which Mizzou graduate student Jonathan Butler embarked on a hunger strike, refusing to eat until the school’s president, Tim Wolfe, is fired.

A portion of the football team joined their fellow student in solidarity, but rather than refusing to eat, the players are refusing to practice or play football.

The Legion of Black Collegians tweeted a statement saying, “The athletes of color on the University of Missouri football team truly believe, ‘injustice anywhere is a threat to justice everywhere.’ We will no longer participate in any football related activities until president Tim Wolfe resigns or is removed due to his negligence towards marginalized students’ experiences.”

Anthony Sherrils, a defensive player for Mizzou, also tweeted the statement along with, “We’re black. Black is powerful. We may look different, but we are all #ConcernedStudent1950.”

#ConcernedStudent1950 is a hashtag that refers to a group that is currently coordinating protests, sparked by Butler’s protest, at Mizzou. According to the Concerned Student 1950 Twitter page, the group seeks, “liberation of black collegiate students.”

The head coach of Mizzou’s football team, Gary Pinkel, also stands in solidarity with his team as he tweeted, “The Mizzou Family stands as one. We are united. We are behind our players. #Concerned Student1950 GP.”

Russell Hansbrough, a running back for Mizzou, tweeted “We are in this together. Family. #OneMizzou,” and “There is no racial tension between the team and coaches. We are a FAMILY. Just to make that clear.”

While at first glance it appears the team is ‘united,’ one member of the football team, who chose to remain anonymous told ESPN "As much as we want to say everyone is united, half the team and coaches — black and white — are pissed.”

Skyler Roundtree, chair of the Mizzou College Republicans, told Campus Reform, “As an organization rooted in Civil Liberties, we are glad to see students vocalizing their beliefs. However, we must remember, that an offense taken does not guarantee an individual to be right.”

Roundtree also said that despite being a person of color, he doesn’t believe Wolfe should be fired.

“I am a twenty-year-old half-black & half-white male at this campus, [and] I too have endured racial slurs in my life; but the fault resides on the individual, not the system,” he said. “We cannot determine where we start in this life, but we can determine where we end up.”

Missouri Democratic Sen. Claire McCaskill, however, stated over the weekend that “There is systemic racism at Mizzou, adding, “What has happened is there has not been enough prioritization of this issue on campus.”

The University of Missouri system president Tim Wolfe released a statement on Sunday in which he acknowledged the ongoing situation but did not mention a resignation.

Mizzou’s next game is at Arrowhead Stadium against BYU on Nov.14. According to CBS News, canceling this game could cost the university over $1 million.