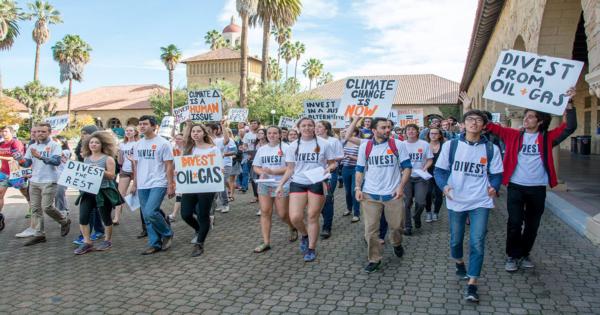 Five days after it began, the sit-in on the Main Quad organized by Fossil Free Stanford wrapped up with a rally Friday morning, just hours before the school pledged to remove the protesters by force, according to The Stanford Daily.

The administration had originally warned the students that their occupation of the Main Quad was a violation of school policy in a letter Tuesday night, only to receive a scoffing response the next day in which Fossil Free Stanford declared that they would gladly take the school up on its offer to demonstrate in another location on campus, but had no plans to leave the Main Quad area.

“As a participant in the Fossil Fuels Divestment Protest, an unscheduled and unsanctioned event, you are violating the university’s Use of the Main Quad Policy,” the school’s letter instructs the protesters. “In order to comply with university policy, you must leave the Main Quad with your belongings and the university is instructing you to do so.”

Explaining that the sit-in was preventing “the usual conduct of university matters in Building 10, which includes the offices of the President and Provost among others,” constituting a misdemeanor criminal trespass offense, the school strongly implied that the protesters should comply with the directive in order to avoid criminal charges, though it gave no specific deadline.

Fossil Free Stanford responded with a letter mimicking the format of the school’s missive, in which they delivered an ultimatum of their own, reiterating their demand that the school divest from the rest of the fossil fuel industry, not just coal, and implying that by doing so they can avoid the negative repercussions related to climate change.

“In order to comply with Stanford University’s mission and Fundamental Standard, you must immediately divest from the rest of the fossil fuel industry,” the group writes. “Please make sure you are aware of the potential consequences of catastrophic climate change and continued investment in the fossil fuel industry. Can you accept the consequences of your own inaction?”

They then thank the administration for “temporarily [waiving] your usual restrictions on free speech” in White Plaza to allow them to demonstrate, and say they will indeed utilize the space to join with protests organized by black and transgender students.

“We will remain in front of Building 10, though, specifically to call for action from President Hennessy and the Board of Trustees,” they add. “We will continue to hold our administration accountable. This movement is not going away.”

Having been rebuffed in its attempt to negotiate a conciliatory resolution, the university followed up Thursday night with an even sterner warning, this time stating specifically that the protesters would have until 5:00 p.m. Friday to vacate the Main Quad.

The second letter also stated that the university “is considering suspending Fossil Free’s request to APIRL [Advisory Panel on Investment Responsibility and Licensing] until they are in compliance with university policies,” which would amount to a flat rejection, albeit a reversible one, of the group’s demands.

In a response published by The Stanford Daily Thursday, Fossil Free Stanford announced that they would be concluding their demonstration ahead of the school’s deadline, but rejected the notion that they were doing so in order to avoid the threatened disciplinary action, saying they were merely “heading home to spend time with our families.”

They concluded their response, somewhat absurdly, by challenging the university to “come charge us at 11 a.m. in our encampment,” rather than waiting until 5:00 p.m.

Ignoring the dare, President Hennessy instead agreed to meet with the students Friday afternoon, telling them that while he agrees with them regarding the threat of climate change, he could not promise that he would be able to persuade the Board of Trustees to follow through with full divestment.

“Quite frankly if I asked SCIR [Board of Trustees’ Special Committee on Investment Responsibility] on to do divestment, they would say no,” he said. “I will tell you completely honestly, [complete fossil fuel divestment] has no chance of passing because it has no background research.”

While the students may have found Hennessy’s response disappointing, the administration should have a reprieve from further unrest during the next week, because not only will many students indeed be heading home for the Thanksgiving break, some of the more strident activists will be departing Sunday to attend the United Nations climate conference in Paris, The San Jose Mercury News reports.

The timing of the sit-in, vis a vis the UN climate summit, is not coincidental, as the group acknowledged from the beginning. As detailed in a recent report by the National Association of Scholars, the Stanford movement is just a small part of a larger national campaign to promote radical action at that summit.

“When Stanford University announced in May 2014 that it would divest direct investments in coal, but would leave all mutual and commingled funds intact, and wouldn’t touch oil and gas investments at all, activists sent up a victory cry,” the report notes.

Yet when Georgetown University made an identical commitment the following year, the NAS documents the student group GU Fossil Free and other divestment advocates scolded the school for attempting to win public relations points with a half-hearted concession.

Meanwhile, as divestment efforts escalated around the country in anticipation of the upcoming UN summit, the report notes that Fossil Free Stanford “has back-flipped into angry dissatisfaction with the university,” publishing a press release on October 6 vowing “civil disobedience” if Stanford does not commit to full divestment, a threat that was carried out with last week’s sit-in.

Although the leaders of Fossil Free Stanford declare that they “are not going away,” it remains to be seen whether the movement will be able to regain steam when students return from vacation and no longer have the potential of influencing the UN climate conference to serve as a motivating force.