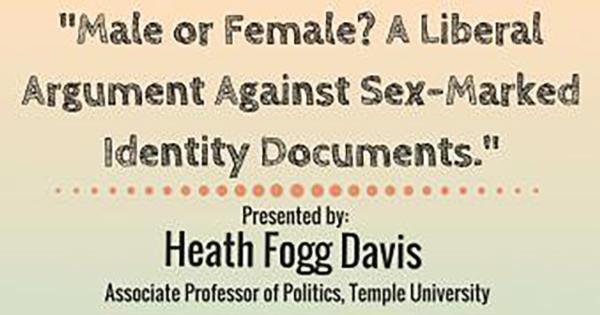 A professor from Temple University recently told students during a talk at the University of Virginia that sex markers are “poor proxies” because “maleness and femaleness are characteristics that we share with a lot of other people.”

Associate Professor of Politics Heath Fogg Davis made the remarks during a presentation Friday entitled “Male or Female? A Liberal Argument Against Sex-Marked Identity Documents,” which was sponsored by UVA’s Department of Politics and the “Women, Gender and Sexuality Bernard Mayes LGBTQ Lecture Series.” 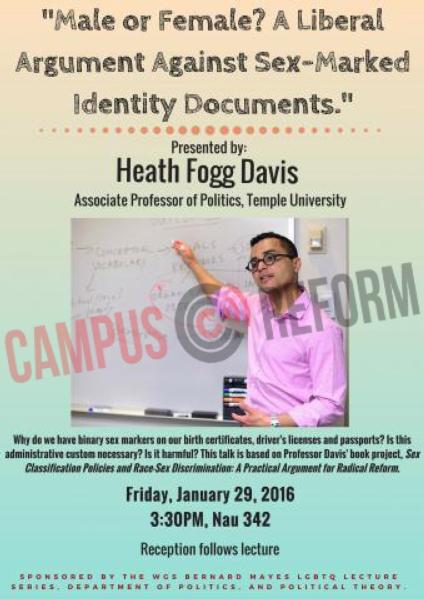 Davis began his presentation by discussing the bus system in Philadelphia, which once required employees to note the gender of bus pass holders based on a visual evaluation. While Davis said the city implemented this policy to stop fraud, particularly husbands and wives sharing the same pass, he derided the policy as “heterosexist in assumption” and something which seemed “like a relic from another time…nonsensical,” saying it “has been discontinued, thankfully.”

After listing scenarios in which people must provide their sex, such as applying for loans or mortgages or taking a test drive, Davis rhetorically asked, “were the sex markers relevant in those particular transactions?” His answer was “chances are, they weren’t.”

Davis insisted that sex markers are “poor proxies” because “maleness and femaleness are characteristics that we share with a lot of other people.” When generally describing people’s perception of one another via other forms of identity, he stated, “we see ourselves and other people as black women, as Asian men, for example. We never see ourselves apart from race.”

Describing sex identity as “a mutable characteristic,” Davis said that one can “reject binary sex altogether” and “identify as both male and female.”

With regard to birth certificates, which require a listing of the newborn’s sex as male or female, the professor said that this “is also problematic and something we should question.” He cited the labeling of mother and father as “harmful” because these parents don’t “self-identify” that way and “some transgender men can bear children.”

Recognizing that these are minority experiences, Davis said that non-discrimination law is supposed to guard minorities, and suggested that hospitals “could change this paperwork to say, you know, ‘the delivering parent,’” a term which “wouldn’t compromise or hurt anybody in the process.”

Davis then went on to assert that opponents to “changing bathrooms and letting trans people use the bathroom that aligns with their self-definition” argue “crazy things like that we have to sort of inspect people’s genitals…to make sure that you’re in the right restroom, which is bizarre.”

The professor said he has changed some of his own government identity files, but not others, and expressed disconcertment with the government keeping track of changes people make to their sex.

Campus Reform asked Davis whether removing sex from official documents would make law enforcement searches for criminals more difficult, to which he responded that, when reporting criminals, “it would be more specific and more helpful to say that it’s a masculine-appearing person.”

While the talk had approximately 50 student, faculty, and Charlottesville residents in attendance, some students came to the event to fulfill a requirement imposed by the University of Virginia’s Intro to Gender and Sexuality class. Campus Reform also spotted an attendance sheet, on which six students of the Anthropology department’s Language and Gender course had written their names.