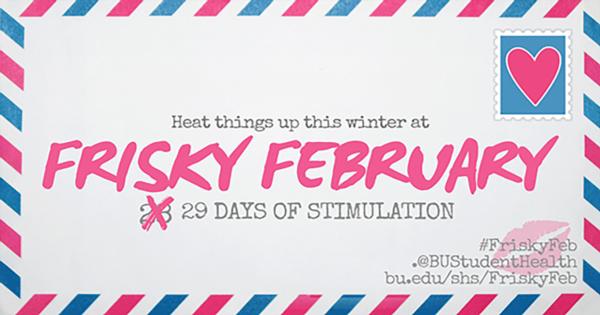 Students at Boston University (BU) who are looking to spice up their February have to look no further than BU’s "Frisky February: 29 Days of Stimulation."

The month-long series of events, sponsored by BU’s Wellness & Prevention Services (WPS) and Student Health Services (SHS), kicked off the month of February with SEXTalks that SHS describes as, “TEDTalk style lectures on sex, sexuality, and relationships.”

“Get up close and personal, and maybe get your hands a little sticky and glittery!”

Among the eight speakers was Rev. Cameron Partridge, BU’s Episcopal chaplain, who came out as a transgender man fifteen years ago, and spoke about “Coming Out as Spiritual Practice.”

“He'll suggest that despite the difficulties that many of us in the LGBTIQ community have had from within religious/spiritual communities, coming out itself can be a profoundly spiritual process of confronting our fear, letting it go, and claiming afresh the lifelong process of becoming who we are,” states the official event page.

Dr. Patrice Oppliger also presented a talk on, “Whatever Happened to ‘No Glove, No Love?’” The description says that she will address the surprising absence of condoms in television, film, and advertising and, “Show a clip of the Kardashians.”

Frisky February organizer, Ava Marinelli, told Campus Reform that the attendees of SEXTalks will also have a chance to win a “sex-tastic swag bag” which includes a sex toy, condoms, personal lubricant, a Condom Fairy magazine and temporary tattoo, and more.

Also happening is the “Sex Is Like Pizza”party. The event page calls it, “a discussion about consent,” where BU students will design a pizza with their partner.

“Sex Is Like Pizza is a sex-positive communication workshop,” Sarah Voorhees, a health and prevention educator at BU’s Sexual Assault Response and Prevention Center, told BU Today. “BU students can attend with a partner or a friend to find out more about how the process of making a pizza is all about consent.

The event is based on a TEDTalks by sexuality educator Al Vernacchio where he explains his issue with sex metaphors like “scoring” and “getting to first base.”

“The problem is, this frames sex as a competition, with a winner and a loser. Instead, he suggests a new metaphor, one that's more about shared pleasure, discussion and agreement, fulfillment and enjoyment. Let's talk about … pizza,” the TEDTalks description states.

“Get up close and personal, and maybe get your hands a little sticky and glittery!” Says the event page for Vulva Crafts with Goddess Celia.

“Join Goddess Cecilia and Voula the Vulva [made using pieces of curtain material, floral decorations, and a pool noodle] in an exploration of uniqueness and pleasure! You will learn about the different parts of the vulva, touch a variety of adult toys, and explore your own individual pleasure. Before the night is over, you will be able to take home your very own Vulva Craft!” the event page says.

Frisky February had it’s debut at BU last year and was so successful, according to BU Today, that it has, “returned to enliven the shortest month of the year.”

One of last years most popular events, Hogwarts Sex Ed, was a course that used the Harry Potter books to discuss consent and safe sex. Michelle Goode, an intern at BU’s WPS, told BU Today, “[The students at Hogwarts] are seriously lacking in sex education. There’s no way in reality that there would be so many students from 11 to 17 who are not engaging in sexual intercourse or activities.”

WPS director, Katharine Mooney, told BU Today that the goal was to reach a different and more diverse array of students, “Those who might not come to a wellness sexual health event at other points in the year.”

Ava Marinelli told Campus Reform that the Frisky February events are funded by BU’s Wellness & Prevention Services, “However, we are very proud to have kept our budget very low thanks to the generous donation of services and participation from many individuals and organizations.”

Other events during 29 Days of Stimulation include Sex at Sunset: Nacho Average Trivia Night which includes free nachos and “#sexswag”, Terrier Love: A Relationships Workshop, and Safer Sex Decathalon where you can, “Challenge your friends to a series of "minute to win it" challenges about sexual health, safer sex, sexual orientation, and more.”