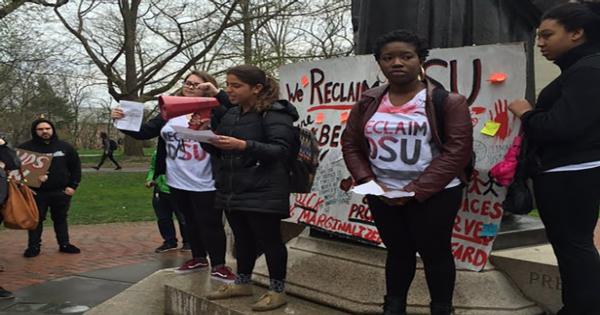 A sit-in at Ohio State University (OSU) has been cut short after the administration threatened to arrest or expel about 70 protesters who refused to leave Bricker Hall after repeated warnings.

The sit-in, organized by “ReclaimOSU,” began Wednesday in protest of OSU reportedly refusing to be “completely transparent” with where the university is investing its money. The group issued demands prior to the sit-in saying they wouldn’t leave Bricker Hall until the demands are met.

“We. Are. Being. Starved... They want us to waver in our convictions. But we are strong.” 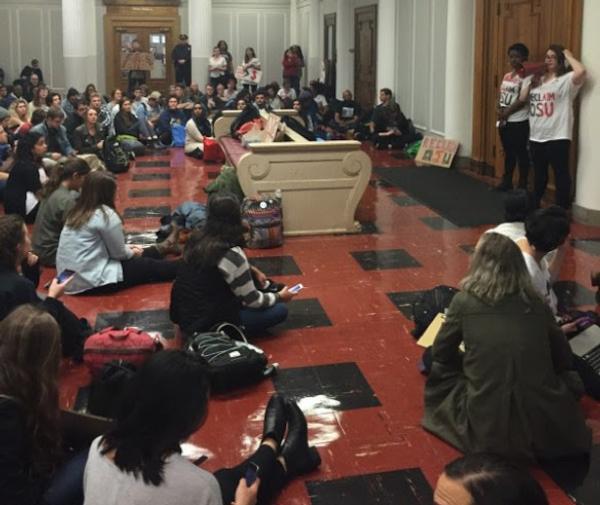 The demands include, “complete, comprehensive and detailed access to the Ohio State budget and investments,” and personnel to help students understand this information, to divest from corporations involved in “well-documented human rights abuses in the Occupied Palestinian Territories and across the globe,” as well as increasing the production and use of locally produced food and for OSU to stop outsourcing jobs.

According to a Facebook post by Real Food OSU, the protesters had intentions of staying in Bricker Hall all night, yet this was disrupted around midnight when they were threatened with expulsion and arrest by Jay Kasey, the vice-president of OSU.

In a video provided to NBC4, Kasey warns the protesters that they have one last chance to clear the room, to which a student responds, “What do you mean clear the room?”

As the students left, they reportedly sang protest songs.

Shortly after, OSU issued a statement to NBC4 saying that the students “chose to disperse on their own volition” and not with use of force after repeated discussions and warnings as their “occupation of this building was illegal.”

“The methods employed by this group were outside the scope of permitted practices...We made accommodations for this group to peacefully assemble, and they were free to leave at any time,” the statement says.

Earlier in the evening, tensions flared when students tried to bring food to the protesters in Bricker Hall and were subsequently stopped by police.

A video posted to Twitter of the exchange purports that “Cops [were] shoving protesters when we tried giving food.” However, shoving and audio are mysteriously missing.

After the sit-in ended, some students took to Twitter to voice their concerns and frustration over being forced to leave and the way in which the university handled the situation.

“We. Are. Being. Starved. They intentionally turned off the A/C. They want us to waver in our convictions. But we are strong,” Sierra Reese said.

On Thursday morning, students and faculty wrote an open letter to the university chastising the administration for how they handled the sit-in. As of press time, there are over 120 signatures.

“What our students did last night is in the long tradition of struggles for justice. What our Administration did is in line with a history of powerful institutions fearful of being challenged and of changing. We stand with #ReclaimOSU,” the letter says.