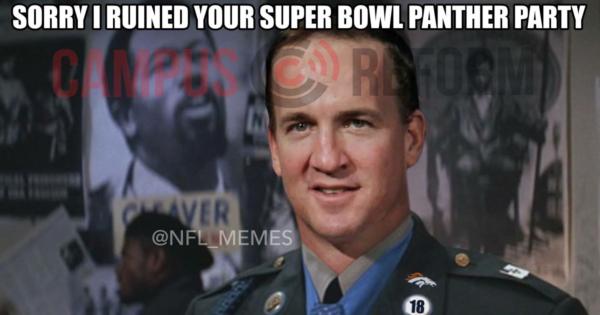 A student at North Carolina State University was hounded by his school’s Greek life organizations for posting conservative-leaning content on his social media accounts, but ultimately dodged impeachment after agreeing to undergo a variety of university-sanctioned punishments.

Student Greek leader Harrison Jenkins, who currently serves as the vice president of standards for NCSU’s Inter-Fraternity Council (IFC), has been subjected to verbal intimidation and harassment ever since he openly criticized a guest speaker who reportedly cited white supremacy as the foundation of America.

“I don’t know what I can and can’t say anymore. Where’s the tolerance of dissenting opinions?”

“This keynote just stated the foundation of America is white supremacy. This is beyond ridiculous. #AFLVcentral,” Jenkins posted to his Facebook in reference to the official hashtag of an “Association of Fraternal Leadership and Values” conference he was required to attend—a post that was later condemned in calls for his impeachment, which ridiculed Jenkins’ for his “blatantly offensive views” that stand “in complete opposition of university values to welcome, support, and respect the dignity of all people.”

Some time later, Jenkins shared a meme of Peyton Manning after the Denver Broncos’ Super Bowl victory over the Carolina Panthers to a group text conversation with Greek leaders he had been introduced to at the conference.

“Sorry I ruined your Super Bowl Panther party,” the meme stated, referring to a popular scene from Forrest Gump in which the movie’s protagonist finds himself in the midst of a Black Panther meeting—another post that was used as grounds for impeachment.

Jenkins told Campus Reform he woke up to calls that night from fellow Greek life members expressing their anger with the meme, and received a call the following morning from IFC’s president, who stated that he would be asking for Jenkins’ resignation, but Jenkins refused.

So, as Jenkins had requested, he was granted his due process rights and testified before the executive board of the IFC, of which he was a member. After a hearing lasting nearly three hours, Jenkins barely escaped impeachment in an 11-10 vote.

Before the hearing, however, leaders from three other NCSU Fraternity and Sorority Life (FSL) organizations wrote to the IFC urging its leaders to impeach Jenkins.

“We are not trying to violate Mr. Jenkins[‘] freedom of speech, as we are in a place of higher education, it is important to allow students to express how they feel,” the Multicultural Greek Council (MGC) wrote to the IFC in a letter obtained by Campus Reform. “However, there is also a sense of accountability and need to create a safe space in which people do feel accepted.” 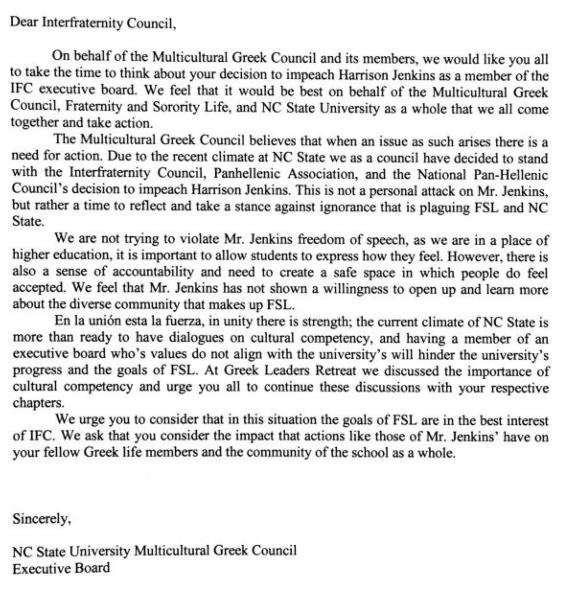 “We arrive at this decision as a board because we feel that while Harrison has a right to his own opinion, there is a difference between having an opinion and having an opinion that is accepting of the opinions and realities of people of other cultures and races that we ourselves cannot attest to because that is not our lived experience,” it stated. 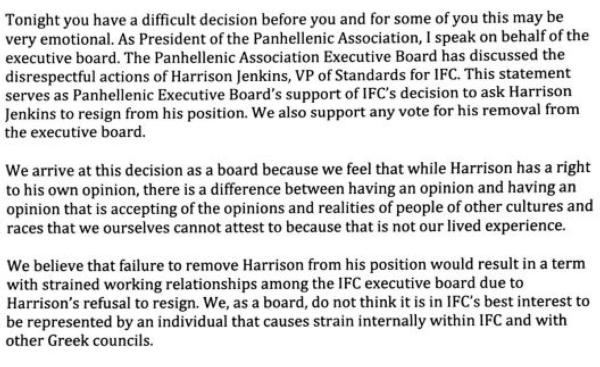 “Jenkins’ pattern of cultural incompetence and inability to embrace university values of diversity and inclusion renders him unfit for a position of leadership,” NPHA wrote in its statement before going on to vehemently oppose Jenkins’ use of the Peyton Manning meme.

“I assure you that there is nothing funny about this action. This post was unwarranted, unacceptable, and ill received by members of the NPHC community and several others in the chat,” a member of NPHC’s executive board stated in its letter to IFC. “Harrison effectively took a symbol of pride, power, and hope in an entire race and made a mockery of it with the symbol of a white privileged male in the top 1% of society.”

Ultimately, Jenkins avoided impeachment by a slim margin but was mandated to appear before IFC’s judicial board, which let Jenkins off the hook so long as he complied with a laundry list of disciplinary sanctions.

“I’ve talked to a lot of people and still to this day I don’t understand what’s wrong with it,” Jenkins told Campus Reform in reference to the meme. “It’s one of my favorite quotes from a humorous movie.”

Although the various FSL councils recognized Jenkins’ right to free speech in each of their respective letters, he maintains that his First Amendment rights were violated.

“I do feel in some ways they attempted to punish me for having an opinion,” he said. “I don’t know what I can and can’t say anymore. Where’s the tolerance of dissenting opinions?”

Campus Reform reached out leaders of MGC and NPHA but did not received a response in time for publication.