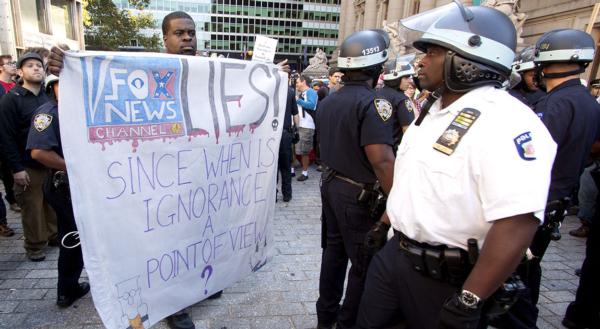 The University of California, Berkeley and a national Islamic organization have identified Fox News, National Review, and The Rush Limbaugh Show as elements of the “U.S. Islamophobia Network.”

Confronting Fear: Islamophobia and Its Impact in the United States, a study released Tuesday that was conducted jointly by the UC Berkeley Center for Race & Gender and the Council on American-Islamic Relations (CAIR) places the aforementioned news outlets in the Islamophobia Network’s “Outer Core,” which consists of “groups whose primary purpose does not appear to include promoting prejudice against or hatred of Islam and Muslims, but whose work regularly demonstrates or supports Islamophobic themes” (emphasis added).

“An individual should be free to choose to be a bigot, or not.”

“Islamophobic groups have enjoyed access to at least $205 million to spread fear and hatred of Muslims,” CAIR asserts in the report’s introduction. “The current environment that grants anti-Islam prejudice social acceptability must change so that such bias is in the same social dustbin as white supremacism and anti-Semitism.”

As an example, the document denounces a Texas high school teacher for “virulently anti-Muslim materials” including statements like “Islam is more of an ideology than a religion. It is also an ideology of war” and “[Islam forces] its ideology on cultures and ultimately on the world through propaganda, subversion, and even physical force when it is deemed necessary, one area of the world at a time.”

Even some outspoken liberals come in for criticism, including Bill Maher, who is described as “the liberal counterpart to Fox News when it comes to broadbrush attacks on Islam.” Real Time with Bill Maher, along with ABC Family’s cancelled Alice in Arabia, appears under a section entitled “Islamophobic Media.”

“Mainstreamed Islamophobic rhetoric was legion during the 2015 nomination phase of the 2016 U.S. Presidential Election,” the report continues, shifting to the subject of politics. Shockingly, the list of politicians accused of Islamophobia consists entirely of Republicans like Jeb Bush, Ted Cruz, Ben Carson, and Donald Trump.

UC Berkeley states that it aims to advance “Islam’s principle of ‘be a benefit to humanity, avert harm from humanity,’” explaining that “Islam teaches its adherents to care about the needs of people from all backgrounds.”

The school then lists Black Lives Matter as a cause “deserving expanded Muslim involvement.”

The report “advocates social, not legal, consequences for prejudiced thought and speech,” disavowing any desire for legal restrictions on Islamophobic speech and instead placing reliance in social pressure.

“An individual should be free to choose to be a bigot, or not. However, just as anti-Semitic or white supremacist speech is anathema to society, so too should be Islamophobic speech,” the two organizations argue. “Association with anti-Muslim movements or rhetoric must discredit its advocates’ participation in legitimate, mainstream public discourse.”

According to the report, the only reason such reactions are lacking currently is that the Islamophobia Network has managed to imprint its views on mainstream American society.

“For too long the discourse about Islam in the United States has been dominated by the abnormal interpretation of the faith embraced by both violent extremists and the U.S. Islamophobia Network,” the report claims. “This abnormal interpretation is simultaneously used to justify atrocities and policies that undermine America’s ideals of inclusiveness and equality under the law. The U.S. Islamophobia Network has effectively supported undermining the Bill of Rights for all Americans [in order] to achieve the goal of vilifying Muslims.”