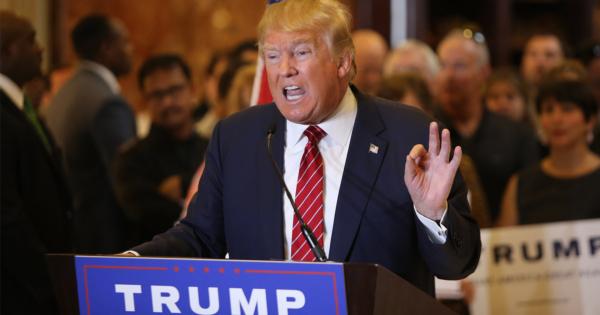 “Many faculty, staff, and students have expressed disappointment and anger at Mr. Trump’s appearance on our campus,” President Pam Shockley wrote in a letter to the campus community Thursday.

"Protest with me by reserving 2 free tickets and not going!"

While Trump’s visit will go forward as planned, hundreds of students are planning to protest the event, saying “there is no room for hatred and ignorance in our community.”

Donald Trump's message is toxic,” they added. “Donald Trump has continuously said hateful and racist things, and that is not what this country, or Colorado Springs stands for. We must stand together, unified in peace, acceptance, and love.”

Notably, some students have revealed plans to protest the event by reserving several of the free tickets but skipping the speech altogether.

“Donald trump will be at UCCS tomorrow,” one student posted to Twitter. “Protest with me by reserving 2 free tickets and not going! Tickets available on his website.”

Donald trump will be at UCCS tomorrow. Protest with me by reserving 2 free tickets and not going! Tickets available on his website.

“Hey folks, Drumpf is coming to UCCS,” another said. “I got 2 tickets in protest (no way I'm going). Take all the seats you can!”

Additionally, KKTV 11 reports that fliers have been hung up around campus encouraging students to participate in a walkout Friday afternoon.

Students aren’t the only ones furious with Trump’s appearance, however. In fact, more than 100 professors wrote an open letter in protest of Trump’s visit, stopping just short of calling for the complete cancellation of the event.

“While we recognize Mr. Trump’s right to speak at UCCS and at other public venues, we strongly condemn the content and tone of much of the rhetoric that Mr. Trump has used since announcing his bid for Presidency,” they wrote in a letter obtained by The Colorado Independent. “We contend that his divisive language prevents the kind of civil discourse that is the life blood [sic] of a democratic society.”

UCCS is no stranger to political tension, though, as one professor recently pointed out in a book about conservatives on college campuses.

“Professors may hear people say things in the faculty lounge or the hallway, mocking comments about conservatives and their intelligence...they’re afraid if they reveal their politics their colleagues would view them in the same way as other conservatives,” UCCS professor Joshua Dunn recently told Campus Reform.