Safe space 'conversation' 'not intended to be an open discussion’ 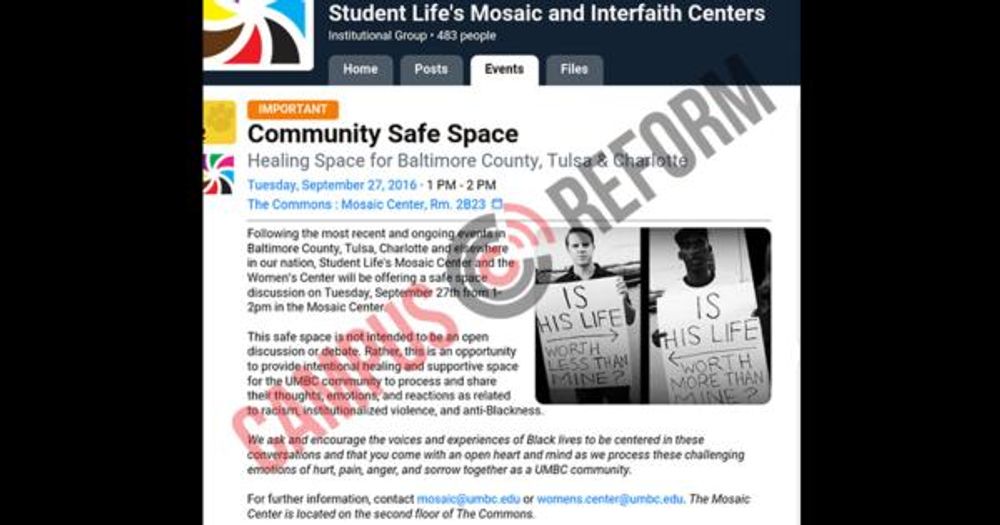 The University of Maryland, Baltimore County is hosting a “community safe space” where the “voices and experiences of Black lives [are] to be centered in these conversations.”

A description for the event, however, notes that the “safe space” is not, in fact, “intended to be an open discussion or debate,” despite previously calling it a conversation.

“Rather, this is an opportunity to provide intentional healing and supportive space for UMBC community to process and share their thoughts, emotions, and reactions as related to racism, institutionalized violence, and anti-Blackness,” it continues, leaving questions about the difference between sharing thoughts and having a discussion unanswered.

The school’s Women’s Center, though, has hosted several other “safe spaces” of this kind, particularly following notable police shootings like the one recently in North Carolina.

In response to the shootings earlier this year in Baton Rouge and St. Paul, for instance, another “community safe space” was offered to students, which likewise cautioned that the event was “not intended to be an open discussion or debate.”

An endnote to the description, however, states that “an additional safe space is being planned” due to popularity of the first one, and this time explains that students would be welcome to “propose solutions through an open discussion regarding Black Lives Matter.”

At least one other such “safe space” has been offered by the UMBC Women’s Center, that one addressing the death of Freddie Gray in Baltimore.

Campus Reform contacted the Women’s Center for elaboration as to the purpose behind restricting open discussion during the events, but did not receive a response in time for publication.