Both students allege that despite reporting these incidents, "the administration at SU has done nothing."

Recently, two Campus Reform correspondents have been the targets of multiple death threats and online harassment for being public about their conservative values.

Murray is no stranger to harassment. Campus Reform reported in February on Murray’s allegations that professors targeted her on social media. Now, Murray has begun receiving criticism on social media for allegedly “antagonizing” people of color. 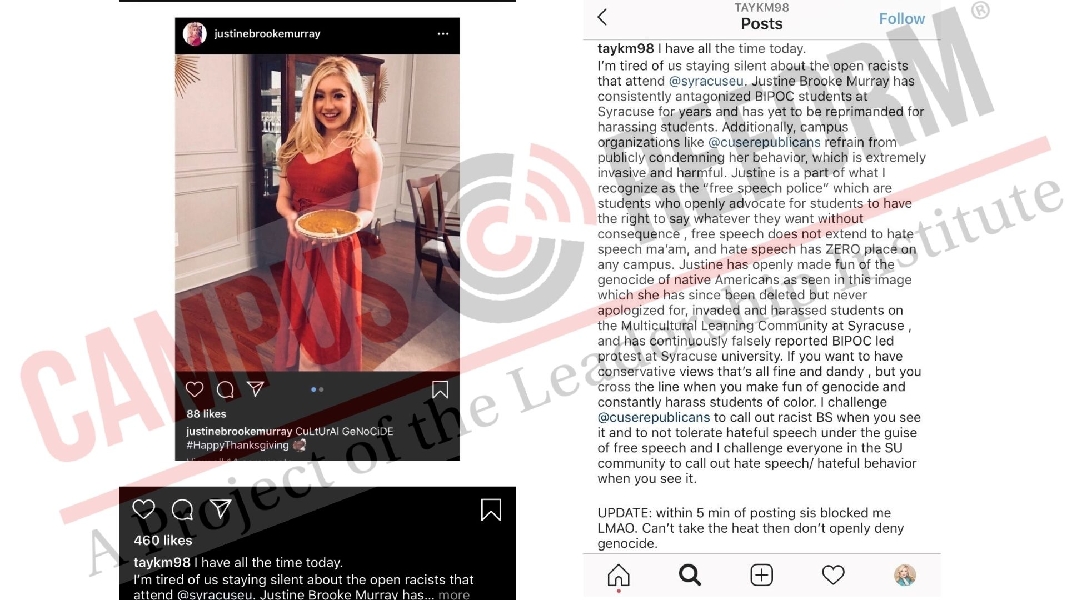 On June 21, SU alumna Tayla Myree posted a screenshot of a now-deleted Thanksgiving post of Murray sarcastically captioning her photo "CuLtUrAl GeNoCiDe  #HappyThanksgiving," joking of a leftist talking point referring to Thanksgiving as a celebration of cultural genocide.

“I’m tired of us staying silent about the open racists that attend @syracuseu. Justine Brooke Murray has consistently antagonized BIPOC students at Syracuse for years and has yet to be reprimanded for harassing students,” Myree’s post read.

Myree then criticized Murray for being pro-free speech, calling her the “free speech police.”

“Justine is a part of what I recognize as the ‘free speech police’ which are students who openly advocate for students to have the right to say whatever they want without consequence, free speech does not extend to hate speech ma’am, and hate speech has ZERO place on any campus.”

The post quickly spread on social media, gaining thousands of likes and hundreds of comments.

Murray’s social media quickly became flooded with death threats and other smears. One individual dedicated an account threatening to kill her titled, @basilkillsjustinebrookemurray. The culprit publicly called for her home address to be leaked, threatening to “cut u 2 pieces” and “ima kill u.” 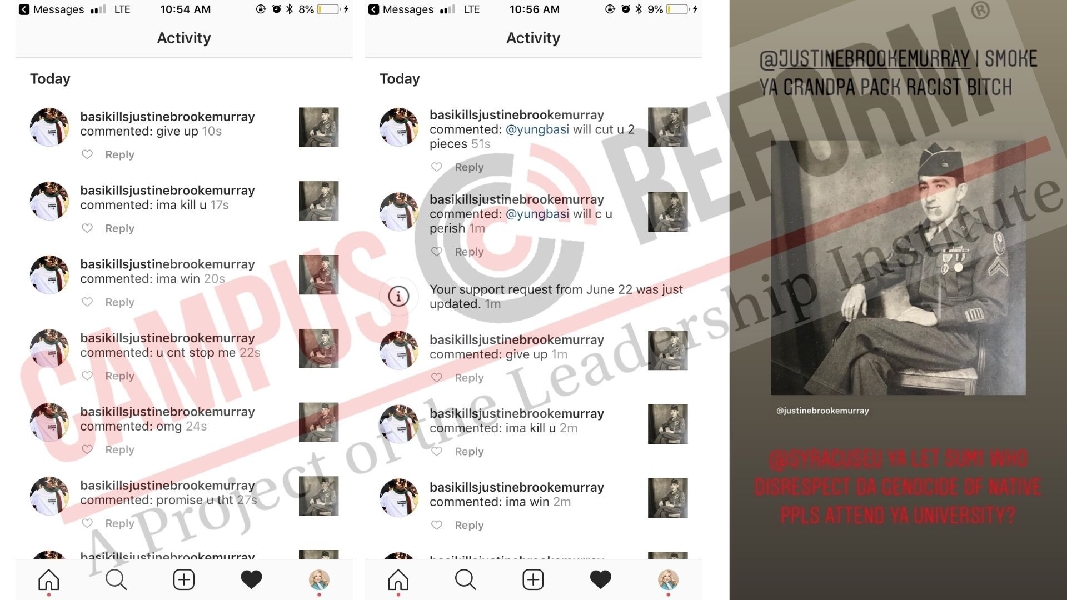 Murray told Campus Reform that this has been a common occurrence during her time at Syracuse:

“[I have been harassed] Since my first semester in my freshman year. It was instantaneous. A couple of the highlights included students banning me from what they called the 'multi-cultural floor' of my freshman dormitory because I dressed up as the First Lady for Halloween,” Murray said.

She then expressed concern for her safety and said the administration has not taken action.

“The administration at SU has done nothing.  The campus police keep taking reports from me and  I’ve been in touch with them repeatedly. They did get between me and the mob a couple of times. But they know the students involved and, to date, I know of no action taken against the ones who pushed me, intimidated me, or chased me,” Murray said in an email to Campus Reform. 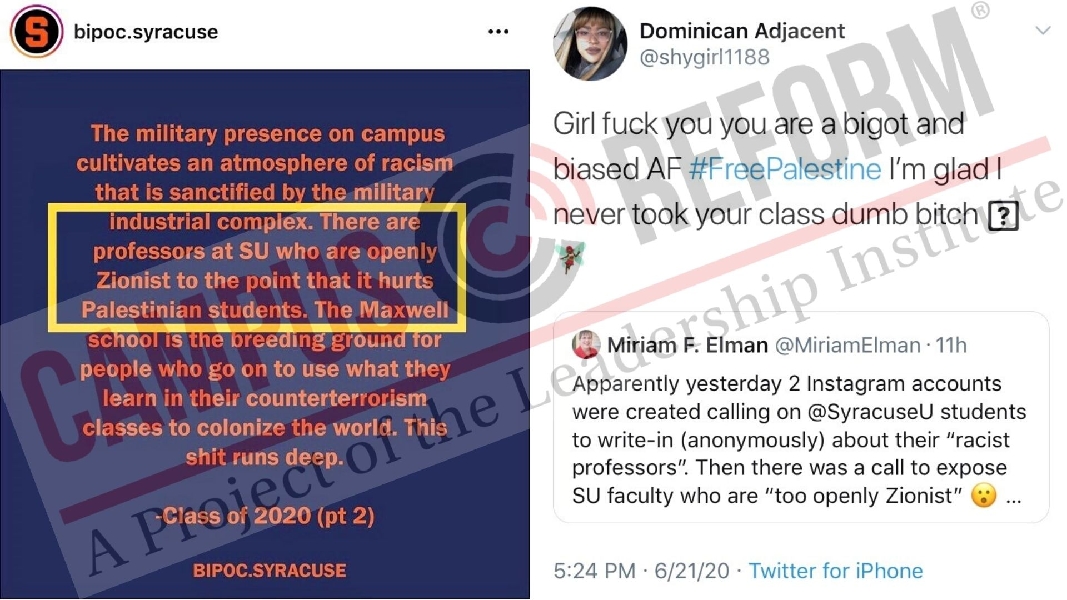 One individual took to Twitter accusing Elman of having “discriminated against many Arab students” and “islamophobia." One Instagram account, @Bipoc.syracuse, posted a story aimed at “openly zionist professors,” sparking a barrage of online attacks toward Elman, and accusations of her supposedly discriminatory behavior.

Soon after, Elman allegedly received an email, obtained by Campus Reform, in which she was called a “fat, white Judeo-Christian Zionist supremacist Jew." The email also allegedly slandered her Jewish religion as a "racist cult."

Elman did not comment on personal allegations but told Campus Reform of her disappointment to see such posts.

“What could have been an invitation to thoughtful discussion and a valuable online platform for students to express their experiences with racism on campus and to brainstorm practical solutions, so quickly morphed into antisemitic attacks on faculty and students. To see Jewish professors and students targeted for their identity and faith is intolerable. To see this on a self-described anti-racist platform is truly disheartening,” Elman said in an email to Campus Reform.

Elman insisted that antisemitism is on the rise on campuses across America.

“On far too many campuses, Jewish students are being told that they have to check a huge chunk of their identity--Zionism--as the price that they have to pay to be admitted into progressive causes, coalitions, and campaigns. The trend we are seeing is an often intense intimidation, with Jewish students essentially being presented with an ultimatum from their peers: either shed an integral component of your faith, or face social ostracism.”

She alleged that people online threatened her with physical harm. One individual commented on her Instagram, “You better hope I don't see your ass cuz I swear I’ll fuck your shit up” and another privately messaged her, saying, “Hope you fucking die soon bitch”

When San Marco tweeted a picture of a transgendered woman who was killed at a protest, saying “she should be remembered as her biological sex not her delusion,” an individual promptly replied, “Disgusting. Hope the same is said to you when you get a bullet in the head for being racist.”

In a Twitter thread, another individual referred to San Marco as “that Wicked White Syracuse Bitch.”

“Please don’t let me see that Wicked White Syracuse Bitch in person that’s all imma say. I would love 5 minutes with the ugly racist bitch. Like you’re using my friends tweets for what? She said what she said. White people like this say absurd things just so other dumb and evil whites can co-sign them. I’ll beat the shit out this hoe though,” she wrote, encouraging people to “Beat Tf Out Of Racist White Bitches 2020.”

When San Marco tweeted about the threat, another Twitter user replied, “conservatives students deserve to get beat up… y’all ugly”

When confronted about this threat, the user directly advocated for San Marco to be physically assaulted. “Yes i want her attacked,” she replied.

More people took to Twitter calling for Syracuse to expel her for her conservative column.

“@SyracuseU this girl should, at the very least, be considered for suspension for incredible academic negligence. Is this how you teach your students? To create such a false conclusion based on one study debunked by its own writers? This is pathetic. Expel her,” the tweet read. 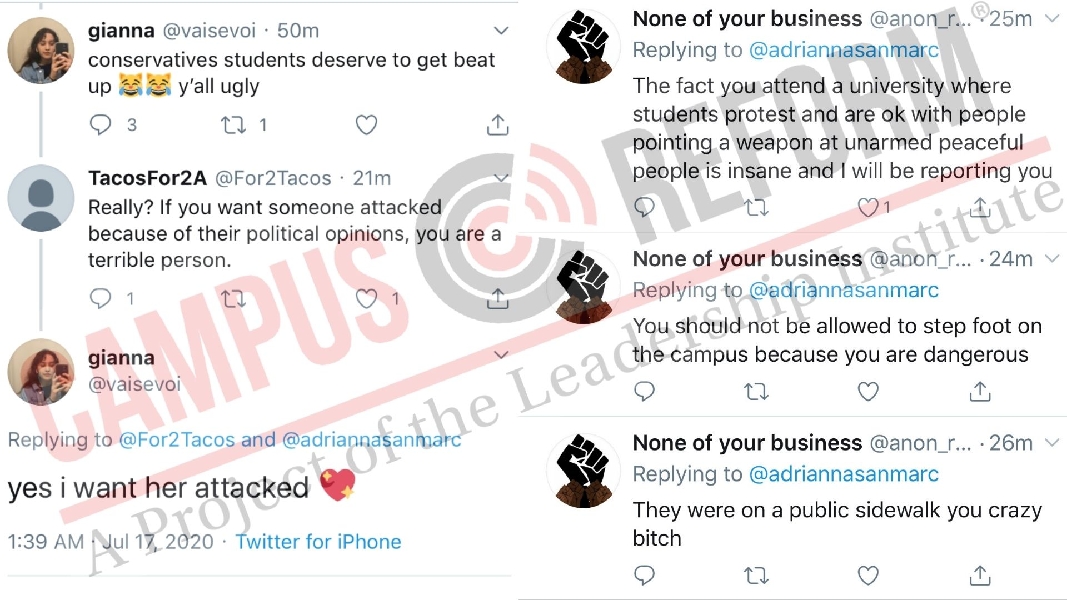 Another person threatened to report her, tweeting, “You should not be allowed to step foot on the campus because you are dangerous.”

San Marco said the SU administration has not taken any action against these threats. On June 24, she sent an email to the school Chancellor Kent Syverud and three other leaders at the university, expressing her concern for her safety.

“I have received countless physical threats by other students at SU and alumni alike. (read the attachments below). During this time I have made reports with The Department of Public Safety and spoken to officers multiple times. These reports don’t make me feel safer. They don’t assure me that the students targeting me will face consequences nor do they provide promise that these threats will not be carried out,” San Marco said in a letter to the school. 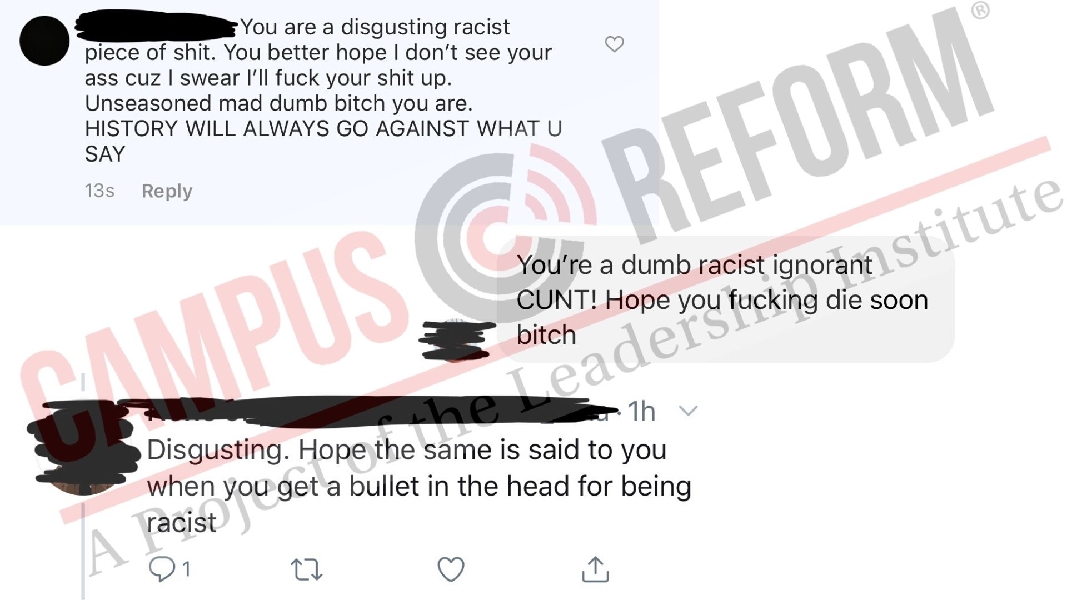 San Marco then took aim at the school for its alleged negligence. “I am fearful for my life on our campus and you are silent. As a student I am unsure whether I will return to campus this Fall. My family is terrified for me. My mother is afraid to read comments under my social media posts and my sisters have begged me not to return. This is what your silence has done. You have emboldened our community and led them to believe that they have full impunity to say and do whatever they please without consequence,” she added.

In an interview with Campus Reform, San Marco said she was initially not public about her conservative views for fear of the threats she has now received. “I have avoided being open about my views because I didn't want to experience the harassment that I'm getting now. The blatant hatred and harassment I have been receiving the past couple of weeks stem from the opinions piece I wrote in early June. I have received so many threats that returning to campus has become a real safety concern. I am fearful that someone will attack me while I'm walking home at night,” she said in an email to Campus Reform.

“The administration has been silent. I filed multiple reports with the Department of Public Safety at Syracuse University over the vile comments and messages I received, yet none of my administrators have reached out to me. In fact, last week I emailed multiple high-level administrators pleading with them to take action and protect their conservative students and they never responded.”

San Marco has now told Campus Reform she will be transferring out of Syracuse due to concern for her safety.

“I will not be returning,” San Marco said. “It’s just not safe on campus right now, unfortunately.”

San Marco posted a letter to Twitter explaining her decision:

“My time on Syracuse University’s campus has come to a close. After continued silence from administrators and further degration [sic] to my safety I can no longer justify returning to campus this fall,” she wrote.

Syracuse did not respond to request for comment in time for publication.

Addison Smith the Host of “In Focus with Addison Smith” on One America News Network. He was previously a Campus Reform Reporter, covering liberal bias on college campuses. Addison previously worked with Liberty University's Standing for Freedom Center as a social media manager, the College Fix as a student reporter, and was also a Campus Reform Senior Correspondent. Both he and his work has been featured in Fox News, Daily Wire, Breitba...