The event, hosted by Emory’s Goizueta Business School, included a performance by a progressive theater group and opportunities intended for students to discuss racial issues.

Students attending a virtual orientation event via Zoom were asked by facilitators to put their racial identity next to their Zoom name.

Newly admitted students attending a virtual orientation event hosted by Emory University's Goizueta Business School were asked by facilitators to put their racial identity next to their names on a Zoom call.

According to a statement made to Campus Reform by a Goizueta spokesperson, the orientation event was titled “Building and Maintaining an Inclusive Community” and featured “Out of Hand Theater," an Atlanta based theater group that was recently featured by the New York Times for its work in addressing “racial inequity.”

The statement said that the theater group “provide[d] introductory equity and diversity training using the tools of theater” to the new business students. Their presentation “was followed by group conversations around diversity and racial equity” where students and staff “were asked to voluntarily self-identify their race if they felt comfortable doing so.”

The Goizueta spokesperson told Campus Reform that facilitators asked those attending to put their race next to their name “to better facilitate effective group conversations" and that the purpose of the event was to “increase understanding and empathy for the experience of people of different identities and backgrounds.” 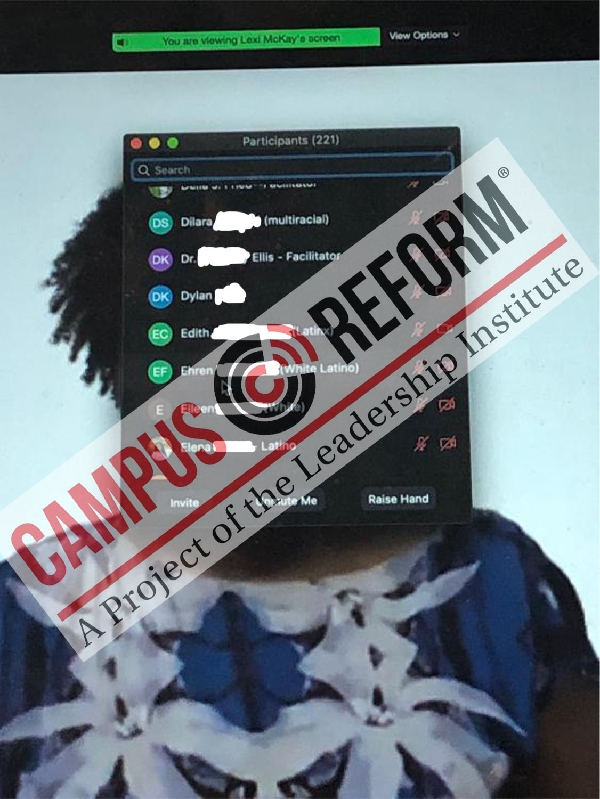 At one point, students were assigned to breakout groups, smaller video calls meant to make discussion easier, to talk about issues of race and inclusion. The groups themselves were monitored by “more than 20 professional facilitators," according to the Goizueta statement.

According to an anonymous student, the event itself lasted around two hours and had to do entirely with race and diversity.

[RELATED: This workshop teaches ‘white-identifying students’ 'what it means to be anti-racist']

Elena Castro, another student who attended the virtual orientation component, also told Campus Reform that students were “were asked by the main facilitator of the event” to include their race in their Zoom names.

She said that students “were asked by our facilitators in breakout rooms a number of questions” but that “unfortunately not all students answered," going on to state that it was primarily her and one other student “who led the conversations as the other students were not engaging that much.”

Castro stated that the room’s facilitator “could tell [it] was a bit awkward as students were not engaging in the conversation [as] she had hoped." She went on to say that she “thought it was a good attempt at trying to help students think about racial equity in the workplace” though “some students weren’t into it.”

In her statement, Castro told Campus Reform that the event’s main facilitator “wasn't anyone from the CMC or the [business school's] staff.”

The anonymous student mentioned earlier said that the breakout room also had very little discussion occurring, which they say prompted their moderator to accuse participants of something to the effect of not caring about black lives.