Three students were arrested after blocking traffic in Times Square during an anti-ICE protest.

Those involved protested an allegation of forced hysterectomies being done at ICE facilities.

ICE told NPR in response to the allegation that it "vehemently disputes the implication that detainees are used for experimental medical procedures." 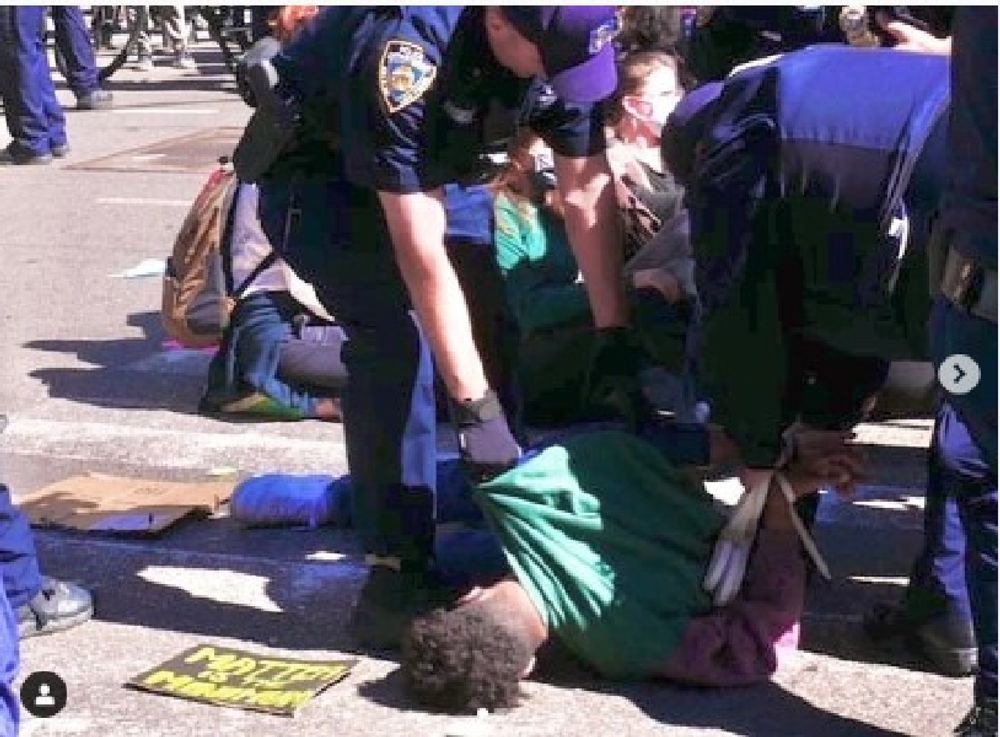 At least 4 New York University students were arrested during a Times Square protest against U.S. Immigration and Customs Enforcement (ICE).

The three NYU students arrested, Siegrid Tuttle, Sarah Smith, and J.J. Briscoe were arrested on charges of disorderly conduct, and obstruction of vehicular traffic and pedestrian traffic after police began rounding up protesters.

Tuttle, who takes part in the online publication to “track police brutality,” fightforjustice2020 told the Washington Square News that the police were already prepared to arrest them. “At that point, we were already surrounded by police — like, hundreds of police,” Tuttle said. “We were all just rallying and listening to speakers for 20 or 30 minutes. In that time period, 100, maybe 200 cops had surrounded us with bikes. I think they already had a paddy wagon out."

here i present a reminder of the true reality of the moment and the stakes that our country is in right now. to my knowledge, from the protesters against ICE there was no destruction, no violence, and no officers hurt. yet us protesters were the ones faced with violence and arrest while simply trying exercise our first amendment right. i only hope to further convey the utter simplicity of the matter. children are in cages not receiving proper education or health care, immigrant women are being sterilized, literal concentration camps are existing here in the US. and when we the people want to show our lack of tolerance for these crimes against humanity that are currently being conducted by our government, we are met with the irrational force of police brutality that only furthers tensions between the citizens and police and creates a problem more strenuous and taxing than any of us were anticipating that day. please don’t look away, internalize and seek to empathize with the injustices that are happening in this country. and instead of just becoming upset or hopeless, do something about it. the most immediate and effective thing you can do right this is second is to register to vote and seek to vote early. the link is in my bio. (p.s. just to mention, i am incredibly privileged with my experience of being able to leave jail the same day, not being permanently injured, and not experiencing many of the abhorrent injustices that go on throughout the American “justice” system) #nojusticenopeace #abolishice

Another student, Gladys Alberts described the events as “traumatic” and that, “The police started coming in, and it was really clear from the beginning that they were just yanking people out of there. There was no regard for physical health or safety. They were wielding batons, some of them. They all had guns.”

Protesters and participants reportedly told the Washington Square News that the protests were not advertised on social media to avoid added police presence, but according to Twitter and Instagram, the protests were widely known.

A Twitter page shared the event and location multiple times and shared footage of what appears to show protesters blocking off streets in and near Times Square and arrests being made both on September 16 and 19.

The Sept. 16 arrests were related to an event that involved the ambush of an Immigration Court building.

Campus Reform reached out to NYU and has not yet received a response.