Now, the College Republicans chapter at the school is calling out the sorority for its failure to contribute to a “healthy” campus community.

Her sorority asked her to evaluate her future posts, and she will have to watch a video from the sorority’s Diversity, Equity, and Inclusion Committee.

A member of a sorority at the University of Kansas is being sanctioned for her conservative posts on social media. 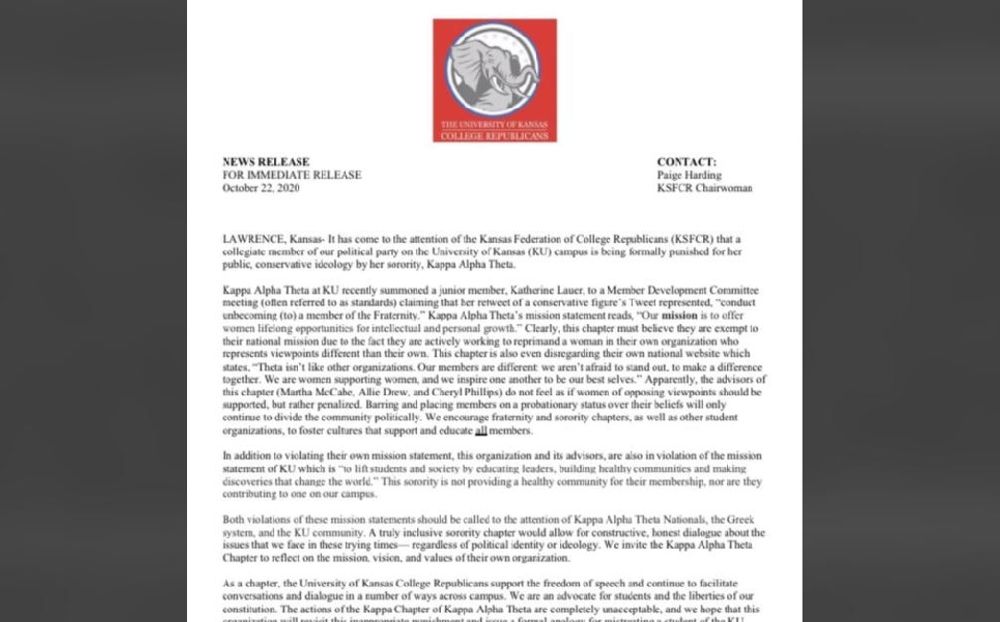 The University of Kansas College Republicans chapter has come out in support of a student who was reportedly placed on probation by her sorority for posting conservative content on social media.

Sophomore Katherine Lauer was reportedly disciplined by her sorority, Kappa Alpha Theta, for "argumentative communication (verbal or otherwise) with members as a result of your social media posts that disregards different opinions,” according to a letter from the sorority.

The College Republicans chapter came out in defense of Lauer in an official statement pointing out that the Kappa Alpha Theta national organization states that its mission is to “offer women lifelong opportunities for intellectual and personal growth.”

“Clearly, this chapter must believe they are exempt to their national mission due to the fact they are actively working to reprimand a woman in their own organization who represents viewpoints different than their own,” the group stated.

”Barring and placing members on a probationary status over their beliefs will only continue to divide the community politically. We encourage fraternity and sorority chapters, as well as other student organizations, to foster cultures that support and educate all members,” the group continued.

The group also claimed that the sorority was in violation of KU’s mission statement in that it “is not providing a healthy community for their membership, nor are they contributing to one on our campus,” and called for “both violations of these mission statements” to be “called to the attention of Kappa Alpha Theta Nationals, the Greek system, and the KU community.”

The statement was made in response to a letter, in which the sorority told Lauer to pause her social media use for one week while she completed a “personal reflection and cleanse.” She must also monitor her social media posts, asking herself whether her content would help or harm Kappa Alpha Theta, women of other races, or her own “personal brand.”

Lauer will also be required to watch a video selected by Kappa Alpha Theta’s Diversity, Equity, and Inclusion Committee to “get a broader education on America today.”

An image provided to Fox News by Lauer shows that she had reposted a Candace Owens tweet critical of Black Lives Matter on her Instagram story. When pressed by her sorority’s advisory board in a meeting, Lauer said that she shared the post “to shed a little bit of light on the transparency of the organization."

According to the letter, Lauer will be “reevaluated” during an Oct. 26 meeting.

"If at this meeting it is determined that you have successfully met all terms of probation and the advisory board feels that you are ready to become a member or new member in good standing, this extended discretionary probation status will be lifted.”

If Lauer does not comply with the sanctions, her membership in the sorority “could be up for termination, as voted on by members of the chapter.”

Campus Reform reached out to Lauer, Kappa Alpha Theta, and the University of Kansas for comment. This article will be updated accordingly.