A professor at the University of Wisconsin-Whitewater claimed on a class assignment that former President Donald Trump once expressed support for Japanese internment camps, according to one student.

The student provided Campus Reform with a screenshot of the comment, which the professor said was "revised."

A professor at the University of Wisconsin-Whitewater claimed on a class assignment that former President Donald Trump supported Japanese internment camps, according to one student in the class who provided Campus Reform with a screenshot of the post.

The post, which appeared on the university's virtual course portal page for the "Asian Americans" course, cites instances where Trump supposedly indicated he was in support of internment camps, despite including no sources to those claims.

The post titled "Could it happen again," stated, "Japanese Americans were sent to 'detention' camps solely based on their race. In an extreme act of racial profiling, over 100,000 innocent Americans were denyed [sic] their constitutional rights. About 30 years ago, Republican President Reagan signed a formal apology and said it was a terrible mistake that should never be repeated."

"Yet," the post continued, "the most popular Republican Party candidate for President recently said the Japanese internment camps were a good idea should be considered in the future, and survey data show that many of his supporters agree with him. What do you think?” 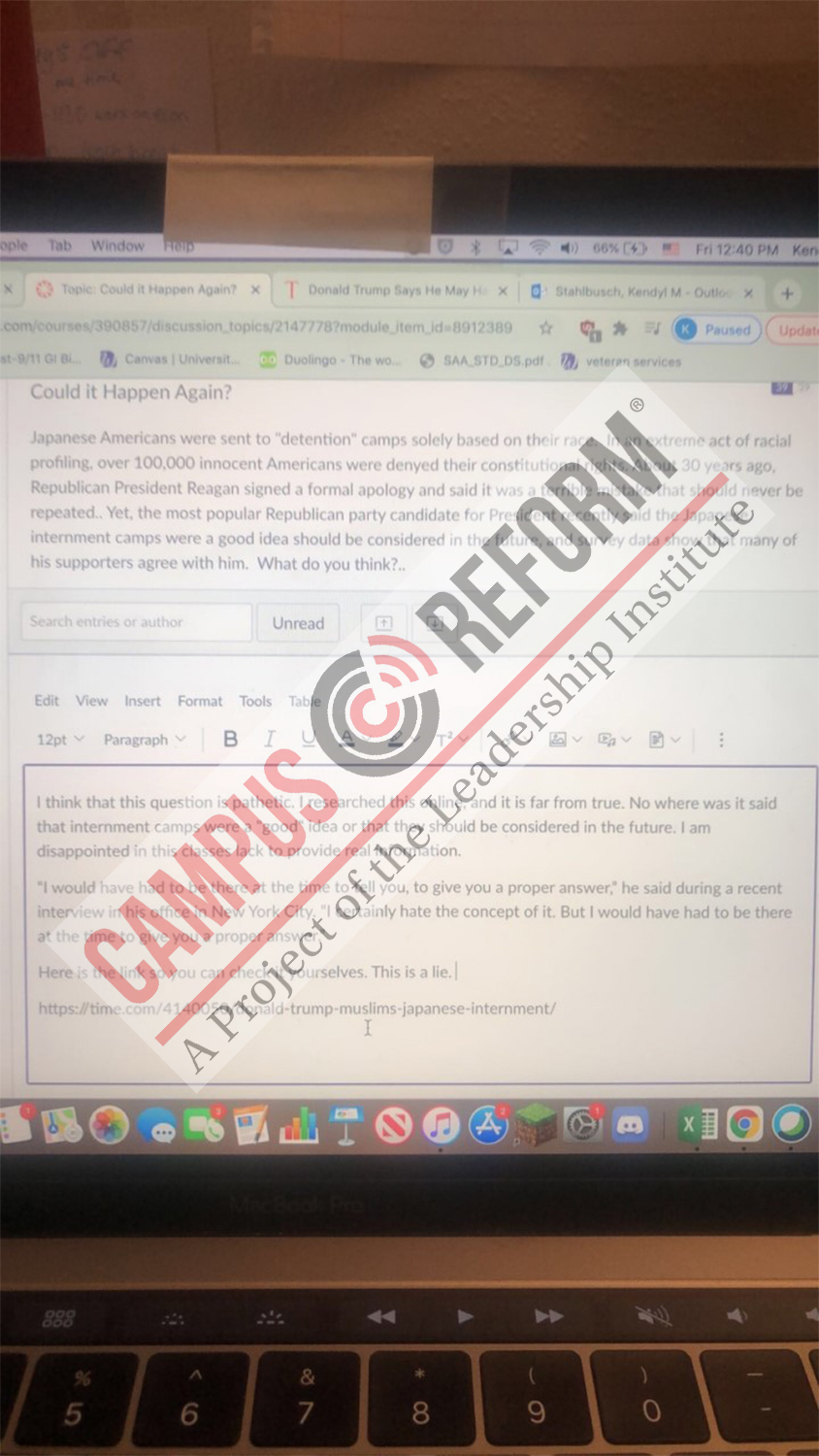 In a statement to Campus Reform, the professor of the course, Wenquan Zhang, said, "the course module is about 'Chinese and Japanese Americans,' in which we introduced the Japanese Internment during World War II."

"After receiving an email about the discussion question from one student," Zhang said the question was "revised."

“Japanese Americans were sent to 'detention' camps solely based on their race.  In an extreme act of racial profiling, over 100,000 innocent Americans were denied their constitutional rights.  Decades ago, Presidents Reagan and Bush formally apologized for it and believed that it was a terrible mistake that should never be repeated.  But others expressed ambiguity about whether to support or oppose the policy, and survey data show that some Americans believe that the Japanese internment was a good idea.  What do you think?”

Zhang continued by telling Campus Reform, "The purpose of the discussion question was to ask students to think about their own views.  This is not a partisan issue since Republican Presidents took the initiative to deal with it.  It is worth examining why public opinion is still divided on this issue, and consider how attitudes toward Japanese internment may be related to contemporary views about Chinese and Japanese Americans, which is the subject of this part of the course. Most students recognized the focus and engaged in the discussion accordingly."

When answering the question, Kendyl Stahlbusch, a student in the class, wrote "this is a lie." Stahlbusch told Campus Reform that the question "felt more like an exercise to persecute those who had voted for the Republican candidate."

"Furthermore, the question stated that all of 'his followers' (Trump's) believed that internment camps should be used again. I would love to know who they asked for those statistics, but it was obviously pathetic and extremely harmful to assume kids with conservative beliefs actually believe that," Stahlbusch said.

However, there's no evidence that Trump ever said the camps were “a good idea,” as indicated in the discussion post. During a Time Magazine interview with then-candidate Donald Trump in 2015, he said that he was opposed to the idea of internment camps, but added, “I would have had to be there at the time to tell you."

Also in 2015, during an ABC interview, Trump referenced former President Franklin Roosevelt's actions after the attack on Pearl Harbor when explaining the reasoning for his ban on Muslims who were not U.S. citizens from entering the country. However, Trump repeatedly said "no" when asked if he supported the concept of internment camps.

[RELATED: EXCLUSIVE VIDEO: Students SLAM Trump for 'kids in cages'...then find out Biden did it]

During an interview on MSNBC in 2015, when asked if he was proposing internment camps, Trump said "no."

"I am not proposing that," Trump said. "It was tough stuff, but it wasn't internment. We're not talking about the Japanese internment camps. No, not at all. But we have to get our head around a very serious problem, and it's getting worse."

Campus Reform reached out to the University of Wisconsin-Whitewater but did not receive a response in time for publication.